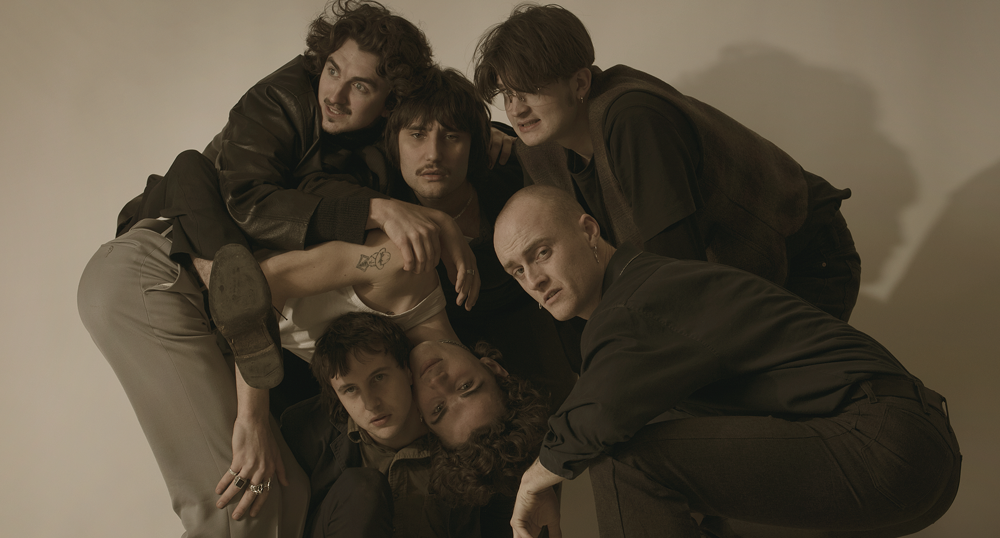 With a debut EP in the works, we asked the ever-evolving Opus Kink to make us a playlist. Give it a spin

Brighton band Opus Kink are geared up for a busy 2022. Made up of Angus Rogers, Sam Abbo, Fin Abbo, Jed Morgans, Jazz Pope and Jack Banjo Courtney, the six-piece have already ticked sold-out headliner at London’s 100 Club off the checklist and are earning widespread plaudits across the press landscape.

Shortly after the release of their riotous new single I Love You Baby, the first reveal from the enigmatic collective’s debut EP arriving this summer via Nice Swan Records, we asked Opus Kink to make us a playlist.

Speaking on the curation, the band wrote: ‘These ten works have influenced this Hopeless band one way or another either through shame, thievery, intimidation, arousal, confusion, accident, hope or occasionally fun. I would like to extend my most heartfelt thanks to the creators therein and hope that when they read this, which of course they all will, they will bow their own storied heads in acknowledgement of our group’s now undeniable influence on their own fading outputs and their wider social/inner lives. In the words of the ever hideous & masterful - I’ll be having that, and that, and that...’

Taha, MPBUH, the most rock and roll of the Algerian legends of Raï, has gifted us the melodic football-hooligan chorus and the pounding kick beneath wistful toplines.

Sometimes alone on the night bus I pretend to myself that I'm menacing and unhinged, and I listen to this. The illusion is shattered by day whilst Rowland's guitar continues eating itself like a malnourished innard.

If John Lurie considered the Lizards 'fake jazz' then what in heaven's name does that make us? I like horns and repetition.

All souls kneel before the lungs of Shabaka. Bless these mighty foghorns and the twin drums of power.

There is a chance that this is my favourite song. From it I have often stolen the sadness of a repeating minor chord pattern overlaid with a naughty chant.

This one is all about drums, restraint, openings and sexual frustration, much like life.

The Pop Group - We Are All Prostitutes

Yes we are and so let us do it in a disgusting gutter funk manner.

Some people prefer Charles Trenet, but have you heard the horn section, have you experienced the audacity of the key changes, have you seen the sunset hue of Iglesias' drum-tight face?

The Pogues - Turkish Song of the Damned

I admire the smashing together of styles & stories & the fact that the title came before the lyrics, born of a misprint in a magazine.

Saâda Bonaire - You Could Be More As You Are

'I saw you fighting and loving with men' is one of the great opening lines & you can't fault the layering of this beauty. I hope to steal from it one fine day very soon. Skål!