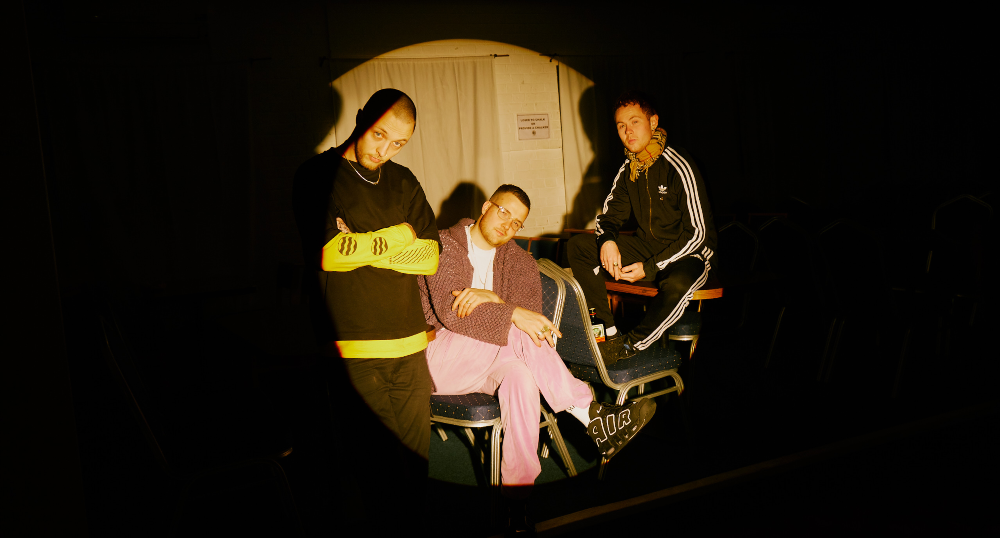 Kent punks Lady Bird have a raw signature sound that’s already attracted significant fanfare over the last few years. Now, gearing up for the release of their debut album WE, the band’s infectiously thrilling approach is building an even bigger buzz.

Teaming up with Alcopop! for their first full-length outing, WE embodies the essence of the three individuals that make up the band, demonstrating the collective creativity and spark that ignites when they come together to make music.

As we draw closer to the release of their long-awaited debut LP, we asked Lady Bird to make us a playlist to take us into the weekend.

Rage Against The Machine - Bulls On Parade

The moments when I watched Rage Against The Machine headlining Reading Festival in 2008 made a serious impression on me. The heavy yet relatively undistorted sound, slow and rock steady grooves/riffs and fire blaze bars all without doubt influenced the heavier songs on this record i.e. Karma, Factory Fool and BludSuckers.

The Libertines - Music When The Lights Go Out

As I described for the official Reading & Leeds hardback book this year, we were all present for The Libertines’ reunion show at Reading in 2011. We have had many conversation discussing the ways in which this band have shaped our growth, taste and output. This song in particular Joe would play on the guitar during breaks on recording sessions fo ‘WE’ do it would be silly to say that it hasn’t been woven in there somehow.

We adore Willie J and have fond memories of our time spent with him touring in 2018. There was definitely a point in time where his music became diffused with out taste and it was playing on repeat in the van and particularly in Alex’s headphones. Alex began exploring chords in a way he felt similar to Willie and came up with the title track of the album WE.

I first heard this track at the dinner table round Isaac’s mum and dad’s place, soon before all the madness unravelled. Whilst listening I went into one and became deeply inspired by the collaboration and the story of how the creation took place. It then led me to watch the Gorillaz live stream world tour which further influenced the way I write. Without doubt all my output is influenced by the work of Damon Albarn and I want to develop with dynamic and rapid evolutions just as he has!

This track I have listened to on repeat several times over which is rare for me, I love the whole album and feel the relationship of a Prince loving sister when I hear Charli’s stuff. But the epic reverb washed ballad hit me hard and so I took it upon myself to make a heavy rock ballad for this album, which you’ll hear at the very end entitled Say A Little Something.

The Streets - Turn The Page

How do you single out any material from The Streets, it’s all influential. Turn the page though is a particularly moving number for me, and I am learning when I listen to it. Mike Skinner’s approach to wording is something I always learn from, recycling words and bending academic constraints to find new ways of verbal sheep delivery… That’s my shit and I love it

BB King - The Thrill Is Gone

Absolute classic tune. All songs derive from this and LB things I have made pass through this channel way up stream.

Here in lies a pivotal influence for Lady Bird. Hammond organ is the hidden gem within any classic record. For a long time I’d been considering purchasing one to play in LB, then one day Dave Holman pops round to the flat Alex and I were living in at the time, and he brought us this record for our collection. It influenced me to buy and play the organ which has become a hallmark of Lady bird and features in Mullet and Say A Little Something on this album.

This band has in fact been the largest influencer of this album simply because it gave birth to the band, it is indeed Lady Bird’s mother, sister, and my most long-standing commitment to any band, Pecho Mama. Earthquake is a single from the group's latest show Oedipus Electronica.

BareFace was the band that became Slaves. Myself, Isaac and Laurie played as part of this band and it was the direct link between Lady Bird and Slaves. Further to this, Alex and Joe were both present and correct as fans of BareFace at all the early shows, this is in fact how we all came to meet each other. So this band and this song is without doubt a great influence on Lady Bird’s debut album WE.