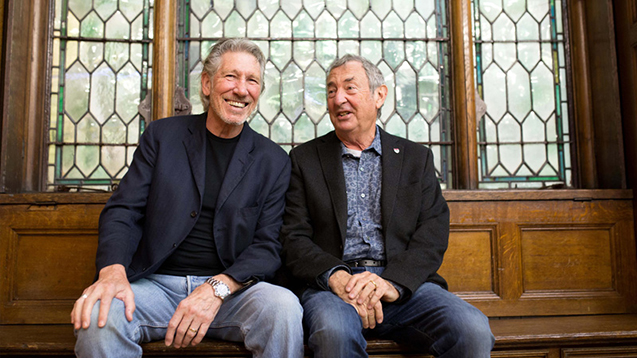 'The rate of closure is terrifying': Nick Mason on UK venues

The Pink Floyd drummer made the comments outside Parliament this morning, where leading music figures gathered in support of the Agent of Change bill being brought to the House of Commons.

Pink Floyd drummer Nick Mason (pictured, right) pledged his support for the Agent of Change bill outside parliament this morning (10 January), describing the rate of closures to UK music venues as 'terrifying'.

Mason was joined by artists including Sandie Shaw, Nadine Shah, Feargal Sharkey, Billy Bragg and Everything Everything’s Jeremy Pritchard in support of Labour MP John Spellar, who was set to propose the bill in the House of Commons.

Citing the role that The Cavern Club played in the early career of The Beatles, Mason told M: 'All bands and young artists need the opportunity to perform.

'The rate of closure of small clubs is terrifying, 35 percent have closed in the last decade.'

Speaking about how the Agent of Change principle could help to protect the future of venues, Mason added: 'If nothing else, it will concentrate people’s minds on the fact that there is something that can be done to support these venues, rather than just letting them disappear.'

Also in support was Feargal Sharkey, who told M: 'Like pretty much every other musician on the planet, my career began in the back room of a very small pub in front of about three people, one stormy night in November.

'The British music industry is built upon little venues and they need protecting, they need our support. It’s time we all stood up and made that very clear to the world around us.'

Elsewhere, Everything Everything's Jeremy Pritchard spoke about the social value that small venues bring to the music industry, as well as the cultural and economic benefits.

'Young people are disenfranchised enough in this country. These venues are somewhere people can go and meet like-minded people and exchange ideas, form bands, put on gigs of their own,' he said.

J. Willgoose, Esq. of Public Service Broadcasting said that he hoped the Agent of Change, if applied, would re-introduce, 'a bit of pragmatism and a more sensible approach to planning development.'

He said: 'It’s absolutely ludicrous that something like the Boileroom in Guildford can be on the verge of being closed down – having been an established business for so long – just because somebody moves in two doors down and starts complaining.

'It’s a farcical situation, so hopefully if we can get this legislation in place, we can protect venues better and we can protect the UK’s cultural scene.'

The campaign to get the Agent of Change principle enshrined in law to protect venues is spearheaded by UK Music and has the backing of at least 75 MPs and peers, plus organisations including the Music Venue Trust and the Musicians’ Union.

To pledge your support, you can write to your local MP and ask them to get behind Speller's Agent of Change bill.