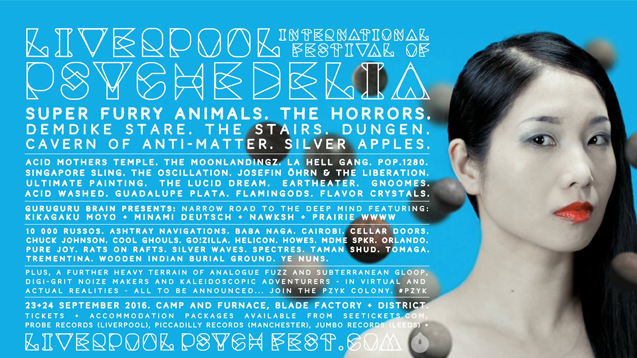 Super Furry Animals and the Horrors have been named as headliners for the Liverpool International Festival of Psychedelia.

Super Furry Animals and the Horrors have been named as headliners for the Liverpool International Festival of Psychedelia.

Taking place 23-24 September at the Camp and Furnace, Blade Factory and District, in Liverpool’s Baltic Triangle, the event will see the great and the good of the experimental music world heading to the North West.

Toyko-based label Guruguru Brain will present Narrow Road To the Deep Mind, a curation of the best psyche sounds from the Asian underground scene.

Other highlights include the Moonlandingz, the latest venture from the Fat White Family and the Eccentronic Research Council.

More acts are expected to be announced in the coming weeks.

Read our past review of the event and check out a Spotify playlist from the festival promoters.

liverpoolpsychfest.com
News
Back to top