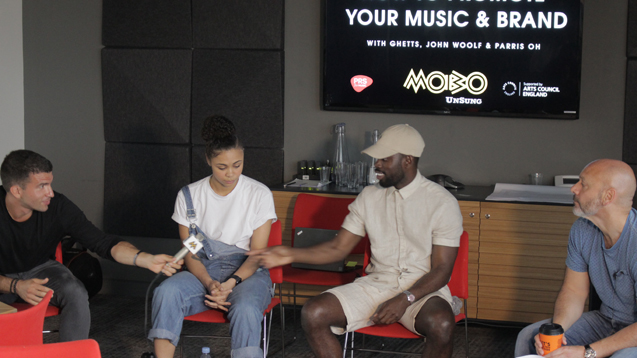 14 ways to promote your music and brand

Promoting yourself and your music is one of the biggest challenges for new artists in 2016.

With the web offering ever more tools to use, there are now more opportunities for acts to make themselves heard. But with more communication channels, there also comes increasing competition meaning it can be even more difficult to stand out in a crowded market place.

We were on hand at seminar at PRS for Music’s Streatham offices organised by the MOBO Unsung team to learn more about the challenges and the opportunities from a panel of urban music experts. Wiley's manager John Woolf (JW), grime MC Ghetts (G) and Sony Music’s Urban Development manager Parris Oh (PO) gave us their words of wisdom on how to stand out and make the right kind of noise in 2016…

PO - Promotion is not all about social media. It’s a big tool but it’s not the only form of promotion. You need to be in conversation with PRs, booking agents, potential managers …

JW - It’s about building relationships. You’ve got a song which you think is great? Then send it to this blog, plugger or manager. You need to go and meet people and make those relationships and connections.

But it is an important part of it

PO - Social media can be key in 2016 as it helps you get across your personal brand and removes the smokescreen between you and the audience.

In 2016, there’s not a better time to be unapologetically yourself. It allows that interaction with your audience whether you want to be a brand like Kanye - tweet about something topical - or Stormzy - talk about shows and being thankful for the music.

Use social media to have a two-way conversation

G - I post a tune just to look at the analytics of it all. I can post it and it might start going off with people asking to release it now. Other times, one might need more of a push. You can see the difference in how people react with each one.

JW - If fans are engaged with you on social media, then these opinions do matter. These are the people who will buy a ticket or a record.

Remember to be DIY from the start

JW - As a manager it’s not my job to paint a picture. It’s my job to frame and sell it. I want to work with someone who is proactive and got it to a certain stage. Then I can come in and say ‘I know what this needs and how to accelerate it’.

It’s a lot better when someone has the same drive as you. You want someone in it with you together. They share the same vision with you and you’re working towards this shared goal.

Take advantage of the many online opportunities

JW - Many platforms online are available - SoundCloud, YouTube - you don’t need anyone to build it for. Nine times out of ten you can do it yourself. If you want to put a song online today, then people can hear you and start developing your own thing. You don’t need a label to put music out. Don’t ask for approval. Just do it yourself.

G - You can’t just employ anyone. You need someone who is as passionate about the music as the artist.

G - I don’t like going too long without speaking to anyone I’m working with. Things get lost in translation. I like picking up the phone and speaking with people. Have meetings with everyone and set goals ‘I’d like to be here by  next year’.

Be authentic and consistent

PO - The two most important things for any artist or brand is authenticity and consistency. That’s it. That’s what I want to hear from artists. It has to feel authentic. And you and the team around can help you achieve this.

Do this across all channels

PO - Think past the traditional media outlets - social media, visuals, mixtapes - there are different ways of telling your story and communicating.

Not every promotional approach works for every artist

So we don’t sit around waiting for anyone to do stuff for us. I forget how many record deals we’ve done. We had this song Take That. I played it to loads of labels who in the morning weren’t interested. Then in the evening we were like 'fuck this' and gave it to Zane Lowe. He made it the hottest record of the week and then every label was interested. If we’d sat around doing nothing, then nothing would have happened.

It’s still all about the songs

JW - Remember it’s all music driven. It’s all about the songs. If you’ve got the right songs, then you’ll be good. If you have the right tune, it doesn’t matter if it’s folk music or grime, then it will connect. Everything should start there - then things will happen.

G - As I’ve grown, I realise no one owes me nothing. So I’m not going to turn my back on an opportunity because someone didn’t understand what was there before. Bad energies don’t work for success. I wake up in the morning, thank the lord and make another banger.

Be persistent - but don’t be annoying

JW - I love persistence. I’m a persistent person myself so I can relate. However, there might come a point where I might just shut it down. I’d say don’t persevere with me but go and talk to this human as it might be for them.

PO - I’ll never pay attention to tweets with links to their mixtapes. Email is fine as you’ve got that from somewhere. But on Twitter, I’ll be checking your last 50 tweets to see if you've been messaging people, pestering them to listen to your music. That’s not promotion, that’s annoying.

JW - How does a new act break through on these platforms and get on these playlists? It’s about becoming friends with those who curate the playlists on Spotify. And you need to get into that world. That’s the future. Streaming is where life is going to be next. That’s where the world is going.

Check out our recent No Hats, No Hoods feature on the health of UK grime in 2016.
How to