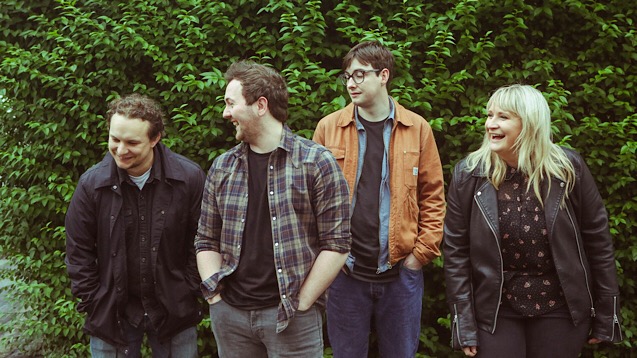 Glaswegian newcomers Yakima may have only unveiled one track to the world so far, but it's a shimmering, melodic slice of shoegaze that will leave you wanting more. Tune in to their playlist here...

Glaswegian newcomers Yakima may have only unveiled one track to the world so far, but it's a shimmering, melodic slice of shoegaze that will leave you wanting more.

Formed in 2013 by professional salsa dancers Neil McArthur and John Houston (fun fact or press release high jinks? Answers on a postcard please), we can only assume that the pair were waylaid with the mambo in the years that followed.

Thankfully, along with band members Kay McLaren and Paul Bradley, the four-piece found time in November 2017 to record their debut EP and are now spinning their fuzzy, warm magic on a debut album.

First single Judy's Lament was produced by Benji Compston and Jon EE Allan of Happyness, and is a gorgeous introduction to their sound which follows in the hazy, lush vein of Slowdive, Mazzy Star and Pavement.

With their follow-up single due on 26 October and a UK tour promised this autumn, we caught up with the band to find out what they can't stop listening to at the moment. Scroll to the bottom to tune in...

I Just Wasn't Made For These Times - The Beach Boys
I love The Beach Boys and this is definitely my favourite song of theirs. The lyrics and the instrumentation are awesome. I listen to this song at least three times a week. (Neil)

Knives of Summertime - Sparklehorse
It's difficult for me to choose a Sparklehorse song, as I love them all equally, but this is the song I've been listening to the most the past month or so. I especially love the guitar lead on this one. (Neil)

Jesus, etc - Wilco
I could've chosen any song from 'Yankee Hotel Foxtrot' because they're all exceptional. This is a song I wish I'd written - it's so understated and cool. (John)

I Wanna Prove to You - The Lemon Twigs
This is one of my favourite songs to listen to just now. It's got amazing harmonies and a cool sixties vibe about it. (Kay)

Seven Wonders - Fleetwood Mac
Seven Wonders' is a song I can't help singing along to. In fact, that whole album is genius! (Kay)

When I Go Deaf - Low
Listening to this recently due to the harmonies, but when the guitar kicks in after the two minute mark, the track goes from gentle to chaotic with what sounds like speakers being blown out of an amp. (Paul)

Pristine - Snail Mail
I have had this album on repeat fairly regularly through the summer and this song stands out to me as just being a good example of a melodic song that's easy to get hooked on. (Paul)

Victor Lazarro's Heart - Happyness
Happyness are a huge influence on us as writers and musicians. This song has some sparse melodic guitars along with some beautiful vocals which can only make you smile. The drums also add to the relaxed vibe, resulting in one of the greatest songs of recent years. Working in the studio with Benji and Jonny has been a real highlight for us! (Band pick)