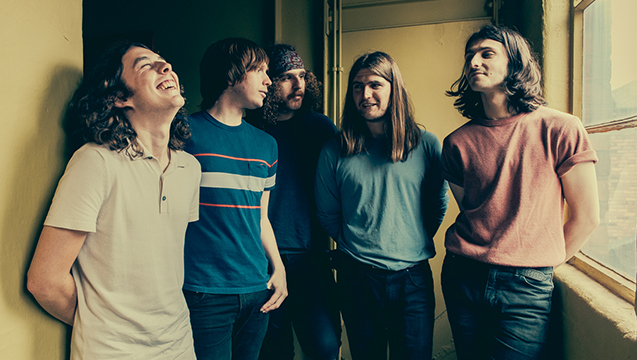 Liverpudlian psych-pop pioneers The Vryll Society curate our playlist with the sounds that inspired their latest ethereal masterpiece, their debut album.

Liverpudlian psych-pop pioneers The Vryll Society are a band who play the long game and play it well indeed.

In 2015 they released their debut single Deep Blue Skies, an expansive space-rock intoxicant that announced their dream-like offerings to the world in a trippy, hypnotic statement piece.

They spent the consequent years smashing Glasto sets and SXSW showcases, generating a respectable amount of buzz as one of the most electric live acts on the UK indie scene.

The Vryll Society kept the fans hanging though, a string of singles followed to similar acclaim, further exploring the band's kaleidoscopic take on indie rock, but a full LP always felt like some far-off dream.

Until today, of course.

Today marks the release of the band’s debut album, Course of the Satellite, an enigmatic release that builds on the band's blissfully spacey, reverb-soaked endeavours and delivers on the hype, proving unequivocally that slow and steady does indeed win the race.

We caught up with the quintet to find out which artists, songs and post-apocalyptic nightmare scenarios inspired them in crafting their latest ethereal masterpiece.

Neu - Hallogallo
This is a song that inspired us to include some Krautrock vibes within our song writing which you can hear all over the album. We really like the drum sound and the continuous bass through the song.

Post Nuclear Disco
When we were creating ‘Inner Life’ we created a little scenario in which basically we pictured that there had been some k ind of nuclear disaster and there were a few people left, coming out of hiding. The scene leads to the people eventually escaping the area and making it to the safety of some kind of rocket ship waiting to take them away, all the while whilst being chased by nuclear zombies.

Air
We have always loved ‘Air’ the French band, they have always been one of our influences and probably always will be in some way. You can hear hints of it in the album.

Radiohead – House of Cards
Definitely influenced the guitar playing in the song Give Into Me - the beautifully haunting sound of that song (house of cards), the space and the reverb was a big influence when writing that song.

The Common People – Those Who Love
This fits in with our Axelrod influence, I believe he arranged the strings on this song which was something we always had in mind when we started to record, that sombre atmosphere with beautiful uplifting strings go well everywhere.

David Axelrod – Holy Thursday
We take inspiration from Axelrod, especially in terms of drums and bass - not only from how they sound but the rhythms and movements. The guitar sound on Holy Thursday we love and wanted to make our own for the album. The guitar cuts through so well on this record and we wanted that on ours, as when the music in our tracks is kind of floating and grooving along, the guitar needs to stand out. This sound is perfect for it and works a treat, sharp and crisp.

Tame impala
We’ve always been into Tame Impala from the get-go. Our synth sounds amongst other things are heavily inspired by Tame Impala also drums sounds and techniques.

DJ Shadow - Midnight In A Perfect World
We love Trip Hop, you can really hear it on a track like Soft Glue. It's something we'd like to push again on the second album and who better to try and take notes from than the shadow, arguably his best song and smoother than silk to listen to, serious track on a very fine album.

Nick Cave - Nobody's Baby Now
An unlikely influence but Give In To Me was originally very indebted to Nick Cave before it took it's transformation into outta space Brian Eno territory, Lyrically very similar to the eccentric Aussie genius and stripped down on an acoustic you can get that type of vibe that he goes for.

Vangelis
Some of the atmospherics and suspense which Vangelis used in Aphrodites Child and also the soundtrack for Blade Runner we have always loved so of course we are going to throw little bits of that in to our record.

{ ; } }
Listen to Course of the Satellite by The Vryll Society here.
Features