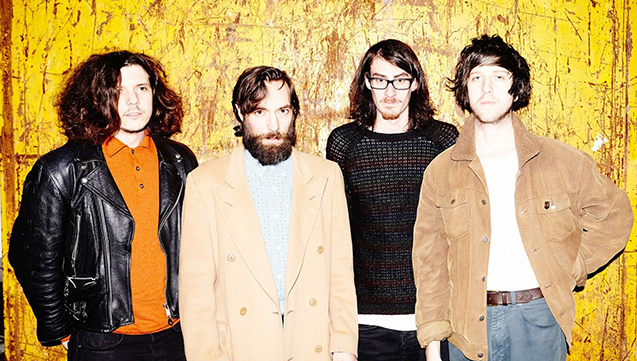 Tangerines are a Peckham-based quartet who count Hookworms’ MJ and Hooton Tennis Club among their pals and peers. They've taken over our weekly playlist slot, bringing all manner of mayhem with them...

Tangerines are a Peckham-based quartet who count Hookworms’ MJ and Hooton Tennis Club among their pals and peers.

They’ve only got a couple of tracks under their belt, but brand new psychobilly nugget You Look Like Something I Killed pretty much sums up what they’re all about.

With shades of Berlin-era Lou Reed, and their singer Gareth’s drawling rock ‘n’ roll repartee, they come across like a jaded Velvet Underground jamming with the master of arch, Willy Deville.

With their hotly-anticipated first live show of the year coming up at Servant Jazz Quarters, London, on 17 March, and a coveted slot on the Field Day line-up on 12 June, it looks like 2016 might be the year of the Tangerines.

Following the 30 seconds interview the lads did for us last week, here’s a playlist of their top tunes right now…

Swan Silvertones - If You Believe Your God is Dead, Try Mine
Dirty Gospel tune that hasn't been anywhere near heaven.

Charles Mingus - A Colloquial Dream
The best song ever about being starving and dead broke, but so in love with doing music that it drives your soul through any sort of hardship.

Whitney - Southern Nights (Allen Toussaint cover)
A great interpretation of one of the finest New Orleans classics.
[this one wasn’t on Spotify, but check out the YouTube vid below]

Father John Misty - The Night Josh Tillman Came To Our Apartment
And I mean like a goddamn marching band!

Eddie Noack - Beer Drinkin Blues
One of the greatest songs about drinking beer. Just listening to this track makes me feel drunk.

Julian Cope - They Were On Hard Drugs
Well, they must've been.

Armando Piazza - In the Station
Found this guy on a random cassette in a stranger’s apartment. Don't know much else about its origin other than he grew up in Naples.

Mighty Baby - Egyptian Tomb
So they all became Muslims and wrote some sick shit!