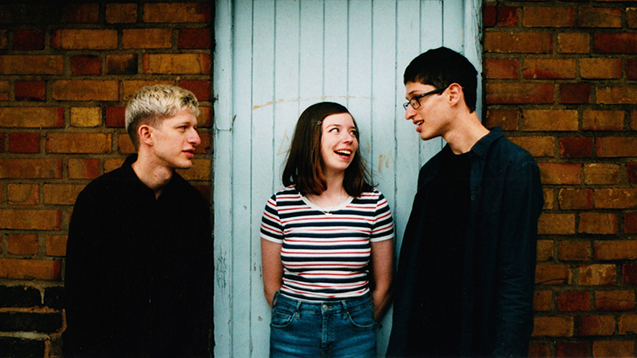 The indie-punk trio return with a new lease of life and fresh sound with the release of their second album, Everything But The Here And Now. Here, they compile an assortment of their favourite indie anthems and synth-driven pop...

Indie-punk trio Happy Accidents return with a new lease of life and fresh sound as they release their second album, Everything But The Here And Now.

The new record, out now via Alcopop! Records, sees drummer Phoebe taking on joint lead vocals for the first time and they admit that it, ‘sometimes feels like a new band’.

The upbeat triplet have explored different territories in this new chapter, including experimenting with synths, keys and atmospheric production thanks to Hookworms' Matthew ‘MJ’ Johnson.

They've also ventured down new lyrical avenues, focusing on their own turbulent yet upward journey as a three-piece.

With roaring support from Noisey, DIY and Kerrang! Magazine and airplay across BBC Radio 1 and BBC Radio 6 Music, the band are set for a big 2018, with an upcoming spring tour that's bound to be loads of fun.

Here, Phoebe, Rich and Neil compile an assortment of their favourite indie anthems and synth-driven pop, that clearly inspires their own sound.

In Undertow – Alvvays
This song is the first one on their new record and I just love Molly’s dreamy vocals. (Phoebe)

USA – Jeff Rosenstock
There's so many different sections to this song, but you don't even realise it's seven minutes long because it flows so well. (Neil)

Masterpiece – Big Thief
I discovered this band last year and can’t get over how great both their albums are. I’m obsessed with this track! I feel like I’ve been listening to it daily for months. (Phoebe)

Sportstar – (Sandy) Alex G
Rocket was one of my favourite albums of last year and this auto-tuned piano ballad may show you why. (Rich)

The Opener – Camp Cope
This song fires something up in me, I love the brutality of the lyrics and the empowerment I feel as a result. Check out the video of them playing at Sydney Opera House! (Phoebe)

Hi-Five – Angel Olsen
She's the coolest person in the world. 'Are you lonely too? Hi-five, so am I'. (Rich)

Keep In Touch – Spook School
One of my favourite songs from their new album. Although it's one of the more mellow songs compared to the big-chorus singles released so far, it still manages to be super catchy! (Neil)

Christine Perfect – Lemuria
This song's about being okay with being the second best member of Fleetwood Mac. It's perhaps the best song ever written on the subject. (Neil)

Solo – Frank Ocean
The first time I heard this song it was like an out of body experience, I can't quite explain how much it affected me, those chords man. (Rich)

Ghost – Neutral Milk Hotel
I'm throwing this in there because it recently had its 20 year anniversary and is one of best things ever made. (Rich)