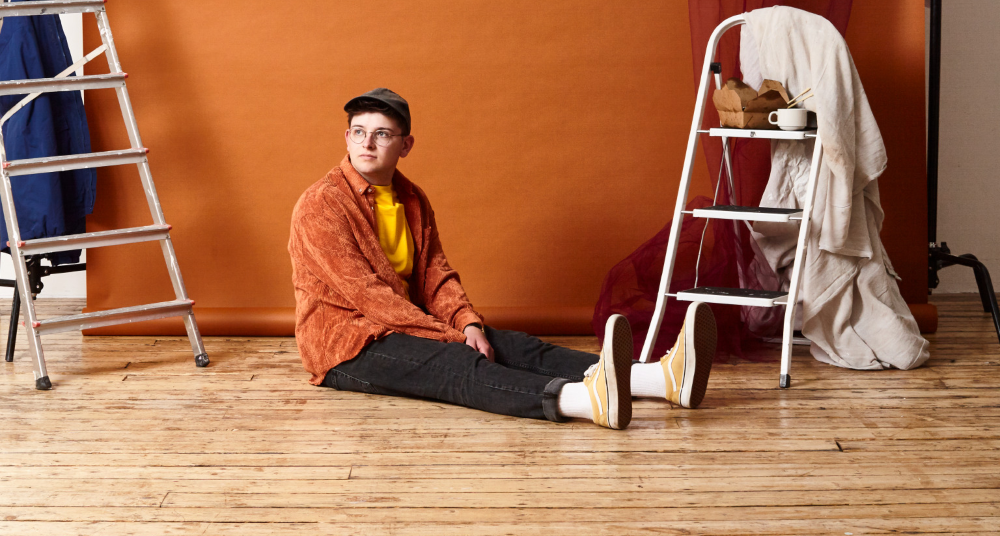 Following the release of his latest single Flowers, we asked bedroom pop visionary George Moir to make us a playlist. Tune in.

A creative visionary, George’s quirky world Moir was borne out of a unique upbringing, which included being one of eight home schooled siblings, raised by a collage artist mother and honey farmer father.

Flowers is his boldest and most ambitious release to date, with kitschy synths and vivid hip-hop beats it's a funky bedroom pop jam addressing the mistakes we make when it comes to love. You can watch the video below.

We asked George to make us a playlist.

I bumped into this track via Before the Data, and absolutely loved it. It’s a guy out of Norway called Marius, self produced, releasing songs independently. It’s a super creative track, full of up-close vocals, but really it’s all about the mental synth solo – very nice!

Tayo has been steadily putting out singles out since summer this year, this is the third release of his project. It’s some really fantastic left-field pop, he really knows how to get an absolute earworm of a chorus going and I’m really excited to hear more of his stuff.

This is a favourite of mine, the combination of vocal layering, a stupidly hooky topline, and Ama’s wonderfully unique voice always gets me excited about music. It’s one of those tracks that makes me want to go and try make something just as good – I just love it! It was released as part of an EP back in 2018, with a stunning 15 minute accompanying visual.

Suck a sick track, production by the legendary Steve Lacy with his instantly recognisable guitars, it’s a really great vibe. Ravyn’s vocals slot in so nicely, with some rich harmony stacks and a unique attention-grabbing hook. Plenty to enjoy.

I love the way Dan structures and produces his songs; clean, precise, natural. I found this song on my friend Pat Pearson’s demo reel – he wrote the song with Dan, and I’m so pleased I got to hear it! It’s a really special song, and I have it on in my living room quite a lot.

Sfven is a really talented musician, songwriter and producer. He put out another version of this song along with his EP Honey, but soon after released this alternate version. I love the intimate, bedroomy feel to it, the crinkly vocal texture, and the stripped out production – it creates so much room for the words to land, and adds a lot of weight to what is already a very touching song.

This was a single from Willie’s latest album Twin Heavy, and was one of the first introductions I had to his music. The pallet of sounds is brilliant, it’s guitar music done very very well (also, I’m in love with the percussion and drum tone). The music video to accompany it is great as well, worth checking out!

KIRBY – Loved by you

I was introduced to this song by a good friend. It feels like a classic record, and the vocal performance is absolutely pristine. I always get so lost in the song, I think it’s so impressive how she’s done so much with just a single guitar and her voice.

I’ve had this song on rotation for a fair few years now. It’s really sweet and soft, with some delicately crafted chords and structure – it never gets old for me; endless replay value. The more you listen the more there is to pick up on.

Nina Simone – My Baby Just Cares For Me

I grew up with this song playing in the kitchen, and brings back some lovely childhood memories for me. A beautiful voice that I come back to every now and then. A really fun and light-hearted track, you should definitely dig a little deeper into her catalogue though if you haven’t already – some real gems in there.