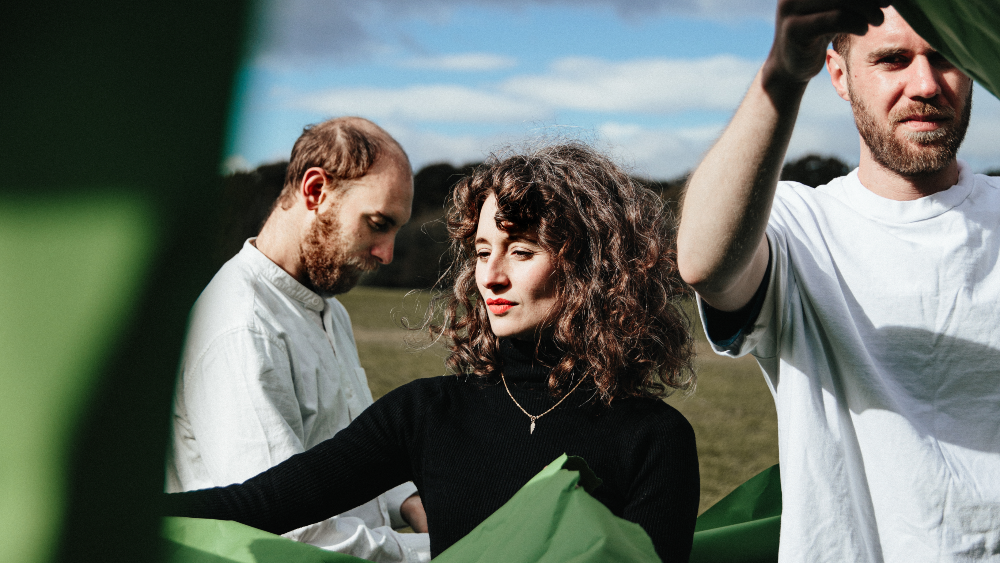 As anticipation builds for the Bristol-based Elder Island’s sophomore LP, Swimming Static, we asked the band to make us a playlist of album influences.

Carving out a genre-defying space for themselves in our musical landscape, Elder Island captivate with shapeshifting songs. The trio’s sound cherry-picks and transforms elements from genres as diverse as electronica, indie, pop and neo-soul. The result is a web of sound that threads poetic lyricism and unfamiliar instruments over a backdrop of electronic elements and synth-heavy dance beats.

With the release of their long-awaited sophomore LP just one week away, we asked Elder Island to make us a playlist of tracks that influenced the album.

You can pre-order Swimming Static here, and give Sacred, the latest single lifted from the record, a spin below.

Kate Bush - Pull Out The Pin

Katy: At the start of writing this album I bought a book called How To Be Invisible, it was a collection of lyrics by Kate Bush. This, paired with another book of collective poetry called 52 Ways Of Looking At A Poem by Ruth Padel, had a huge influence on the lyrics written for this album. I've always been a huge fan of Kate Bush, the tracks have held me spellbound since childhood. There’s an other-worldliness to them that both disorientates and stimulates. For Swimming Static we wanted to replicate this feeling of being transported somewhere else by songs. Picking a specific track was tough, but I know I listened to Pull Out the Pin a great many times over the writing and production period. You can hear its impact throughout but especially in some of the darker tracks, Embers, Cannonball. The use of vocal effects, her style and the backing vocals are incredible on this track. The vocal harmonizer thickening the lead vocal somehow fills and creates space. The gloriously low, undulating backing vocals that sound as if they’ve just dragged themselves out of a swamp. I love the ethos you can hear toward a playful and creative production process, thinking outside normal studio lines of ‘what makes it sound good’, it is more intuitive to the track itself. Obvious things like the helicopter blade sample in this track, but also things like recording the bass with the ‘tak’ and rattle of the strings emphasised, it gives it bite. These aspects give the tracks a special edge.

Katy: I must listen to this track on a weekly basis. There's something about the loose darkness, a swimmy disregard for rigidity, everything kicks out and lolls about.  It’s a song that feels like you're travelling somewhere but it doesn't matter if you get there or not, it's all about the travelling. - I love the grit mixed with the lofty clear high feedback that accumulates and hangs suspended in the track. It was one I pulled up for Cannonball - a request to Dave for crunchy guitars when we were trying to inject a darker atmosphere into the song.

Katy: I remember lying in the garden outside the studio whilst listening to a few tracks on this album, we were struggling to finalise the direction of a few album tracks. ‘Rewind’ started with the seemingly disorganised percussion, the sparse flumps of the kick, all feeling like it was hardly held together but for the calm and engaging vocals of Amelia Meath. Then this big synth paired with a repetitive vocal scoops you up with this wonderfully rhythmic chug and your off. Afterward it suddenly drops you, empties out again but somehow doesn't fall flat. Sylvan Esso has this down, creating exciting start-stop dynamics. Creating space and simplicity in the production so that everything present has a richness. It's something we struggle with as we’re always trying to squeeze so much in. ‘Rewind’ to me, said “make it however you want”.

Dave: Was listening to a lot of Fleetwood Mac in the leadup to making the album. Especially Rumors. I picked The Chain as it's such a well crafted song that I found myself listening to it a lot when making our track Feral. Lusting after the guitar tones, led me into a deep dive of some of the equipment used by the band, especially the Peter Green days and the Matamp!

Dave: This track is an absolute groove. The whole album Moon Safari was a massive point of inspiration for their electronic / live crossover production approach.

Dave: Such a simple progression but so well executed. We sat at the piano a lot more on this album, fleshing out the core elements and ideas of the initial sessions and this song was a big source of inspiration for keeping things simple.

Dave: From the album Childqueen this was my standout track. Love it. Kadjha Bonet’s production approach sounds so unique, lots of inspirational moments for me from this album.

Grace Jones - Pull Up To The Bumper Baby

Dave: This track came up when we were making Purely Educational. We worked with Ali Chant quite heavily on this one to glue it together as it was a much poppier track than anything we’d written previously. Lots of '80s techniques and equipment came out for this like the Neve RMX16 and Yamaha DX7.

Luke: When creating Intertwine I think from the beginning Katy and I knew that it had a slightly FKA Twigs vibe to it. I have always loved the way that Arca has produced these early tracks, especially their drum work and effects so I thought it would be nice to infuse a little bit of that into the song.

Luke: This track from Bicep has a unique sonic landscape to it which I think they captured perfectly in their music video for this song. It's got a heavy dance intention whilst also being very ethereal and spacious, something that I think we as a band have achieved quite often on this album. Also there is a sound in Cannonball that reminds me of the main synth that is used in this track. It's gripping and demands attention.