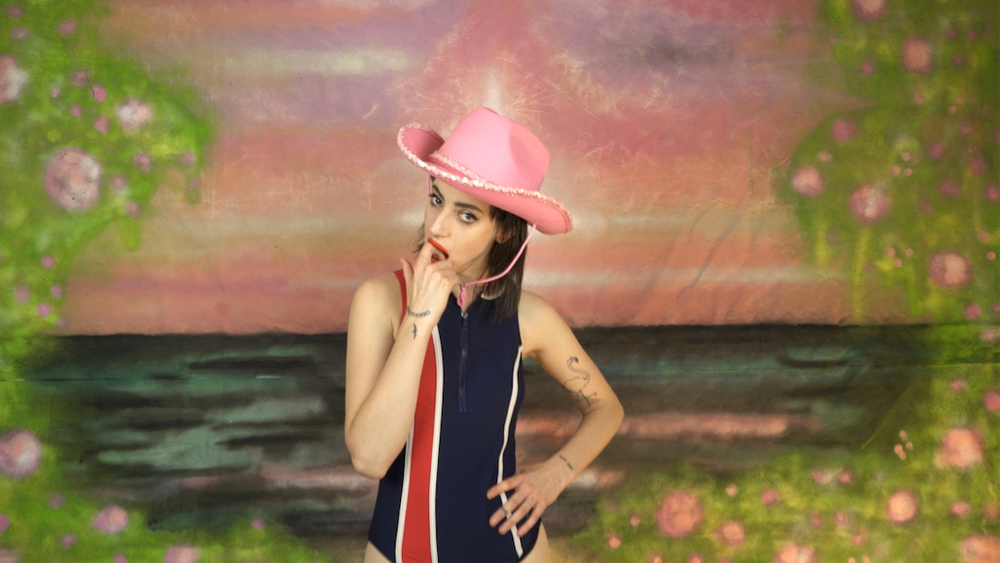 Ahead of her new album, Lung Bread For Daddy, Du Blonde has curated a playlist of tracks she currently has on repeat…

‘My lyrics are always
autobiographical. I have to be able identify with what I’m singing, and telling
my story is therapeutic,’ says Du Blonde, aka Beth Jeans Houghton.

Beth is set to return with her follow-up to her first record
under the Du Blonde moniker, 2015’s Back
to Milk, and it is a defiantly personal affair

The multi-disciplinary musician, composer, artist, and
animator’s latest charts time spent in LA, unhealthy relationships, and mental
health with a liberal approach to genre, which sees the record touch on psych-rock,
proto-punk, and seventies songwriters for inspiration.

The album is set for release on 22 February, but for now Beth has curated a playlist of tracks she currently has on repeat…

Frankie Cosmos – Embody
I can't remember how I came across Greta's record Next Thing but it's my go-to album every time I can't decide what to listen to. It makes me feel the way I did when MP3s weren't a thing and I'd listen to records on my CD Walkman on my way to school.

Music quite often doesn't mention specific people, which is
great in making a song universally relatable, but when you get a song that
mentions real names and real moments in time specific to the writer it's like a
photograph of a mundane moment in time and there's a real magic to that.

Surfbort – Selfie
I only discovered this band recently, but they've already become a staple in my day to day listening.

I love all of their new record Friendship Music, but I chose this song because it's a really interesting break amongst the more high-powered punk of the rest of the album. Often my favourite songs on records are the simpler slower ones that show an extra pace and personality to a band.

Billy Joel – Longest Time
Billy Joel is one of my favourite songwriters in terms of the type of structure and story telling you get from artists like Elton John, Bruce Springsteen and Ezra Furman.

I've always been totally excited by songs that follow a
formulaic musical pattern and then throw in a random unexpected note that makes
you go 'whhhaaaAAAT,' and this song has that. When he gets to the word
'excited' and it goes kind of atonal, my brain and heart do a flip and I hit
repeat.

Roches – Nurds
A joyous anthem for the freaks and nerds of the world. The Roches have such a specific way of getting their mouths around words, creating some bizarre and brilliant pronunciations.

I used to listen to this song in high school and be like
'yeah! My legs are hairy too!' and feel like if these grown sisters from New
York are so rad in their weirdness then I could be too.

Eric Burdon & The Animals – Good Times
I love and hate this song in equal measure. Love it because it's so simple in the way most great songs are, and hate it because I can't get it out of my head for two weeks after listening.

The brilliance of the line 'When I think of all the good
times that I've wasted having good times' is reason enough to go back to it.

Ezra Furman – Psalm 151
This song is so perfect I feel like it's been waiting in the ether since the dawn of time for Ezra to be born and give it a voice.

Betsy – Waiting
When I first heard this song, it gave me such a sense of euphoria that I listened to it on repeat for eight hours. Around a month later I went to one of her shows and my jaw was on the floor the whole time because of the quality, tone and power of her voice. She writes total exultant hits, and this is a real example of that.

Friend & Lover – Reach Out of the Darkness
This song has a similar vibe to Aquarius / Let the Sunshine In by the 5th Dimension – total 60's vibes with a jolting shift between the groove of the verses and the jubilant chorus. From the good old days when writing about people getting along was seen as empowering.

Vetiver – Aboretum
This song has the ability to take me to a place in my mind where I'm in the car with Andy Cabic and his buddy and the sun is shining, and I can see everything they see.

Like Embody by Frankie cosmos, Aboretum has a way of transporting you to a specific place in time and giving you the benefit of feeling the way he felt, which can be a fantastic tool for a listener who may be far from that in their current life.

The Mamas & The Papas – Frustration (Instrumental)
I listen to a lot of instrumental music, so it would be a shame not to include some in this list.

This track may be an instrumental version of a song with
lyrics, but it stands its ground as an instrumental track due to the attention
to detail The Mamas & The Papas always included in their compositions.

I'm always in awe of how instrumental music can tell an emotional story in lieu of language and this is a great track for walking and thinking when you need a bit of positivity in your life.