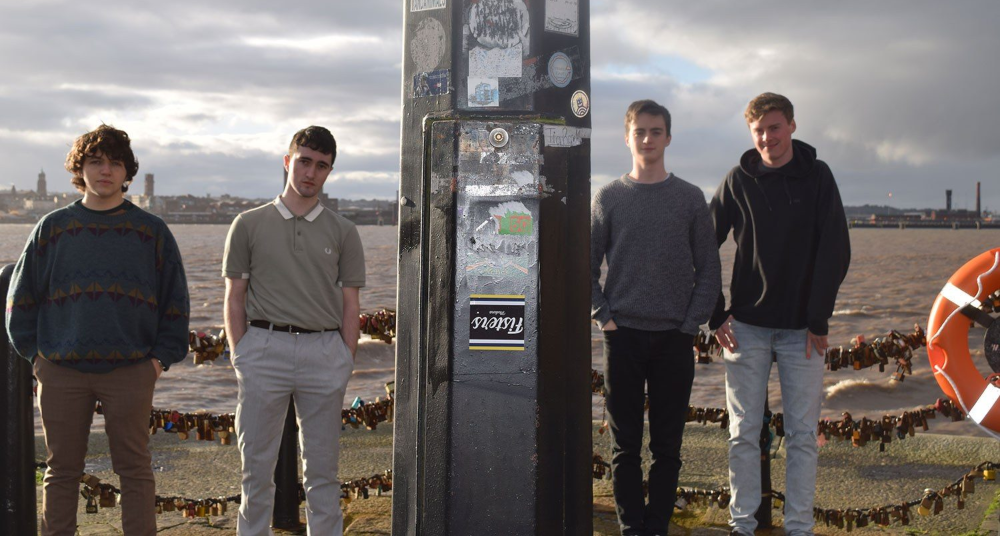 Liverpool four-piece Courting are part of a new wave of bands spearheading the Britpop revival.

Finalists in Glastonbury’s Emerging Talent competition 2020, the quartet draw influence from the likes of Parquet Courts, Pavement and LCD Soundsystem whilst maintaining a very British identity.

Their energetic new offering, David Byrne's Badside, released back in May to critical acclaim, sees the band taking the mick out of modern-day Britain with razor-sharp wit.

Speaking on the single, lead singer and guitarist Sean says: ‘David Byrne’s Badside has nothing to do with the Talking Heads frontman. It’s about class tourism and the casual racism that exists in Britain today. It’s a portrait of the type of person who votes UKIP and wants to close our borders yet promises they’re not a racist. The type of person who says to buy British yet owns a Porsche. At the same time, we’re referencing and poking fun at more lighthearted aspects of British culture, like the collective rage when somebody takes the low offer on The Chase, and Twitter spats about Blur and Oasis. We also really just wanted an excuse to have a saxophone solo.'

We asked Courting to make us a playlist. Tune in.

I shaved my head at the start of this lockdown and this song resonated with me a lot. I don’t really understand much what the song is about after he stops talking about Yul Brynner but I quite like that. The ending is really cool too and reminds me of a Ty Segall song I love called Bees.

This song is just so so good. Especially on the turnaround around halfway in when the groove just amplifies by like 100x. This whole record is fantastic, the concept, the art direction and everything about it.

I don’t have much to say apart from the fact that this song just hits a really sweet spot. I love the lyrics and Deerhunter has a way with really nice melodies.

As of right now, this is my favourite song. It is SO good. The string sample is so sweet layered with the darker band groove in the background. The vocals and lyrics are so powerful and the phrase 'Safe in the hands of love' just sounds really pretty to me. The lyrics are very apt with the times we are in. The way the song slowly twists at the end with all the screaming and what sounds like sirens is incredible.

This song really confused me at first, but once I got it I couldn’t stop listening to it. The production is insane and the structure just seems to do whatever it wants. The vocal modulation is so fucked up in a good way and when what sounds like the sampled flute comes in it just goes off. Never have I heard something go so hard with a flute.

The fact she could write this during lockdown is really unfair to other creatives. Flawless pop song and the melody is so pretty and catchy. The production is fantastic too and just weird enough to keep it really interesting and experimental. Maybe a good song to have a happy cry to.

One of my favourite LCD Soundsystem songs. Never has a music history lesson been so catchy. I love lyrics that are very referential and even self referential to the point where James Murphy even admits that the people who are his competition are better looking and have better ideas. The ending is just fantastic and I don’t think anyone could pull off listing their inspirations in a song to this extent.

I remember thinking this was really bad but now I genuinely think this is one of the best albums I’ve ever heard. It is rare that I have so much fun listening to an album and without doubt this is the best ska/emo/trap song about horse racing and Gambling. Does alarmingly sound a little bit similar to the What's New Scooby Doo theme song.

Everything from post-punk to panto. This song is really fun.

Before lockdown started, we went down to London and we had a bit of time to kill so we went and found Bar Italia and it was really lovely. It was pissing it down and we just had a moment to relax and enjoy a cup of tea. Always thought this was such a brilliant song and i'm a sucker for a good album closer, and personally I couldn’t think of a song that could end Different Class in a better way.