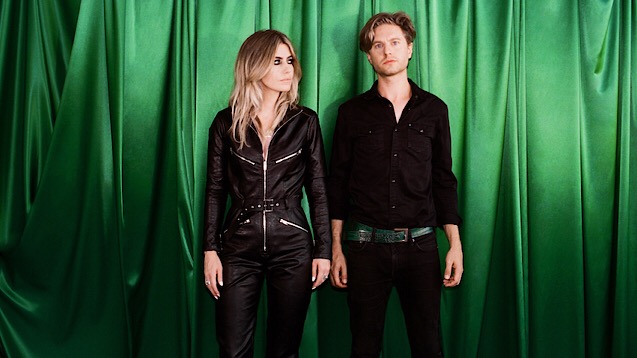 Brighton rock 'n' roll duo Blood Red Shoes are back with a bang with their new album, Get Tragic. Here, Mary curates a sizzling playlist of the tunes she has on repeat now.

Four years after their last offering, Brighton rock 'n' roll duo Blood Red Shoes are back with a bang with their new album, Get Tragic.

The long-awaited record is the result of plenty of soul-searching for the pair. A short-lived break saw vocalist and guitarist Laura Mary-Carter buy a one-way flight to Los Angeles, where she fell into songwriting with big-time pop producers, while estranged bandmate Steven Ansel spent the rest of the year... well, partying.

'That’s the whole running theme of this record,' says Steven. 'The reason we called it Get Tragic is because we realised that everything we’ve been doing over the last three years is kinda tragic!'

Regrouping and turning their situation around, the pair decamped to LA to record with Nick Launay (Yeah Yeah Yeahs / Arcade Fire / Nick Cave and the Bad Seeds), turning out a more melodic and synth-led sound that signals a new musical awakening for Blood Red Shoes.

'We wanted to have the soul of a rock band, but change the style so it was more interesting, more groovy, and more sexy – and less like everybody else! I started to feel like all rock music around us was one shade of one colour,' Steven explains.

The album is set for release on 25 January 2019, alongside a run of UK tour dates. For now, whet your appetite with stomping new single, Mexican Dress and tuck into Mary's playlist below, featuring the tracks she has on repeat now...

Idles - Samaritans
This band have captured a feeling that I don’t think many have recently. This song really gets me every time I hear it. Smart, ferocious and real.

Big Thief - Shark Smile
I was introduced to this band by a friend who said, 'Laura you will love this' and he was right! We just played in San Francisco and I ran over to see their show straight after we played, they were great live too.

Parquet Courts - Human Performance
I was late to the party with this band, so really just discovering their back catalogue now. This is a song that sticks out for me, I am a lyric person and I love the lyrics to this.

LUMP - Late To The Flight
This song is so beautiful, I almost cry every time I hear it. It’s a song I wish I had written. It reminds me of this band called The Microphones who were sorta an underground band from the US and were an influence on our band.

Hotsnakes - Six Wave Hold-Down
One of my favourite bands of all time, this song is off their latest album and is my favourite on the record. I could just listen on repeat for days on end... which is pretty much what I do.

NIN - Every Day Is Exactly The Same
I saw NIN recently in London and it just blew me away. I love this song, I listen to it on the tube. It helps me meditate.

Ed Harcourt - Duet For Ghosts
Ed Harcourt features on our album singing and also produced my solo EP which I have yet to release. He is one of the most talented people I have ever met. This is an instrumental song and his most recent release from a new album, which as far as I know, is just piano. I am excited to hear it all, as this song is stunning.

Miss World - Diet Coke Head
Miss World is the other half of Shit Girlfriend, my other band. This song is one of my faves off her new album, she is witty and clever and you need to really immerse yourself into her world to get it. I love how fearless she is.

Haley Heynderickx - Drinking Song
I am an Elliot Smith obsessive and this really reminds me of something he might write.

Bodega - How Did This Happen?
This is a new band on my radar, I love their style... It’s like the hipster B52s or something haha.