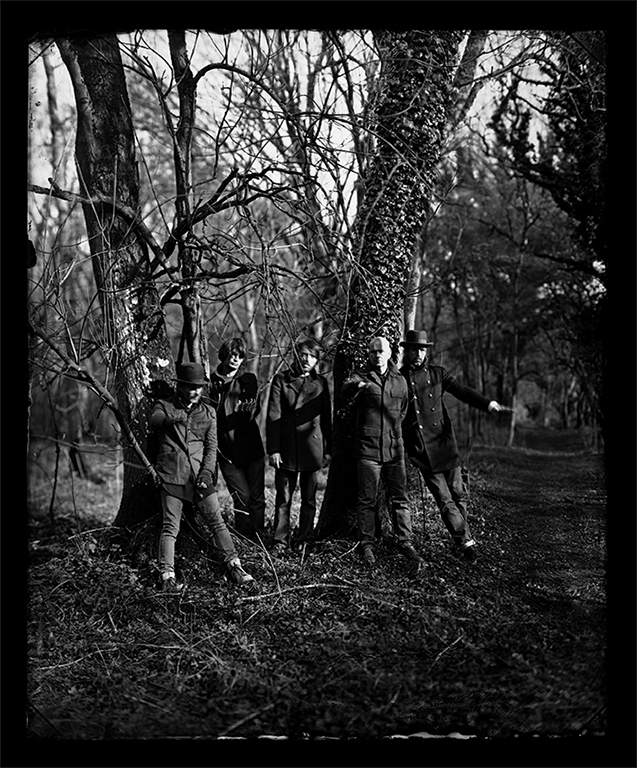 The Story Behind An Iconic Radiohead Shot

Music photographer Sebastian Edge shares his story behind this 2011 Radiohead press pic before it goes on public display later this month.

Music photographer Sebastian Edge, founder of the North London Darkroom, shares his story behind this iconic 2011 Radiohead press shot. To take the picture, he used an antiquated photographic technique that perfectly fitted the band’s aesthetic for their top 10 album The King of Limbs.

This picture was taken using the 19th century Wet Collodion photographic process, which I learned back in 2007. The image was shot using my hand built Hurricane camera. It’s named after the great storm of 1987 because it’s made from fallen chestnut wood my dad collected shortly after.

When I’d mastered the technique my filmmaker friend and I hit the road together. We went to End of the Road Festival, All Tomorrow’s Parties and a few others. My camera is huge and it always attracts interest, so I met a lot of people around then, including a bloke who was working with Radiohead. I didn’t think anything of it until I got a phone call out of the blue in January 2011.

The band were looking for a photography process that fitted both their outlook and their new album, The King of Limbs. A few weeks later I found myself at their studio in Oxford. It’s a barn conversion with all of their recording gear, Johnny and Colin’s guitar collection - everything is in there. As I walked in the door, their manager said: ‘Uh, I’ve just pressed the button, the album is out! All we need now are the press photos…’

We disappeared round the corner to a little patch of woodland near where Thom lives. The location was perfect for Radiohead and for me. I’ve always been fascinated by ancient English woodland and spent a lot of time photographing it. Radiohead’s album was about a thousand year old oak tree so I guess it’s partly why they wanted to work with me.

The Wet Collodion process is a lot of work to set up. I had to start the fermentation process with the chemicals three days before. But on the day, I focussed the camera, made the film on a side of glass, took the one shot, made the exposure and developed it straight away - so the band got to see something almost instantly.

The glass slide was in a big tray of liquid and as it started to appear in front of their eyes it was clear they just loved it. I don’t think they’d ever experienced anything like it before.

It looks like it was shot in the Wild West. They came dressed like that, I didn’t ask them. When we were experimenting with the pose, we walked around the woods for a long time looking for the right spot and the right light.

As I made the exposure, they had to stand really still for two minutes. I always tell people what might happen if they move, then just let them get on with it. With this shot, Thom, Johnny, Colin, Ed and Phil all did something. You might notice Colin moved his hand six or seven times. I don’t know why, but that’s the way he reacted to the shoot.

I’ve taken a lot of portraits, and some of them have got really beautiful stories, but I don’t think I’ve ever produced anything quite as special as this one.

Sebastian Edge’s Hurricane camera, plus exclusive shots of Radiohead, The Arthur Brothers, Mars Volta and others, will be on display at Metropolis Studios, London, from 13 October.
Features
Back to top