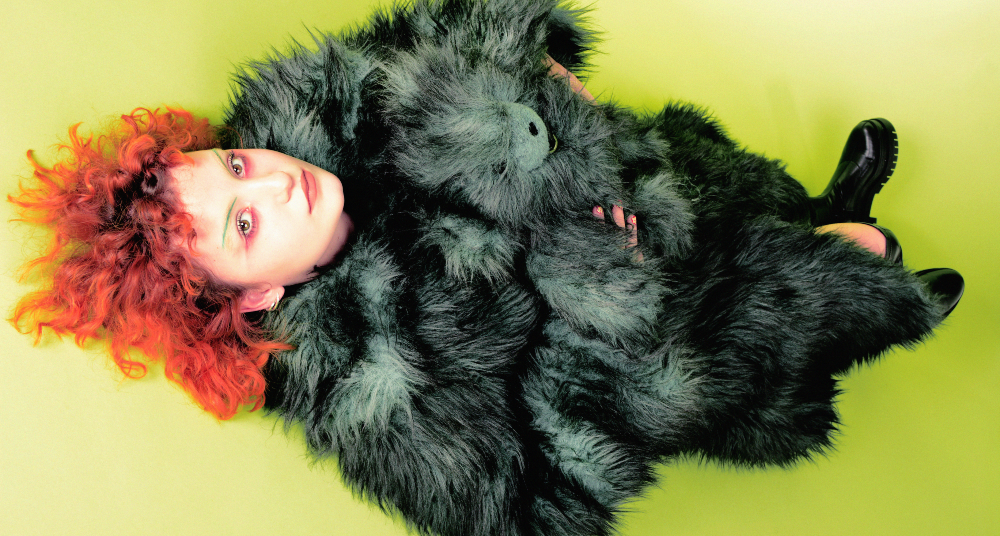 Phoebe Green: 'I really try to remind myself that I have so much to be grateful for.'

M Magazine speaks to Phoebe Green about her debut album Lucky Me, opening up about mental health and allowing yourself the space to grow.

Phoebe Green considers herself lucky. Her debut album, wryly titled Lucky Me, explores the mental burden that can come along with thinking yourself too fortunate to deserve to feel down.

The title is taken from a tattoo on her hand which says – of course – ‘lucky me’. It’s a physical symbol of the duality of her life, a reminder of good fortune as well as of the things that she has pushed through.

‘I really try to remind myself that I have so much to be grateful for. Even when I’m dealing with awful shit, circumstantially I am fine. I have an amazing family, I have a great job, I have the best friends. I’m in such a good place but mentally it’s so hard to connect to that sometimes because of all the shit that’s going on in my head,’ Phoebe says. ‘It’s very easy to be completely consumed by that. So I wanted a physical reminder that I am very lucky and things aren’t always awful.’

‘It’s also kind of a joke because like yeah, lucky me, but fucking hell I did not want to go through the shit I went through to get to this place,’ she adds.

She laughs a bit at that. The album itself is like this – two sides coming together and pushing apart, the gratitude and the hardship sitting cheek by jowl. There were a lot of emotions and experiences to sift through to get here.

'It’s a lot easier to be an observer.'

Like that quote about falling in love slowly and then all at once, Lucky Me was an exercise in both speed and stasis. Once things got going, the album took two or three months to write and record. But for months before that, Phoebe had writer’s block.

Part of the difficulty was that Lucky Me is far more personal than any of her previous work. Where Phoebe’s earlier EPs and singles tended to focus on the actions and behaviour of others, Lucky Me interrogates her relationship with herself and with trauma. And it’s not easy to rummage inside oneself for such a sustained period of time. Much easier to look away.

‘It’s a lot easier to be an observer,’ Phoebe says. ‘A lot of stuff came up for me in lockdown, when I had a lot of time with my own thoughts. That’s when I started feeling so much and I couldn’t really escape it. It was challenging only because the emotions that I was dealing with were challenging. I think I was trying to suppress a lot of stuff for a very long time, and once it came out that was it. I had to deal with it. And that’s what the album became.’

Things came unstuck when, during the midst of the pandemic, she met up with producer Dave McCracken for the day in Manchester. ‘This is when I was in the headspace of, “I can’t write anything because I can’t feel anything, and nothing has happened for me to be inspired by,”’ Phoebe says. ‘Dave said “Well, you definitely have been through enough to write about, it’s just whether you’re willing to dig deep enough for that.” We started talking, and that was the first time I’d been able to have a proper conversation with anyone in such a long time because I was in a period where I was just trying to get through every day.’

When you’re actually in the process of writing and recording something so deeply personal, the day-to-day graft of it can help shield you from the anxieties of its release into the world. There is too much to do – tracks to lay down and videos to film, release schedules and tours to organise. Album art, track listings, song titles. Then, inevitably, there’s nothing left to do but release it.

‘I’m terrified,’ Phoebe says. ‘I’m so scared, because I think it’s one thing to be vulnerable with yourself and the people around you, and another thing to let the world hear this stuff. I’m mostly scared of people criticising this album because it feels like people are literally criticising my experiences and my emotions. It's such a representation of me and what I've been through and how I'm dealing with it, that the way it sounds, and the music that brings it to life, is an extension of that. Whatever anyone says about it, I’m going to be like “oh no! oh god.”’

She laughs. None of these anxieties mean that she is not proud of the album, and she is ultimately happy with the result. And so far, it seems to resonate.

'I find it very hard to play that song with my eyes open, but I opened my eyes for a second and there was this girl in the front row that was just bawling her eyes out.'

Diediedie, a darkly honest track with dance overtones, has been particularly affecting. Phoebe carefully balances devastating lyrics against a pulsing kick drum beat and the low hum of a vocoder, a climbing synth riff lending a touch of lightness. Lyrically, the track deftly deals with PTSD and trauma, while also centring power and defiance. On the occasions she’s played it live, Phoebe has noticed Diediedie strike a chord.

‘I said very casually, “This song is about PTSD, I hope you enjoy it,” kind of joking about it,’ she says. ‘I find it very hard to play that song with my eyes open, but I opened my eyes for a second and there was this girl in the front row that was just bawling her eyes out. When I finished it, she said thank you.’

‘I literally finished that, went offstage and had a panic attack because I was like, oh my god, this is actually resonating,’ Phoebe laughs.

Those moments of seeing and being seen can be a mixed bag. Connection is important, but there can also be a pressure that comes along with it. ‘I really admire artists that talk about their mental health and things they’ve been through. Whenever I’m trying to keep it hidden because I don’t want it to affect how people view me that much, I think of how much it’s helped me to hear people be so open about it,’ Phoebe says.

It seems like Phoebe is embracing thinking differently on Lucky Me. One of the album’s standout tracks, Crying in the Club, is a Dancing On My Own-style banger built around the phrase ‘nothing changes if nothing changes’. It’s something Phoebe’s mum used to say, as well as generally being good advice. Lyrically, the track deals with internal progression being its own reward.

‘It's about doing all this work on yourself internally and expecting people to notice, and them not noticing, because it is so internal, and kind of trying to validate yourself and reassure yourself that it's paying off for you,’ says Phoebe. ‘It doesn't matter if people don’t notice how hard you're trying to grow as a person. Because you're doing it for yourself at the end of the day, it's not for everyone else.’

Looking at what she has achieved with Lucky Me, it is eminently clear that Phoebe Green is on the rise.