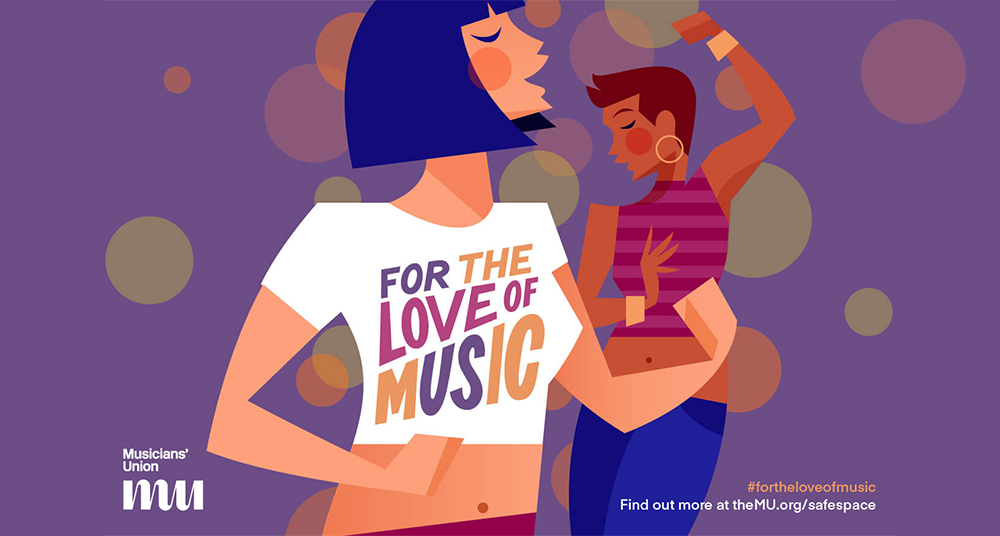 ‘It’s a massive problem with the whole culture of the industry,’ Naomi Pohl on Safe Space

The music industry is no different to any other in its issues with sexual abuse and harassment. Deputy general secretary for the Musician’s Union, Naomi Pohl, describes some of the stories shared at early Safe Space meetings as ‘horrendous.’ She remembers, ‘Some of them came in with boxes of tissues clearly ready to tell their stories.'

There is a strange discrepancy in the fact that the 'Me Too' movement has swept through other areas of the entertainment industry, while the music world seems to have seen — with some notable exceptions — little effect. However, this certainly doesn’t mean that the music business doesn’t have issues with sexism, sexual harassment and abuse of its own to deal with.

Naomi Pohl is well aware of these issues. A recent survey for the Musicians Union revealed some stark statistics, with nearly half of all musicians surveyed stating that they had been sexually harassed at work. Those percentages increase when looking at freelancers, with a huge 61 percent believing that they are at higher risk of being sexually harassed whilst working. It is a grim picture of reality.

Now, with the MU’s Safe Space Scheme set up to provide a place for musicians to share their experiences, Naomi is intent on changing the situation. Talking to us over Zoom, she begins to explain why Safe Space is so vital and how it came about.

'People have said you just get used to the culture, women are used to it and have adapted. It takes a bit of time to say, ‘Actually, this isn’t okay.’

‘At the beginning of the ‘Me Too’ movement when the Weinstein case was being investigated, we thought we needed to have a look at what issues there are in the music industry and find out if our members were experiencing this,’ she explains. ‘We had some open meetings, including one in London which I attended.’ Describing some of the stories that she tells me, ‘One of the people was talking about a situation where a label had signed her, and a guy at the label had taken control of her life completely — controlling her finances, but also doing things like watching her go to the toilet.’

She discusses common problems that appear throughout the UK music industry, including those surrounding its historic tour culture. ‘You don’t have female changing rooms at lots of venues, or [you get] women trying to change in their car because there’s nowhere for them,’ she says, ‘or male colleagues bursting into the female dressing room. There’s all sorts of things.’ Interestingly, this conversation is followed just a couple of days later by an (unrelated) tweet from Rebecca Lucy Taylor of Self Esteem expressing her frustration and humiliation at not having proper dressing room space in some venues. It’s apparent that this is not an isolated concern. ‘It’s a massive problem with the whole culture of the industry’, says Naomi, ‘and not just in the recording world. It’s about theatre touring, at grassroots levels, conservatoires, colleges. People have said you just get used to the culture, women are used to it and have adapted. It takes a bit of time to say, ‘Actually, this isn’t okay.’’

Naomi is — understandably — extremely cautious when talking specifics. ‘It’s really difficult to say but I do feel it’s taken the industry a while to face up to the facts,’ she says when I ask her why she doesn’t feel the industry has had its own ‘Me Too’ moment. ‘You still hear rumours of certain very high-profile individuals being protected by the companies they work for, and women signing NDA’s. But we’ve certainly dealt with a lot of cases behind the scenes.’

One case was brought about by ten freelancers — an area of particular concern highlighted by the survey — and it’s something that Naomi is fully aware of. ‘There’s a huge imbalance of power between someone running a major record label for example, and somebody who’s entering the industry and is absolutely desperate to get a foothold. It’s somebody who can basically make or break you, recommend you, book you for work or choose not to. When they do something inappropriate in a taxi, you’re more inclined not to report it and just put up with it. Which is obviously completely unacceptable,’ she tells me. It is a factor that, perhaps, goes some way in explaining why 85 percent of those who have suffered from harassment at work do not report it. When you take into account the shockingly low figures of successful prosecutions in these sorts of cases — even for the most serious of crimes (fewer than one in sixty rape cases lead to a charge in England, let alone conviction) — it is hardly a surprise. ‘It’s very hard to report and very hard to get any meaningful action,’ Naomi agrees. ‘When people approach us it’s because they want to share their experiences, and mostly because they want to avoid this happening to anyone else. They accept that they’re not necessarily going to get legal justice.’

‘If you’ve been sexually harassed, sometimes it takes time to actually let it sink in and recover from it. And that’s before you get to a point where you want to actually take legal action.’

So how does that necessary change happen in what is still an almost entirely male-dominated industry? ‘If you think about who’s booking acts in music venues, it’s mostly men’, Naomi points out, ‘One venue even cancelled an act because they didn’t realise they were female-led!

Many organisations have had male chief executives and male chairmen for very long periods of time, and that’s replicated across the industry and trade union movement. It’s time for a positive change. Noting that Keychange is playing a vital role in that, Naomi does feel that she has started to see change happening. ‘Women In CTRL have done fantastic work saying we need more women and more people of colour at board and senior management level, and that has made a change too. But it takes a conscious effort to actually say ‘How are we representing ourselves?’ But we’re literally just scratching the surface.’

It’s small steps, but they appear to be growing in size. Following a consultation, and years of campaigning, the government is making commitments of their own now to improve the law to protect people from sexual harassment. Simple actions such as extending the length of time in which tribunals can begin will make a huge difference. ‘It’s not like unfair dismissal, where if it happens you know it on day one,’ explains Naomi. ‘If you’ve been sexually harassed, sometimes it takes time to actually let it sink in and recover from it. And that’s before you get to a point where you want to actually take legal action.’

'There is a quite clear statement there that we’re not going to accept this kind of behaviour anymore.’

Other changes are still being requested, such as giving freelancers the same equivalency in protection — and in how their cases are treated — as with regular employees. Naomi is currently working on a code of practice through UK Music and involving BPI, hoping to shift the dial ever closer to zero tolerance. ‘I think having something like that in place will really help,’ she says, ‘not only because it helps to deal with issues, but it should also be a deterrent. There is a quite clear statement there that we’re not going to accept this kind of behaviour anymore.’

She is heartened by the fan and artist response to events such as the controversy involving SSD Concerts in Newcastle and the near-total boycott of Hit The North festival last month, but there is one key action that she still wants more of. ‘I’d like to see men get more involved in this because I feel like it’s women talking about it,’ Naomi says. ‘If there’s a meeting about bullying and harassment, often you get mostly female representatives there, which makes sense. But we need male allies to actually get involved too.’ As she goes on to tell a story of how having a single corroborating witness willing to back up an assault victim can help make a case, it’s clear that this is a fight that needs the whole industry to unite.

To report your own experiences and cases that you have witnessed, either use the anonymous online reporting tool or email safespace@theMU.org. All calls and emails are treated in the strictest confidence and no action will be taken on your behalf without your prior consent.

The Musician's Union are now offering a joint discounted membership with the Ivors Academy. Find out how you can get 25 percent off the standard membership rate.