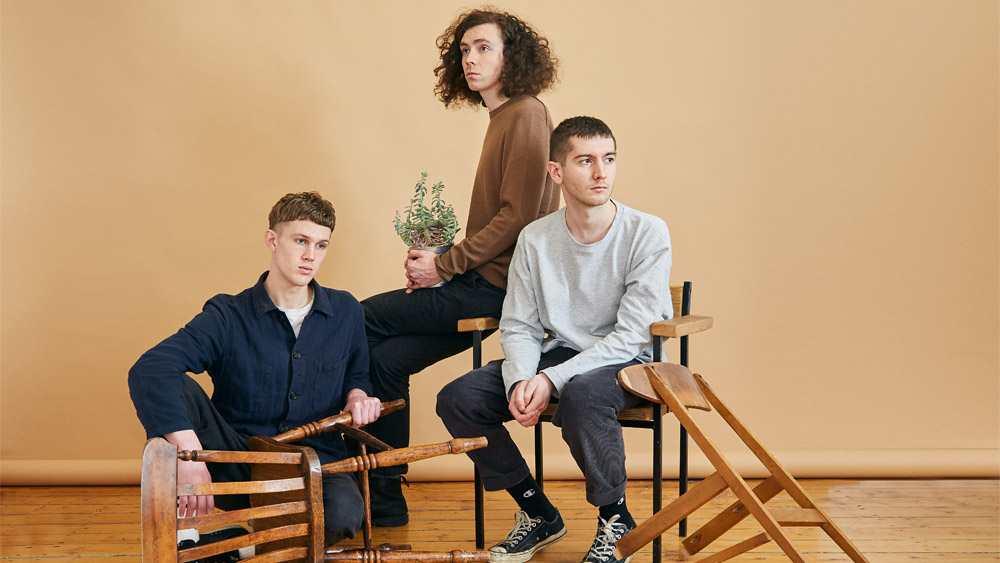 Back in 2017, just a year after the Manchester trio formed, W H. Lung were booked by festivals like End of the Road and Blue Dot, before they’d even played a gig.

At that time little was known about the band, other than the basic information, but their seven-minute-plus single Inspiration! was enough to convince festival bookers to add them to their prestigious bills.

The motorik build of that track had the band swiftly pegged as Krautrock poseurs in the vein of Neu!, but the subsequent material that began to flow from their lives shows revealed an evolving and multifarious synth-heavy sound that the band were beginning to cultivate.

Rather than ride the momentum they created with those initial run of shows and high-profile festival dates, they didn’t scrabble to release an LP, but bided their time instead.

Here we chat to Joseph E. (vocals), Tommy S. (guitar), and Tommy P. (bass) about those early comparisons, their considered approach, and the genesis of their new record…

We’ve known each other for a long time. Making music together seemed to be a natural evolution of the friendship.


The group began as a recording project, what compelled you to start playing live?

We started as a recording project as it was just the three of us and our only plan at that time was to record and release music. We had no big plans moving forward and were taking our time with what we wanted to do.

It wasn't until a live video performance that we started to put a live band in place. Playing live is a necessity, the music becomes something else, bigger. Familiar songs are free to change with each new environment and there’s always a certain energy at stake.


You got a lot of high-profile festival booking offers following the release of your debut EP, what challenges did that throw up and what did you learn?

Well, we had to write a set. The first two songs came out after we had written two songs and deadlines help decisions, so we manically wrote.

It was very exciting to discover who we were on stage in big festival environments. I think we became confident live as a result of these early sets.


Despite the buzz you didn’t rush-release a debut record. How did you resist hurrying something out and what have been the benefits of that approach?

We wrote quickly to fill the set, but we kept the bar high. Every song on the album is the best of three others. There’s a scrupulous crafting and diligence to our album and we’re very proud of that.

Reticence and patience can be hard when the opportunities are presented but it’s made us who we are now and so we’re happy about that. The discipline that we’ve developed as a practice and a philosophy has meant we’ve only done things we’re proud to put our name to.


What were the writing and recording sessions for the new album like?

We wrote together and apart in a shared house for two years. Sometimes a synth line would start the proceedings and sometimes a bass melody. We worked off each other’s ideas in continuous collaboration – ridding the ego as much as possible, writing for the band and not the individual. We started, dropped and incessantly altered each other’s ideas knowing that the material was primary.

Recording was always productive and always fun. Our producer and friend Matt Peel introduced us to the wonders of modular synthesis and so many hours of tinkering by the electric wall later, the album is full of it. There is a pre-production process with Matt for every song and we spend a huge amount of time exploring different sounds and textures before committing to anything.

We learnt a lot during the recording process, and I think this shows from the contrast between an earlier song such as Inspiration!, and a song like Overrnight Phenomenon. We were writing songs at the end of the process that we wouldn't even have known how to when we started, and Matt played a huge part in this.


What’s the thinking behind the new record?


You’re often compared to krautrock bands like Neu! What are your primary influences?

Which is interesting as it’s not a style we listen to that much. We all listen to music as much as possible. Peggy Gou went into this record, but so did Thelonius Monk. Even if it’s not immediately audible, ideas grow from somewhere and we try to steal as much as we can from a wide a field as possible.


How do you think your sound has evolved since you started making music together?

When we first started writing music together none of us had even touched a synthesizer or a drum machine. It wasn't until meeting Matt that we started to turn to instruments other than our own, and so our sound has changed quite a lot over the writing process for this album.

I think we've learnt to do what is best for the song when writing, and not feel like there needs to be a guitar part here, or a bass part there. We are also conscious to not repeat ourselves and constantly go in different directions with the sound, so I'm sure that the next album will be something completely different.


What’s the last great piece of music you heard?

We're doing our first tour in May once the record is out and finishing up with a Manchester show at Band on the Wall with Working Men's Club. We've also got a couple of festivals in the UK and Germany planned later in the summer.

Other than that, we'll be continuing to write new material and trying to get a sense of what direction we want to go moving forward. The last album was very much written in a studio setting and I think you can tell from the repetition and layering in the songs. It would be interesting the write the next record in a different setting and see how it turns out.

Incidental Music will be released on 5 April via Melodic

11 May Gold Sounds Festival 2019, Leeds
11 May The Shipping Forecast, Liverpool
13 MAY The Garage, Glasgow
14 May The Bodega, Nottingham
15 May The Green Door Store, Brighton
16 May The Louisiana, Bristol
17 May Heartbreakers Bar, Southampton
18 May Oslo Hackney, London
14 Band on the Wall, Manchester