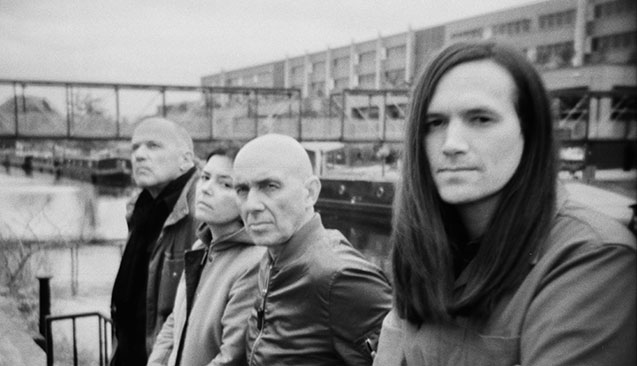 Sonic wayfarers UUUU on bad habits, good vibes and how 2018 will be the year of 'live shows and long lunches'...

Between them, London quartet UUUU must have a century’s worth of experience at the vanguard of experimental music – making them a bonafide super-group for the switched-on.

Swerving from seething racket to spaced-out soundscape, their recent debut self-titled LP was a thing of rare beauty – a rock record with real imagination and musical chops.

Now preparing for their first string of gigs, we get the inside track on the band's hypnotic sound and learn the merits of studio improv…

How did you form UUUU?
Matthew: I remember Graham mentioning to me first, the idea of getting the four of us together to see what might happen. We had all worked, toured and became friends over the past couple years in various situations… Thighpaulsandra had played keyboards on tour with Wire in 2013 and I was/am/always really keen to work with him on any project and I’d asked Valentina’s band Tomaga to open for Wire on some UK dates around the same time as I am a big fan of theirs, so really it was a no brainer for me to respond positively to Graham’s suggestion...

You’re all active in other projects – how does your approach to UUUU differ to the other things you’ve been involved with?
Valentina: It defers naturally to anything we have individually done just because it is the sum of it all.
TPS: It doesn't differ really.  I just do my usual thing.
Edvard Graham Lewis (EGL): Pretty much the same as TPS… get on board, listen and start paddling….
Matthew: I just was happy to be actively encouraged when I started hitting my guitar with drum sticks and balancing metal bowls on the strings!

What are your worst musical habits?
Valentina: Purchasing far too many records and listening to only a fraction of them due to lack of time.
Matthew: Hitting my guitar with drum sticks and balancing metal bowls on the strings
TPS: Mashing the keyboard with my forearms and then expecting my collaborators to decipher the resultant mess.
EGL: I wish my labelling and librarian skills were more acute!

How did your debut album take shape? What was the thinking behind it?
Valentina: The four of us got into TPS’ incredible studio and started communicating to each other. No planning, no scheming, just inventing a new language to express ourselves.
TPS: We played for three days, recorded most of it and then did a little editing.
EGL: Well, the premise was to record an album in three days without any pre-prepared or composed material… ostensibly to improvise… to record together/jam, this we did for a day and a half then we evaluated and edited the results.

So it was always your intention to create an album with a live feel?
TPS: Yes, it was largely played live with a few minor embellishments.
Matthew: It was improvised live in TPS’ studio and although we then spent time cherry picking and discarding after two days recording, the main basis is of the record remained essentially what the four of us did live in the room.

What do you make of the current state of experimental music in the UK?
Valentina: There are few keys elements that add to the current experimental music scene and certainly lot more interesting artists and projects benefiting from them. New spaces, new venues and a new sense of doom and gloom that helps reinstating faith in the experiment, in the unknown.
Matthew: London and the UK has had a healthy tradition of experimental and free improvised music, that continues to thrive, although somewhat out of site, there’s a great sounding space near Waterloo, called iklecktik, and of course Cafe Oto provides a great home to those who are more out there.
TPS: I have no idea as I don’t really listen to ‘experimental’ music.
EGL: I live in Sweden where ‘experimental’ music is in robust health.

What does 2018 have in store for UUUU?
Hopefully lots of live shows and long lunches. Our London debut is on 25 January at Corsica Studios - you should all check the show out!