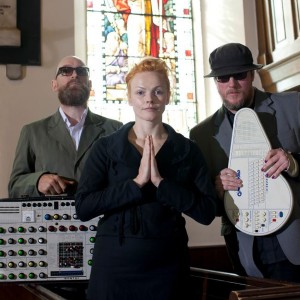 The Eccentronic Research Council are vintage synth enthusiasts Adrian Flanagan and Dean Honer. Along with actress Maxine Peake, they released 1612 Underture, their ode to the plight of the Pendle witches. M spoke to them about magic, moogs and muffins…

‘I never expected to be going on The Culture Show and being taken seriously by all these clever people. I’m just a nobhead from Salford…’

So says Adrian Flanagan of The Eccentronic Research Council (ERC) a man for whom self deprecation obviously comes easy. He may downplay The ERC, the latest musical vessel carying his electronic experiments, but their recent 1612 Underture album has pricked much public interest, not least for the appearance of one-time Shameless actress Maxine Peake intoning over the sounds of their vintage synths.

1612 Underture is a collection of songs based on the plight of the Pendle Witches, nine men and women who were rounded up and tried for witchcraft. It’s a suitably colourful theme for two electronic lovers who’d always go for the perverse over the obvious. M had the chance to quiz Adrian in a rare interview to get his take on moogs, magic and, as one M reader asked on Twitter, is it ‘barm’ or ‘muffin’?

How did The ERC form?
Dean found me grumpily writing songs in the office of G2 Studios in Sheffield when the All Seeing I rehearsed in the studio below.

They'd get on my nerves as all these local pop stars would be coming and going all day long. I’d be trying to record on my little four track upstairs while the likes of Jarvis Cocker, Phil Oakey and Roisin Murphy would be bloody buzzing that office bell.

I remember one time a pigeon flew in because one of the daft gets had left the door open, so I spent 15 minutes trying to catch a pigeon in a sheet with Phil Oakey!

During this time Dean took an interest in the raw ditties I was writing and invited me to his studio to record some tracks and write some songs.

How did you manage to get Maxine involved?
Maxine actually appeared in a video for me for the debut Chanteuse and the Crippled Claw single entitled Are You One?

I wrote to her asking if she'd dress as a giant bunny rabbit, have an arm wrestle and let me chase her with a water pistol around a moor in Kersal, Salford in exchange for some rockabilly records and a signed picture of Pat Phoenix. She said yes!

On paper The ERC is totally ridiculous. If 10 years ago, some gypsy woman looked in her crystal ball and predicted I’d be writing words and music for an avant garde analogue synth group fronted by my favourite actor Maxine Peake I’d of asked for my money back.

What attracted you to the Pendle witches?
The Pendle witch story of outsiders being demonised by the government feels very relevant to that of modern day Britain. And I guess that’s why it has connected so positively with such a diverse audience. It’s more than some fun folklore record about witches and broomsticks. I’m not saying it’s a Billy Bragg record either. It’s my love letter to Lancashire and to women.

How did you write the songs?
It started off being Maxine and I saying let’s write something about the Pendle witches and not really knowing where it would end up. Then I went away and wrote all the words and a few songs and Maxine liked them and agreed to read them all. I then asked Dean to get involved in helping me build some analogue environments for the words.

But it was a really cool way to work. We treated it more like a soundtrack to a radio play than a pop record.

What relevance does the plight of the witches have to 21st century electronica music fans?
I'm not sure I care. I don't really relate to a lot of modern electronic music but more to female electronic musicians of the fifties and the sixties - Ruth White, Daphne Oram and Delia Derbyshire.

I feel electronic musicians still think it's a bit of a boys only club but for me the most interesting stuff in electronic music has been coming from the ladies, be it the genius of Trish Keenhan and Broadcast, Leila, The Sisters of Transistor or Tara Busch. Live we are more like the Moog Quartet than say the Prodigy but with Maxine Peake fronting it. We don't do ‘banging’ but we do ‘shit the bed scary’ pretty well.

1612 Underture is obviously rooted in a specific time and scenario - where are you looking for your new material?
The next ERC release will be a series of cassettes. Dean and I have been sound-tracking the real dreams and nightmares of a whole bunch of people. We've got scientists, journalists, documentary makers, actors, outsider art gallery owners and teachers who've all recorded dreams for us.

I've also just recorded another big story with Maxine which Dean and I are building the music around at the moment for the next ERC LP. I don't want to repeat myself and do another witch record. I think we've done that and it won't be bettered by us or anyone else!

I'm already researching my next story and wanting to write a TV pilot before the year is out.

For years I lost loads of money from plays on Radio 1 because I could never afford to join PRS for Music. Not so long ago it was £100 to join and £100 to me was a month’s worth of shopping and a bag of weed.

My only venture in the ‘real’ music industry was doing a publishing deal for my Kings Have Long Arms tracks with Domino Records.

As part of my advance I got them to pay for my PRS for Music membership. Domino then brought out a single for me which got loads of radio and was playlisted on the BBC. So for the first time ever, I got some royalties and bought myself a pushbike with the money to go to work on. Five minutes after leaving the shop I was lying on the floor of Abbeydale Road in Sheffield with both of my arms badly broken. The following week you could join PRS for a tenner and I spent the following three years learning how to re-use my arms.

That pretty much summarizes my music industry experience.

Any advice for aspiring musicians looking to break into the music industry?
Anything that takes an age to break in too can only take the rest of your life to break out of. So sign nothing and try and work out how to do it yourself. Be amazing, remember you are free and you are not Faith No More. Unless of course you are Faith No More.

Is it barm or is it muffin?
In Salford it’s a barmcake. In Sheffield where I live they have a strange habit of calling it a breadcake. Weirdoes. I don't know what kind of freak calls a barmcake a muffin though? A muffin sounds like the name you’d give for a very trendy vagina in Hebden Bridge.

Which film would you love to score? And why?
The White Bus by Lyndsey Anderson and written by my home girl Shelagh Delaney. It's a psychedelic journey on a bus around my home town of Salford. I'd like to do an ERC soundtrack to that as it’s where I'm from and I love Shelagh!

Have you taught Maxine to repair vintage synths? Is she any good at soldering?
Maxine is always on hand with a tub of flux and a soldering iron in case we have a fallen oscillator.

The ERC will be performing live at Village Underground, London, on 17 May. The gig is the band’s first London show and also the first in a series of events being organised to celebrate 100 years of electronic music by Noise of Art. Find out more from their website www.noiseofart.org.

Read our interview with Noise of Art founder Ben Osborne.
Features
Back to top