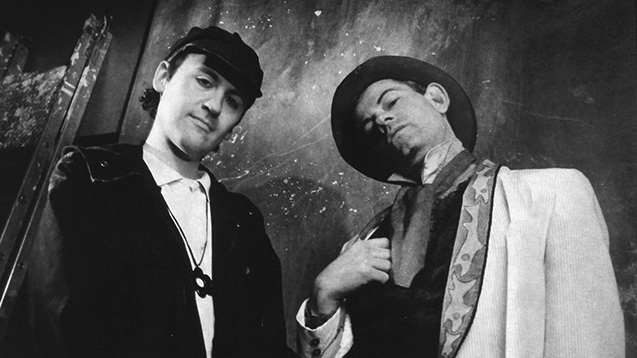 'It was not really conceived of as an album at the time, because we were having fun!' Jowe Head on the cult indie heroes' long-lost record...

Indie heroes Television Personalities formed in 1978, just as the first crashing wave of punk ebbed. With a string of satirically titled albums including They Could Have Been Bigger Than The Beatles and pop culture-defining songs like Part-Time Punks and I Know Where Syd Barrett Lives, the post-punk quartet have since earned cult status.

Centred around the songwriting talents of the elusive Dan Treacy (pictured, above left), the godfathers of the C86 generation may have perched nonchalantly on the outskirts of mainstream success, but their influence spread far and wide.

Acts including the feedback-drenched The Jesus and Mary Chain and awkward pop stalwarts The Pastels took note, while the band’s psychedelia-fused experiments paved the way for post-millennial acts like MGMT, who paid homage with their track Song for Dan Treacy.

Now, diehard fans are being treated to a long-lost Television Personalities record. Unearthed from the vaults and set for release on 26 January, Beautiful Despair was recorded in 1990 at guitarist Jowe Head's flat in Stoke Newington, London and features both Jowe (pictured, above right) and Dan Treacy.

Here, we chat to Jowe to find out more about the 15-track gem...

What prompted the release of Beautiful Despair? How did it feel re-discovering the material?

I recorded this material at my flat in Stoke Newington back in 1989 to 1990 with Dan Treacy on my four-track cassette Portastudio. He was a very prolific song-writer and we worked very spontaneously; a handful of songs at a time. When we recorded, it was always kind of an organic process – we didn't always think in terms of a new album.

We instinctively documented our work because we are a prolific, creative pair of musicians and we enjoyed the process. Being a visual art as well, I'd say that it is a creative project, like painting. I must admit that I mislaid the tapes and rediscovered them when I was looking for something else. There was a long process of digitally transferring the tapes and then improving the sound quality, editing and mixing them. A long-term project, indeed!

Why was it not released at the time?

I have so many musical projects to occupy my time and creativity, that I tend to concentrate on what is happening right now. I have plenty of archive projects to resolve as well, including some relating to my first band Swell Maps, so it is a question of what feels right at the time, and when the circumstances allow a project to move forward.

There was actually more than enough material for an album, but some of the tracks were unusable because of technical issues. Fire Records heard about it, so they expressed an interest and encouraged me to finish mixing it.

What were the influences for the album – what were you both listening to or thinking about?

We knew a lot of 'indie' musicians who were somewhat precious and blinkered when it came to their influences, and would not admit to listening to anything but paisley-shirted psychedelic bands from the 1960s! We were digging contemporary pop like Prince, Madonna and Abba, as well as the more obvious influences like Love, Byrds and early Pink Floyd.

What do you remember about the writing/recording sessions? What was the mood of the band?

Dan and I would meet up to talk about plans and I'd listen to his new songs and some were more memorable than others, so I'd nag him about certain ones that would be good to record.  We were optimistic about greater things, and indeed we went on to visit exotic places to plays gigs for the first time, like the USA (twice) and Japan (twice) over the next few years, which was very exciting.

It was not really conceived of as album at the time, because we were having fun! I think that part of the charm of the project is that it is more relaxed and spontaneous than one would usually expect from a conventional studio recording. Dan sometimes allowed his humorous side to show through when singing, and sometimes performed impressions of people that we knew.

What’s the story behind If You Fly Too High?

If You Fly Too High was inspired by meeting one of the several amusing characters that we bumped into on our adventures. We met Evan Dando of The Lemonheads in Berlin. We were sharing a New Years Eve gig at a place called the Ecstasy Madhouse club. It was a wild night and the Berlin Wall was coming down.  Evan was becoming very well-known and had a hit record, he seemed like the ultimate charismatic American rock star – very handsome and very hedonistic. We jammed with him on stage and had fun playing some Jonathan Richman songs. Dan is having fun doing a caricature of him!

Television Personalities paved the way for many acts. How did it feel being part of such a cult band?

I was aware of the fact that TVPs were very influential, and Dan was as well. His first few albums before I joined were lapped up by people like Alan McGee (Creation Records founder) and his crowd in the UK, and others abroad as well, who copied the style. Some bands made it more commercially successful. Most of the Creation bands at the time seem to show direct or indirect trace of this. Dan even makes a reference to Alan and Creation on his song Goodnight Mister Spaceman!

14th Floor was one of the first UK independent records released by a band. Looking to today’s scene, do you think it’s still possible for bands to remain independent?

A lot depends on one's definition of 'independent'. Much of what gets referred to as 'indie' isn't 'independent' at all – it is merely a vague style. The Television Personalities and my first band Swell Maps recorded and released our first singles on our own self-financed labels at roughly the same time in 1978; that is how I got to know Dan.

We were among the first to do that, along with Desperate Bicycles and Buzzcocks. We financed it all ourselves and tended to every stage of the process, including getting it into the shops. There are more independent manufacturing and distribution companies to facilitate this now, so it is easier to achieve that these days, so many bands can release a record on their own label if they have enough determination and initiative.

So many bands still see 'signing to a major label' as their aim, as if it is the accepted career path. In fact, most bands get dumped even faster these days, after only one release, unless they are immediately successful.  There is so much competition!

How do you envision the band's legacy?

The TVPs were a maverick band featuring some remarkable characters and many amazing ideas, led by Dan Treacy – an inspired singer and composer. This is why the legend of the band endures and why the records still sound appealing and unique, attracting a worldwide cult following. For example, there is a label based in Canada called The Beautiful Music, which specialises in releasing albums featuring young bands exclusively playing TVPs cover versions, which is now up to its fourth volume!

Beautiful Despair is out on 26 January via Fire Records.
Features