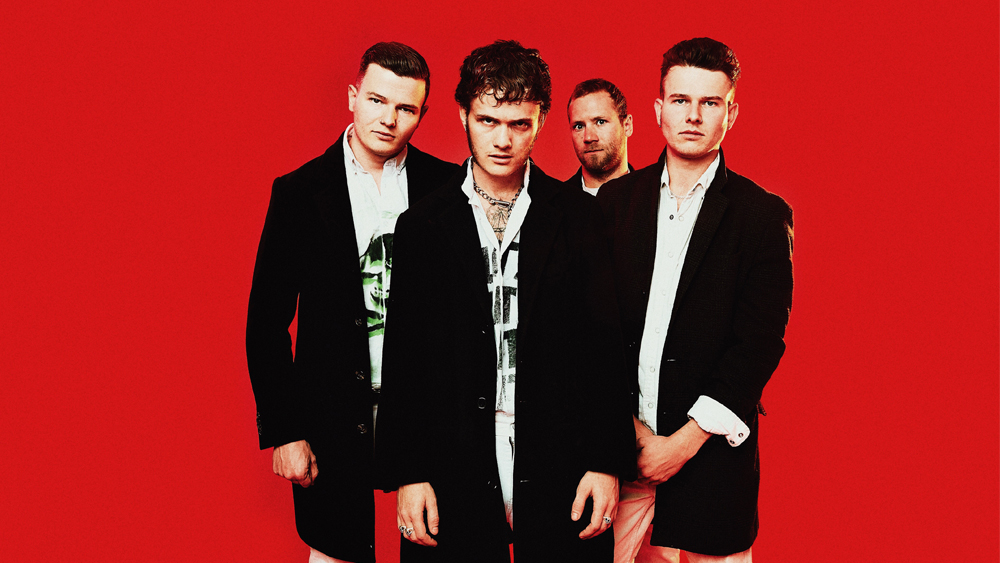 ‘The word punk has been chewed up, spat out and regurgitated by every suit in the music industry, but the anger remains': get to know Blackpool punks Strange Bones.

‘The word punk has been chewed up, spat out and regurgitated by every suit in the music industry, but the anger remains,’ says Strange Bones vocalist Bobby Bentham.

The Blackpool four-piece, comprised of three brothers (Bobby, Jack and Will) and Spud Newburn, are steadily fashioning that anger into their own image.

Raised on a diet of classic punk, Strange Bones have taken the genre’s essence and bent it into fresh new shapes with singles like Here Come the Wolves and Vicious.

In addition to their musical endeavours Bobby is a tattooist and Will is an established street artist, and perhaps unsurprisingly the band is as experimental with their visuals as they are the music.

They have a live show coming up in December at London’s Werkhaus where they will create an AV landscape from the band’s artwork surrounding the Blitz EPs.

Ahead of the show Strange Bones are releasing their new single Napalm Über Alles today (Friday) from their forthcoming EP Blitz Part 2, and we caught up with Bobby to get the lowdown on the band's story so far...

Three of us are brothers, and we’ve known Spud (drums) since we were kids. We were thrown into music from a young age, we started playing music naturally as the house was full of instruments, which is exciting when you are a kid. Strange Bones formed a few years ago as a natural progression from years of messing about with music.

Who or what are your biggest inspirations?

I think my biggest inspirations were the people close to me growing up, my parents and their mates who all played/play in bands – Richard King (Zanti Misfits), John Robb (Goldblade/Membranes), Charlie Harper (U.K. Subs). This list goes on. As I grew so did my inspirations and I found myself inspired by all types of electronic and experimental music from Aphex Twin to musique concrète. I would say I have also been inspired by the words of Guy Debord and George Orwell as well as other writers.

Whats the story behind your upcoming EP Blitz Part 2?

It’s my commentary on modern life: our reliance on algorithmic happiness, a helter-skelter mentality towards the ruling class, being close to death and the hyper-normalisation of society with anxiety.

Writing is like drugs; you can be so high and then so low. It’s the poison and the antidote. It’s strange how you can spend 18 hours writing a song to then decide you hate it, then write your new favourite song in 20 minutes at 5am. My writing process is all over the place, but I usually find myself starting songs with an 808.

I recorded and mixed the EP myself, which will be our first body of work made completely in-house, an empowering feeling considering how much money it costs to produce and release music.

How has your music developed since your early recordings?

A lot has changed. I never really had a solid vision of where I wanted to take this when we started, whereas now I know exactly where this is headed. For LP one anyway, fuck knows what is going to go down on LP two.

So far, you’ve released a string of singles and EPs – do you have any plans for a full-length release or are you going to stick to this model?

Absolutely. It has been a build up until now, which has also been me deciding what I want LP one to be. You could say everything until now has been an experiment to get to this point, which is fucking exciting for me.

Your upcoming shows promise to be an AV extravaganza, what can we expect?

Just London unfortunately, there isn’t enough room in the van to bring it on tour. We will be showcasing some of the video/paint and installation artwork made surrounding BLITZ so far. As well playing a show where we will play the EP in full.

How do you feel about the UK punk scene at the moment?

The UK punk scene is thriving, we have so many great bands coming through, a handful of which probably wouldn’t even call themselves a punk band. Punk to me has always meant living by your own politics, doing it yourself, having something to say and just doing it because its fucking fun. The word punk has been chewed up, spat out and regurgitated by every suit in the music industry, but the anger remains. ‘Punk’ or not.

Slowthai – Nothing Great About Britain.

What’s next for Strange Bones?