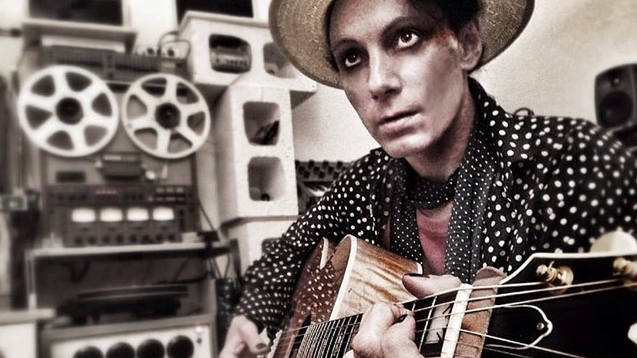 As an artist, musician, poet, producer and even television presenter, Sterling Roswell (aka Rosco), has pretty much been there, done that and possibly purchase the t-shirt.

Initially playing drums with Spaceman 3, he was also a key component in the musical engine room of indie rockers The Darkside before exploring other creative outlets in the forms of production and songwriting. Most recently, he’s risen to the fore again with the release of his brilliant solo LP, The Call of the Cosmos via Fire Records. We caught him performing at Andrew Weatherall’s weekender in Carcassone last summer and totally fell for his musical charms. Check out our in-depth interview below and come with us on a trip with one of the realest radicals…

My fondest music memories are of travelling around with my folks in their little car. It didn’t have a radio so we sang old songs from the Woody Guthrie children’s songbook and Scottish folk songs.

I heard The Beatles' Red and Blue albums that my mother bought, plus other sixties LPs from the Stones, Jimi Hendrix and Curtis Knight, Yardbirds, Billy Fury.

The first record I owned was by The Jimmy Castor Bunch, a fuzz drenched funk guitar number called Luther The Anthropoid. It was in a supermarket lucky dip bag of 45’s.

How did you make the transition from being a music lover to music maker?

I still see myself as very much a music lover. But I started out just trying to express myself. And impress girls. It was after seeing bands on television, I decided I would have a pop at music myself. Rugby was a small town in the late seventies and there wasn’t much interesting happening.

How did you end up joining Spaceman 3? What are your best memories from that time?

As with so many things I’ve done, I joined the Spacemen by default. We had all been friends since school and hung out at the local record shop on Saturday afternoons. It just seemed like a good idea.

They asked me to play bass back in 1982. Pete [Kember aka Sonic Boom] and Jason [Pierce] came round to my house but my mum went ballistic after seeing these two punk junk kids at the door. I was only 15. Pete looked so out of it, like he had just shot up in the alley and Jason had so many rips in his bleached jeans that his balls were hanging out. I didn’t join at first. I wasn’t confident enough and my parents forbade me.

We, the band, shared a couple of houses in Rugby, renting a small terrace house that my mother helped guarantor the deposit on. Pete would come by every day and we would all jam and trip together. We were all into rock and roll, music like Alex Chilton, The Cramps, Tav Falco, The Velvet Underground, Suicide, Stooges … It was unusual to find friends that liked off beat type music. 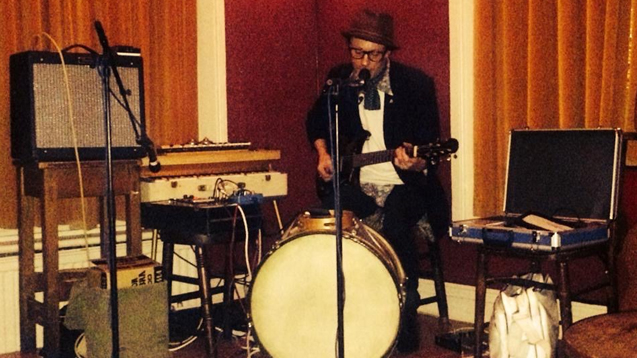 Right after the first Spacemen 3 album Sound Of Confusion came out, Natty, the original drummer, decided to quit. They tried a couple of people to replace him, but they didn’t get it so I had a go … I’d never actually played drums before so it was quite a challenge.

I knew their covers of The 13th Floor Elevators, Stooges, Juicy Lucy, songs, so I kind of picked it up as I went along. That was it.

Of the albums I play on, The Perfect Prescription became the benchmark album. It was a proper band in those days, with every one contributing towards the whole in the way a really good band does. Each album had different personnel and was why the records sounded different. I learned from being in that band you shouldn’t take your eye off the ball for too long and make the most of it while it lasts. Life is too short for fussing and fighting.

You’ve since been in numerous outfits (including The Darkside) and lived in Rome presenting a TV show? How did these projects come about?

Again, joining The Darkside was by default. Guitarist Nick and I were friends from school days so I thought I would try it. It kind of worked out well.

We made a new demo and were signed straight away by Beggars Banquet, at that time a pretty cool and happening label. After a while The Darkside broke up, so I went back to art college to finish my studies, eventually moving to Rome on the invitation of a friend. I had only really intended to go for a few weeks but ended up spending almost three years living there, DJing, playing the odd gig and working on a television show. It was a great time.

Call of the Cosmos is your latest album - what inspired the record?

The Call Of The Cosmos, people seem to like it, the reviews have been amazing, although if I am to believe my record company statements, hardly anyone has actually bought it. It was inspired by the book of the same name by the Russian science fiction writer Konstantin Tsiolkovsky. He believed that colonizing space would lead to the perfection of the human race. There are also references to Phillip K Dick, Antoine de Saint- Exupery’s The Little Prince and a cover version tribute to the late great Sky Saxon, most well known for being the lead singer in the proto punk band The Seeds. The song Tripmaker was featured in Roger Corman's cult movie The Trip written by Jack Nicholson and features Peter Fonda and Dennis Hopper.

There is no real way to control it. It comes and just as quickly it can go, I find that being in a stable, stress free home environment helps and also I get a little help from my friends. My dear friend Neil Brockbank, the brilliant engineer and producer at Goldtop Studio, has helped me immensely over the years, especially with the technical side of things. Also Nick Lowe and his group, they back me up on my song Give Peace Another Chance.

What attracts you to psychedelic sounds?

What have been the highlights from your musical career?

1987’s Acid Daze Festival was the first really big gig I played, on the same bill as Hawkwind, The Pink Fairies and Suicide in a huge old tram shed in Leeds with Spacemen 3, that was amazing. More recently Andrew Weatherall invited me to perform at his amazing festival at Carcassonne in the south of France, inside the court yard of the medieval castle. I pulled a band together for the show that included my old friend Pete Bassman from the Spacemen and Darkside days.

What are your thoughts on the music industry?

I’m so not on it when it comes to the business. But it really rubs me up the wrong way when people expect you to a day’s work for less than a day’s pay. Music is something that should be free when food and shelter are also free and when people stop playing up to the old ways of living life, religion, wars, fighting and such like for capital gains. The world will be a better place when a unified peace can be achieved.

The music business is getting better it seems. Societies like PRS are playing a big part helping the musicians that need it, especially when dealing with the kind of shark-like business men who operate in the dark underworld of the modern music business. You always need to check the small print and don’t sign until you understand what the contract actually says. I’ve made this mistake and am still paying for it now.

I’m working on a new single at the moment about how Barrack Obama keeps Dave Cameron’s brain alive in a jar of nutrient jelly. It’s a pure science fiction idea inspired by watching too many B movies, and the state of affairs here in the UK at the moment. It’s about a greedy little man that is supposed to be working for the good of the nation, but instead tries to rip off the system that people have worked so hard to build - the NHS and the welfare of the people is being traded off the jet set life styles of a class of pig fucking, oil spilling, gun running Tory terrorists.

Have you any advice/tips for aspiring songwriters?

Do what you feel is right ... and don’t ever give up on your dream.

Listen to Sterling Roswell's Give Peace Another Chance from Call of the Cosmos below.

Sterling is out on tour in February and March - the dates are: