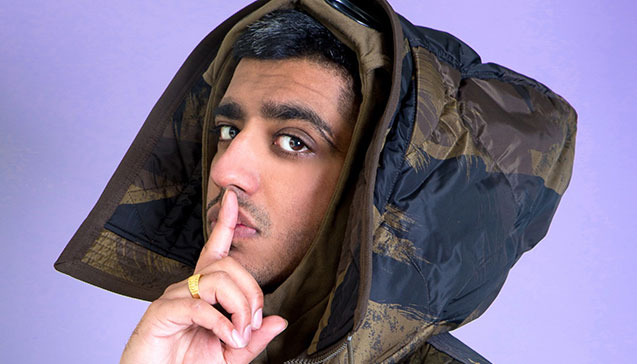 'Minorities are now part of the British mainstream culture – we’re living in the age of social where this is now possible': hip-hop super-producer Steel Banglez on how UK rap went mainstream...

Super-producer Steel Banglez is an East London music institution who’s helped shape the fortunes of UK rap for over a decade.

His discography reads like a who’s who of the breaking British music scene, with game-changing productions for Mist, Dave and Yungen all in a day’s work.

Paying his dues over the years, his midas touch can be heard everywhere, from tracks by Giggs, Ghetts, Wiley, Krept & Konan and Mostack to a remix of Rudimental’s Sun Comes Up.

Here, he lets us in on his musical beginnings, his love of grime forefather Dizzee Rascal, and why the time is now for UK rap…

I come from a very musical family in India – they’re all into music, they’re professors and doctors of music. Before my mum came to England, she used to sing and play harmonium – my dad is also a poet – so they write and make music very well. It was natural for me to be influenced by them at a young age. They’d put instruments in front of me and encourage me to figure them out myself. Then growing up in Forest Gate in East London also had a huge impact on me. It was during UK garage – when I was nine or ten, my older bro got some turntables – I followed in his footsteps and started learning young.

Eventually after DJing for some time I ended up moving into production just as garage started morphing into grime. Weirdly, my neighbour was D Double E, and he opened my eyes to grime instrumentals. I started remixing them – that’s how I got into music production.

It must have been amazing to have been right in the thick of it all when it was blowing up?

I remember Dizzee Rascal’s I Luv U smashing it, it was one of the first songs that tipped over for grime, I remember the video on Channel U. You’d hear it everywhere – I remember being round the boys house on the estate, watching Channel U all day and it’d be Dizzee and Kalashnikoff’s Murder – when I heard that last one, that’s when I learned about the tempo changes. I knew that rap and hip-hop would be more successful eventually in the UK than grime because of the tempo – it’s more successful and sustainable. I can’t consistently listen to grime – I don’t think you can – and no one has created the perfect piece yet. Boy in Da Corner – it’s not just grime, the same with Kano’s Home Sweet Home.

So are the sounds and scenes of UK grime, hip-hop, rap all merging into one?

We are at a place where the people I grew up with – DJing jungle and early drum n bass – they were my influences – their children have subconsciously embraced these sounds. And this music that we make – the sound is now mainstream – it’s not going anywhere - it will sit next to Anne Marie and Ed Sheeran. No Words I made with Dave and Mostack, it’s been in the charts for the last 12 weeks and five years ago this wouldn’t have happened. It’s mainstream and going nowhere. People like Dave, Stormzy, AJ Tracey, they are making sure it’s locked in the mainstream.

And minorities are now part of the British mainstream culture – that’s why you’ll hear Dave, Stormzy next to Adele or Frank Sinatra. We’re living in the age of social where this is now possible.

Which of the new breed of artists will be set to take over in 2018?

Not3s is one of the starts of this new generation. He is a fine example of consuming Krept and Konan and J Hus and now being who he is at 18 or 19. Dave is gonna be massive this year.

Outside of London, Birmingham is definitely fertile for new talent. It’s going to be everywhere but at the same time you still have to prove yourself in London. That’s why Mist did well, he proved that.

Why is Dave going to be a star?

Firstly, from a marketing perspective, without the music right – I went to my friend’s birthday and his family are fully cockney mate – it was a birthday we had a great time – the uncle, Uncle Bobby was like – so Banglez I love this geezer called Dave. I was like ‘of course you fucking do, his name’s Dave mate’. We’re in Britain. It’s easy to say you love Dave cos Dave’s a good guy bruv. I know loads of Daves. They’re all good guys – so that name is genius. His Britishness vocally will also help make him very successful. That’s what’s special, on top of that he’s a great musician, he plays the piano, he produces, sings and writes – Dave is a true artist. He’s amazing.

What else have you got coming up this year?

I’ve just finished the Mist project, Diamonds in the dirt, I think we’ve revolutionised UK rap again with the beat and the sound – the market has been saturated with people copying our style and we’ve switched it up. I’ve got my own EP coming out at some point and the regulars – being like a mentor – I’m like the captain of UK rap and hip hop and steering it into the right places at the moment of safety so we can really do it and settle in. It’s down to me to keep inspiring the next generation. That’s where I’m at – I feel like Dr Dre to be honest. I don’t have an ego so I don’t want to be like that but I feel like that’s what we’re doing…

This interview forms part of our Formidable Flows feature in the current issue of M magazine.

Steel Banglez, P Money, Ms Banks and DJ Target are among the talent slated for the inaugural BARS careers event, which takes place at the Barbican, London, on 11 April.