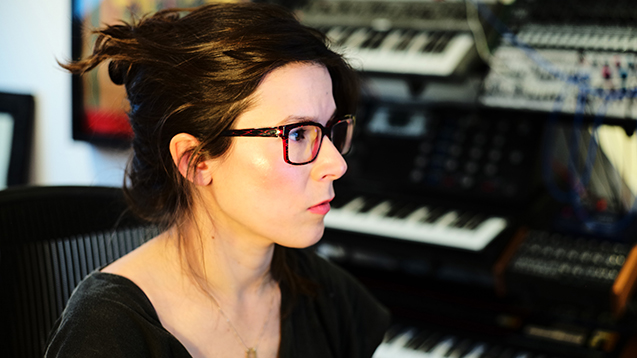 'If you haven't cracked the basic idea in 20 minutes, then you're going down the wrong path - The Durrells, Victoria and Collateral composer gives her advice for TV and film scoring...

'I remember being about three or four years old and crying to the Incredible Hulk end theme as David Banner disappeared down the road, and the first album I asked for when I was five was the Flash Gordon soundtrack,' she tells M of her early interest in cinematic sounds.

Ruth studied music at Cambridge University and composition at The Royal Academy of Music, and got started in the industry by setting up a music production company, Rubykon, with her now husband Ruskin Williamson.

She cites BAFTA award winning composer Martin Phipps as a key mentor along the way, through whom she secured her first drama to score.

Since then, she's gone from strength to strength as a composer, programmer and instrumentalist, with other works including Remember Me, Love Nina, The Take, Twenty8K and Collateral.

Ruth's work will be heard next on screens for season three of the critically acclaimed The Durrels, which returns to ITV this Sunday (18 March) at 8pm.

We caught up for a chat beforehand to find out her advice for getting into screen composing and what else is in store...


How did you get into film and TV composing? Was it something you had always set out to do?

I grew up in the eighties and loved watching TV shows, especially the adverts, as there were great jingles and theme tunes at that time – Martini, the Milk Tray man, Flake, Knight Rider. I remember being about three or four years old and crying to the Incredible Hulk end theme as David Banner disappeared down the road, and the first album I asked for when I was five was the Flash Gordon soundtrack.

Music for film has always affected me emotionally. I started writing pieces at around 15: my piano teacher/mentor at that time, composer Nigel Crouch, really sparked my interest in music. We improvised around classical pieces like the Rite of Spring and I learned how to compose in the moment – a good skill to have when you're up against a deadline!

When I left university, I got in touch with a music agency and took along a cassette of some music I'd written for theatre. They liked it and started giving me ad pitches to do.

I had no studio equipment apart from a 16 track clavinova, so I got a loan and bought a JV1080 and a Mac to get me going. I then worked at ITV in sound post-production for a few years where I met producers and directors, scored my first documentary and met my husband Ruskin – a sound engineer, as well as electronic music afficionado, composer and synth super-geek.

We started a company together to write music for ads and TV documentaries. When I left ITV, I worked part-time for a recording studio, Strongroom, and met composer Martin Phipps. I started shadow writing and assisting for him, and through that, got my first drama to score. He's been a brilliant mentor and has had a huge impact on my career.

What advice would you give to composers wanting to catch their first break?

Getting a showreel that stands out is tough – but if you get goosebumps when you listen to a piece of your music, then that's got to be a good thing. Those pieces were always the ones that got me places, rather than trying to write in lots of different styles or second-guess what people will like.

Then it's getting to know people in the industry, which is an obvious thing to say, but it can literally be a handful of collaborators who keep coming back to you and support your whole career. Going to film school is a good way to meet directors who you can work your way up with. Assisting a composer/ helping out on projects is also a good way to get experience.

Ultimately, getting that gig is still down to your music connecting with someone.

What's your process for composing?

It depends how early I can get onto a project. Sometimes I've written ideas based on reading the script, but more often it's responding to early assemblies of the picture, taking on-board the director and editor's ideas and temp tracks to come up with something original for the show. It's great to get early ideas into the cut, as it starts to become part of the show and gives it a tone that everyone gets used to. As opposed to chasing a temp that everyone's already fallen in love with.


What composers do you look to for inspiration?

I don't get enough time to listen to music properly – it's always when I'm looking for a kick-off point. So with The Durrells, I was listening to Morricone, Nino Rota and Sam Lee. Classical music is also a great source for some inspiration.

What is the biggest thing you’ve learned during your time as a composer?

The 20 minute rule: if you haven't cracked the basic idea in 20 minutes, then you're going down the wrong path. I've spent days bashing my head against the wall, going crazy trying to find the idea – then sat down, thought about how it could be really simple and done it really quickly. I've learned that the best ideas are often really simple.

How important were your studies at Cambridge University and The Royal Academy of Music in terms of leading you into your career path? Do you feel music education is key to becoming a working composer?

I studied music composition with Cyril Lloyd at the Academy from age 16-18 and loved it. Cy was inspiring, the musicians were brilliant, there was a great atmosphere and pieces were regularly performed in workshops. Cambridge was a different ball game. I found the composition angle too rigid and inaccessible: film music and anything post-1950 that no one knew anything about. However there were loads of opportunities outside of the course.

I think there are many different ways to get into this, and although the nuts and bolts of composing are useful tools, it's more about your imagination and ideas and having an instinct with what works well to picture. You can always find people to help with the areas where you feel less comfortable.

What are you working on right now, can you tell us more about it?

I'm working on The Bodyguard – a six part thriller by Jed Mercurio. It’s dark, tense and psychological which is exciting to score. Musically, I'm looking to create something outside of any thriller clichés, to score what is smouldering inside the Bodyguard's head. It’s somewhere in between synths and instruments.

I love synths that sound organic and the other way around. I love sounds where you don't know what it is; it just creates a feeling or atmosphere. Creating sound that’s recorded specially for the project rather than using samples is something I love to do. It helps give the show an identity.