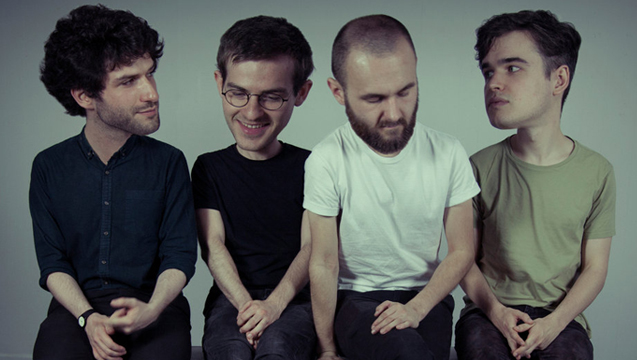 We caught up with sprawling jazz ensemble Robocobra Quartet - one of the most eclectic, unhinged and boisterous acts in the jazz world right now.

Sprawling jazz ensemble Robocobra Quartet have cultivated a striking presence as one of the most eclectic, unhinged and boisterous acts in the jazz world.

A cocktail of post-punk, jazz, spoken word and noise rock - their sparse post-everything sound isn't for the faint hearted, but proves intoxicating and effervescent for those brave enough to jump in.

Now with an interchangeable cast of up to 10 players, the band have spent the two years since the release of their debut album mastering a sound that puts menacing sax, shouty vocals and rangy rhythms at its core.

Following the release of their second full length album earlier this year, a further exploration into their marriage of jazz and punk, we caught up with band leader Chris to try and unravel the enigma that is Robocobra Quartet.

You have a sprawling ensemble of musicians; how did the core members of the band get together?

It’s not that there’s any master plan of ‘lets get this huge group together’- it’s just that’s it’s more flexible that way. You get people based on availability and interest, they can just hop in and hop out again.

But we got together in Belfast, the genesis of it was at a place called the Sonic Arts Research Centre in Belfast – it’s connected to the university and it’s a place you can study electronics or acoustics and performance.

With such an eclectic blend of musical influences, where do you take your main inspiration from?

I think it’s just kind of unfiltered. There’s not much conscious stuff going on, it’s more just whatever comes out.

It’s a more natural way of writing. Sometimes bands come along and say ‘I’m going to sound like these guys’ and it’s tiring. It’s kitschy to hear a band that are trying to sound like someone else.

Can you talk me through your writing process?

It’s interesting because a lot of the writing is kind of tied in with the production and the recording process. It’s usually myself who has the original ideas for the new tune, but there’s certain parts where it’s your job as a composer to say 'that’s exactly what I want', but then if you know who you’re working with, it helps to be like, ‘I know I want this much left open’.

If you leave it malleable you’re able to drop out a chorus, or swap out a section, or add this and add that based on what’s happening in the room. If someone comes up with a cool idea, then why don’t we bend the song to that instead of saying ‘the song is finished how it is’.

One thing I’ve learned from working with other bands is if people are married to their ideas it can be a really bad thing, what you have in your mind might sound different on the day.

How would you describe your sound in 3 or 4 words to people who have never heard you before?

There was a review that came out once that said ‘Fugazi meets Mingus’. It’s a blend between the Jazz thing and the Punk thing, and that seems to always pop up.

What was the driving inspiration behind the latest album?

It’s funny, you only realise in hindsight sometimes what these things are actually about. But I noticed a lot of the lyrics were about cars – I was in a pretty serious car crash when I was young, and I’ve noticed a lot of my lyrics are about that.

In some ways that was something I noticed popping through. A lot of lyrics can flop around between songs though, it’s not linear. As a central influence though, there’s a lot of looking back on growing up, there’s parts of self-reflection I guess. That sounds kind of cliched.

How do people normally react to hearing you for the first time?

We try to keep a humour about it because sometimes people’s perception is that this is very serious music – maybe there’s a pretension about it or something. I think it’s important to have a humour, if you see us live there might very intense and aggressive or emotional parts, but I tend to chat quite casually in-between and make jokes. I think it disarms people.

We take the music really seriously, but don’t take ourselves too seriously.

What tends to happen is you’ll get people who are really into it - there’s very little in the way of casual audiences. It’s either ‘this is not for me’ or ‘I’m going to have to tell everyone I know about this’.

Can you tell us about the best gig you’ve ever played before?

We’ve had two recent one’s that were absolute treats. We did a festival in the Netherlands called Into the Great Wide Open, and it’s kind of your European boutique festival but on an island. It’s one of the first European festivals we played and we were like ‘What? People treat bands this well?’.

We finished our sound check and the organiser said ‘we need to finish up, doors are about to open’ - we still think we’re in a punk band so we were like ‘yeah sure the doors are going to open for all the people who are going to turn up early’ but suddenly a massive audience turns up and is with it for the whole thing. It was wild to see people who are just there to see what you’ve got.

The other show was The Great Escape. We played The Hope and Ruin in Brighton and for some reason that show was just magical. Everyone was just there for it and wanted to make it good.

We play all sorts of weird shit. We’ll play an arts centre then a jazz club or a punk venue one after the other in the same tour, so it’s quite a rollercoaster.

One time we played an Irish festival and we must have travelled five hours to get this ferry from Ireland, we showed up and the weather was terrible, so we played the first slot of the first day of the festival and immediately got the ferry home. It was the most boring one, because nothing happened.

We’ve played in anarchist centres before, where people are used to formalised punk, they know what punk music is and they’re very upset that we have a saxophone.

We’ve been listening to Tim Hecker, it’s very noisy but very ambient. I put it on in the van and we all fell asleep, almost including the driver.

I’ve been listening to a shit load of a band called Horse Lords from Baltimore, and Kula Shaker – they’re just fucking sick.

What would your advice be for emerging artists who are just starting out in the industry?

I’m not massively in the business of giving advice because I think there’s so much in life you have to learn for yourself, so I generally think it’s better for people to figure things out.

But for me I think it makes sense to take absolute joy in everything you do – do something because you love to do it. In music it’s such a hard route to success and if you’re doing a lot of things you hate because you want the end goal, you’ll probably never get there.

If you always do the stuff that excites you then you’re succeeding. But I think that’s something you need to figure out for yourself – but if you’d have told me that I probably wouldn’t have listened!