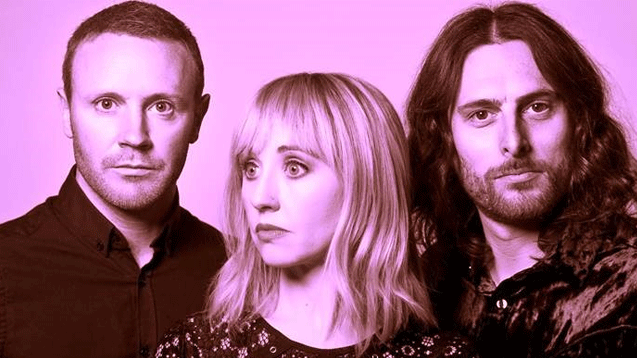 ‘You don’t last 10 years making alternative guitar music in this day and age unless you really fucking love it' Ritzy Bryan on the trials and tribulations of band life, and the ace new LP...

‘You don’t last 10 years making alternative guitar music in this day and age unless you really fucking love it. It has to be the thing that keeps you grounded, keeps you wanting to do it,’ says Ritzy Bryan, songwriter and frontwoman of Welsh noise-pop trio The Joy Formidable.

She’s looking back on a tricky year or two for the band, as they reassessed their musical motivations and grappled with the personal and business issues which nearly derailed them.

Finding solace in sound, they returned to the studio to deliver AAARTH, their fourth studio LP, which lands next Friday (28 September).

With its howling reverb-blasted guitars, pop highs and unanchored energy, it promises to be one of their most vital releases yet.

To support its release, the band are doing a string of in-stores at Spillers in Cardiff and Rough Trade in Bristol, London and Nottingham (dates below).

The mini-tour follows a busy summer of live shows, including sets at Robert Smith’s Meltdown Festival, and main stage appearances at Reading/Leeds Festivals.

This week, they’re currently trekking their way across the US and Canada in support of Foo Fighters, armed with their arsenal of new material.

Before they set off, we chatted to Ritzy to get take on the year that nearly broke the band and learn how they’ve managed to come back stronger than ever…

Well, we’re getting busy again and we’ve been really looking forward to gigging again. This was probably the longest time we’ve had away from playing live. When we did Meltdown, it had been a whole year since we’d done a show, which is very unusual for us. We’ve been absolutely screaming to get back out there again.

How do you prepare for touring?

I get very excited, and very busy, mentally, especially with the new album on the way. We’re excited about coming back with not just the new material, but also a new feeling to the old songs, the set, the live experience.

As a band, we’re not content just being comfortable. We always like to think, ‘Where are we at musically? What do we want to explore with these songs in this set?’

What’s the thinking behind the new album, AAARTH?

Well, we had a different approach with the last album, Hitch, which was very much about the chemistry between the three of us, and the performance side of things.

With AAARTH, we felt like fucking about a little bit more. There’s more of a collage approach, and that follows through in the instrumentation and the lyrics.

I see it as a little bit of a reaction to Hitch; we wanted to record in a different way, and we wanted the production and the recording sessions to feel different.

We were all feeling at a low point before we went into the sessions. Rhydian had some stuff happen to him, and he came to live with me, and we were reminiscing about the year we just had. We knew we needed to try out something different.

We had that conversation: ‘Do we want to take a breather? Do we feel like we’re ready to make another album? Do we want to be together? Does everybody need to sort themselves out a little bit before we carry on?’

Instead, we decided to release ourselves into something very experimental and colourful, and it was almost like we didn’t give a fuck. We always cared about the music, but if we’d ever had any inhibitions to get together, all the walls came down even more.

We decided that none of this process should feel sapping in any way. It should be the antithesis to everything else that’s going on. And AAARTH is what came out.

What was influencing you at the time?

Like I said, there was a real moment of reflection. We’ve always been very tight as a unit, and music added extra beauty to the chemistry and the family vibe. I think we felt like we’ve been through the wringer from a lot of different elements.

We had a really horrible experience with our last label, and the way the album was released. We didn’t have a particularly easy last tour, we’ve had a lot go wrong. You know, your personal life is falling apart because you’re away from home a lot, and it can be quite difficult to juggle everything.

It felt difficult to ask, ‘Are we still happy making music?’ because our identities were all about music making us feel really good. You don’t last 10 years making alternative guitar music in this day and age unless you really fucking love it. It has to be the thing that keeps you grounded, keeps you wanting to do it.

What was the hardest part?

Well, I always thought that no matter what happens, I didn’t want to be, 10 years down the line, falling out or bitter. That band dynamic has taken some of our peers somewhere they didn’t want to go.

But I think, for me, there is an element at the start of the recording process where the tenacity kicks in. I thought, ‘Fuck that. I’m not being a casualty of all of this.’ I love music, I love writing, this is exactly who I am. I want to make something beautiful, and exciting, and with lots of energy, and feel alive again through this process.

What have you learned about keeping on going?

There are some chapters of your life where it feels that you get a lot thrown at you, and it’s an instant learning curve. A lot happened in the year before the album and I feel like I’ve come out of it with a lot more insight.

Ten years into it, you think you’re becoming savvy and wise to this business, then you realise you’ve still got a lot to learn. It’s a really interesting time for independent music. We’ve seen a lot change, in terms of social media and releasing records, and also in how music has been devalued.

It’s positive we’re still able to share music and get it out there. But we’ve definitely seen a lot of twists and turns, and I feel constantly conflicted because I see some things happening, and I think, ‘Well, fucking hell, how do you even make a living out of this anymore?’ It just feels like the bottom has been taken out for artists in some way. I do see a lot of positives too: sometimes, great art comes from a little bit of a struggle.

There are so many complications! I suppose that’s why it is so crucial to ask yourself whether you’re still loving music and enjoying it, and whether the songs you’re writing still feel like your greatest work in that moment. You need that anchor because, I won’t lie, some of the stuff on the periphery of making an album, releasing it, trying to not get fucked over, trying to make some level of a living that feels fair for the amount of love and effort that you’re putting in to it, feels very fucking askew.

AAARTH is released on 28 September. Pre-order it here.