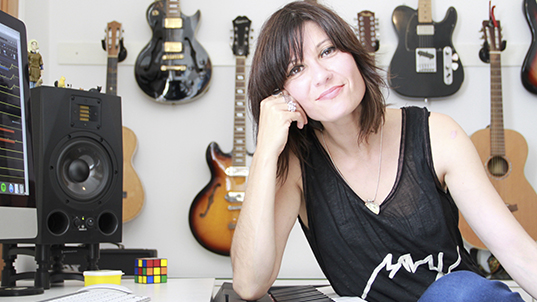 ‘There is a lot of creative freedom in writing library music.' We chat to composer and multi-instrumentalist Justine Barker about the processes and creative rewards of working within the genre.

‘There is a lot of creative freedom in writing library music - as pretty much all markets are catered for, I can concentrate on the kind of music I enjoy making,’ says composer and multi-instrumentalist Justine Barker.

Thus far Barker has spent a sizable part of her career on a genre of music that largely leaves its makers' talents unsung, but the behind-the-scenes nature of her work didn’t prevent her from scooping the Best Composer at Underwire Film Festival in 2016.

Her current projects include scoring the latest season of Casualty and music for the brand-new Acorn TV drama London Kills. Alongside her TV and film work she also produces lyrical songs and instrumental music for production libraries.

For many years the shrouded world of library music and its often-anonymous makers has been treated with little reverence, but the tide is starting to turn.

Contemporary labels like Ninja Tune have launched a Production Music division, and new talent like Barker add to library music’s rich history built on the work of composers like Alan Hawkshaw and Brian Bennett.

‘The majority of the general public have no idea what library music even is, but it’s a huge part of pop culture; it’s the soundtrack to many of our lives,’ says composer and HutTwenty9 documentary maker Paul Elliott, who has made a new film about the genre.

Elliott’s conviction in the genre and its creators is supported by the iconic work of Hawkshaw and Bennett, from the former’s Grange Hill theme tune to latter’s work being sampled by Nas and Drake.

As a composer, what is the attraction of writing library music/production music?

There is a lot of creative freedom in writing library music - as pretty much all markets are catered for, I can concentrate on the kind of music I enjoy making. It’s a great opportunity to experiment with genres and styles and with every project I work on, I always learn something new so to keep on creating is to keep improving and expanding my knowledge.
Aside from the creativity, there are good financial benefits too. Once the work is done, it can potentially keep earning you royalties for years. Finally, if I’m doing my own album, there is a reasonably flexible schedule so I can fit it around my other TV and film projects.

How do you approach the creative process when working in this musical world - is it different to how you would approach another project?

When I’m scoring drama, I’m always working to picture so the story completely informs my approach and I have to be mindful of dialogue, but with library music, aside from the general style that I’ve decided on, it’s pretty much a blank canvas. When I am writing a library track, I usually play some visuals alongside to see that they work together. I also write tracks that have easy edit points so that they can be cut down or looped as desired by an editor when being used in a production.

How does the process work in terms of winning library music work? Do you approach libraries or vice versa?

It’s actually a bit of both. Initially I approached music libraries by sending them examples of my work and some of them got back to me and asked me to submit tracks for certain albums. In my experience, the libraries produce a quarterly list of albums planned for release and composers can register their interest to submit tracks. I think some libraries are also very interested in being approached by artists/ composers with full albums ready to go. With my Sci-Fi album for Bosworth, it is a genre I am very interested in but haven’t really had the opportunity to explore before – when I mentioned it to Louisa Rainbird at Music Sales we thought it would be a great project for the Bosworth library, which Music Sales own.

There seems to be a real resurgence in interest in the worlds of production music and library music - why do you think this is?

There used to be a preconception that library music was a bit naff but I think the standard has dramatically improved in the past 5 or 10 years. Great works are being made by a wide variety of artists of all genres and as so much content is being made now for streaming, online etc in addition to traditional media formats, there are definitely more opportunities for music.

For any composers looking to break into this area, what would you advise them?

Look up libraries online and see if you have something to bring them which may not already exist in their roster of composers. Do your homework when approaching libraries as they get hundreds of submissions every day. Definitely do not compose a standard email and copy it to all and sundry! Co-writes can be a good way to work with a library that don’t know you so if you can buddy up with an artist that already writes for them, that may get your foot in the door.

Do you have any inspirational composers working within library/production music worlds? If so, who?

It can be hard to know as library music composers are usually uncredited on shows so as a viewer it’s unlikely you will know who has written that wonderful piece of music you really enjoyed.

That said, I’ve been really inspired by Bear McCreary, particularly his outstanding score for Battlestar Galactica which completely captivated me and I’m a big fan of Ramin Djawadi and love his music on Westworld. Both these composers have library albums available which are, as you’d expect, of the highest quality.

What projects are keeping you busy/what do you have lined up in the future?

I’ve just completed a brand new crime drama called London Kills commissioned by Acorn TV and currently I’m scoring the latest season of Casualty for the BBC. I’ve got some great ideas for new library albums so I’ll be getting started on them early next year.
Features