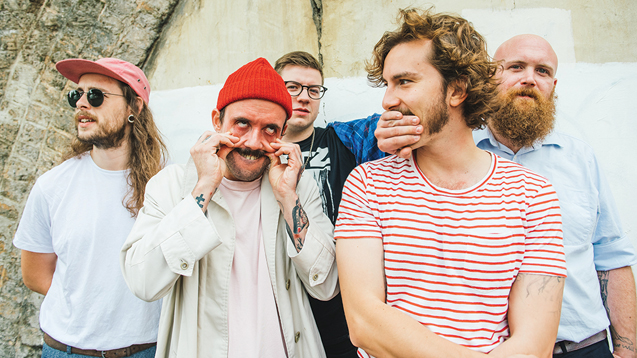 ‘You’re no one until you’ve supported Foo Fighters or been on X Factor,’ says IDLES’ frontman Joe Talbot with a sardonic smile. He’s considering ‘band goals’ with guitarist Mark ‘BoBo’ Bowen, and chat veers towards Simon Cowell and his steely grip on British music tastes.

It’s the end of a crazy year for the band, which, sure enough, included an opening slot for Dave Grohl and his gang at the O2 Arena in London. Unsurprisingly, a turn on Cowell's talent show has so far proved more elusive.

Joe slaps his head and rolls his eyes. ‘In normal life, everyone says, “Oh, you’re in a band, have you been on X Factor?” I say, “No, look at me, you fucking weirdo! I’ve not been on X Factor. Listen to me, what the fuck is wrong with you?”’ You can see his point. Joe is dressed head to toe in ripped and faded black, his bleached hair is cropped close, and behind those specs is a wild look which suggests total depravity.

‘I never considered myself having goals until just this moment - but this is it!’ Mark chips in, his whiskers all abristle. ‘Let’s do our next album live on X Factor!’

‘Only if we can call it Sophomore and fucking nail that Showaddywaddy sound we’re going for, yeah?’ counters Joe.

We’re supping pints at the Old Blue Last, a pub just around the corner from tonight’s gig, and the banter is flowing freely. Yesterday it was Tunbridge Wells, today it’s London’s East End, and tomorrow? The first leg of an 11-date European tour. It’s all happening for IDLES.

Their smash and grab on British music in 2017 has been chaotic, charismatic and completely justified. The band have been grafting hard for eight years, self-releasing EPs, financing their own tours and sharpening their sound far away from the glare of the industry spotlight. Then, in March, everything changed.

Tracks like Well Done and Mother, with their sideways swipe at austerity Britain, class inequality and sexual violence, tapped into our society’s growing disillusionment. Across 42 minutes of concise carnage, the band’s anger buzzs with anarchist exhilaration, reminding us just how potent proper punk can be.

‘The world is all a bit weird at the moment,’ Joe offers. ‘No one really knows who to believe in or what’s going on. People don’t trust money anymore, they don’t trust God, they don’t trust the government. As an artist, whose corner do you fight if there are no corners left and everything is a big fucking mess?’

It’s a rhetorical question that IDLES have answered with wave on wave of musical realism which they’ve whittled away to its simplest form. Lo-fi bass, drums, guitars and railing lyrics: a primal response to rampant capitalism, ‘shit pop and bigoted bullshit’.

‘I don’t really enjoy people who preach about their political standpoint and I don’t like zealots,’ says Mark. ‘I feel a certain political way, but I get on with it. It’s how I interact with people, how I work my job… It’s not for me to go, “Oi, listen up.”’

For IDLES, music is therapy: everything feels looser once they’ve exorcised their demons on stage and on wax. ‘We’ve become less angry because our music has become more purposeful and aggressive,’ says Joe, as we skirt around his few years in the wilderness, when he lost his mum and life swerved out of control.

‘I think a lot of people misconstrue purposefulness, drive and aggressiveness in music as anger. It’s not the same thing. If you look at the people in our audiences, they’re always smiling. They’re going for it.’

As the music gets increasingly hostile, IDLES become gladder. Meanwhile down in the mosh pit, the fans are, literally, jumping for joy. 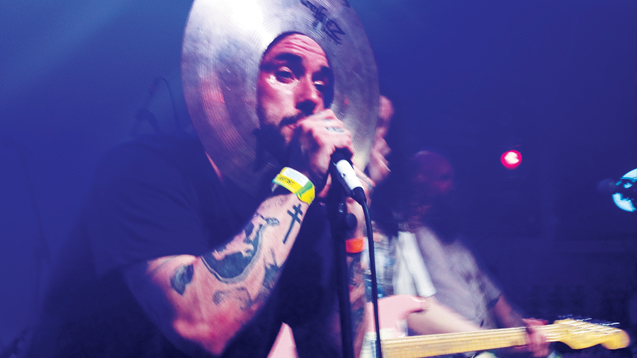 Search IDLES across social media and you’ll find the #allislove tag everywhere. It’s favoured by the AF Gang, a loose collective linked by Facebook, who rose up earlier this year to organise IRL meet-ups at gigs. They also go to see other acts endorsed by the band, like Protomartyr and DUDS.

‘It’s one of the most amazing things to happen this year,’ says Mark. ‘These people are our friends now. They’re even getting together to come and watch us play in Hamburg. It’s amazing that we’re a vector for all of this.’

‘We’re trying to encourage emotion,’ Joe adds. ‘Nowadays, with such a violent society, I think the easiest way to get that emotion is to really fucking push people. But our message isn’t hate or anger and I’m glad people get it.’

Outside the sold-out London venue, an excited crowd is brewing. Some faces familiar to the band begin queuing inside by the merch stand, chatting to bassist Adam Devonshire, who says he feels ‘lost’ when he’s not out there mingling with fans/friends.

One of IDLES’ long-time girlfriends is having a cigarette in the smoking section, while the band’s other guitarist Lee Kiernan stands nearby, talking to more fans about train sets. ‘They’ve always played live so much, but it’s only just getting this manic,’ the girlfriend says, waving her hand around the throng.

‘Often it’d be to a room of 10 people, and I’d get pissed off. Why does my boyfriend want to do that rather than hang out with me? Now I get it. Although sometimes I feel like [Mick Jagger’s old girlfriend] Marianne Faithfull!’

While IDLES have obviously wooed an army of music fans hungry for honesty, they’ve also charmed the pants off the industry too, with early support from broadcasting veteran Steve Lamacq (‘Lord Lammo’ to IDLES) helping no end.

Since getting airplay on his BBC Radio 6 Music show, they’ve won the Best Live Act Award from the Association of Independent Festivals, scored funding from PRS Foundation to play the BBC showcase at South by South West 2017, performed at PRS for Music Presents and found their way onto a clutch of year-end Best Albums lists. 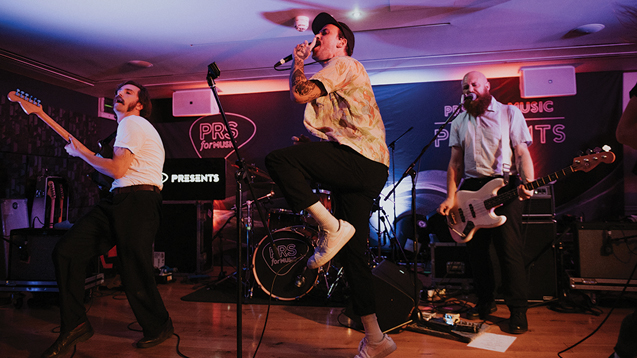 It’s showtime and IDLES run on stage, dressed all in white. They’ll be wearing these outfits – unwashed – for the rest of the tour. Joe looks out across the crowd. This could be the largest headline show they’ve done yet. ‘We haven’t got bigger, you have,’ he shouts. ‘Thanks everyone, it means a lot.’

There’s plenty of ramped-up testosterone in the mosh pit as massive blokes jump over the barriers and crash into one another. But they’re also holding out a hand to anyone who falls over. Mayhem is woven into the DNA of IDLES’ live shows, encouraged by the band’s on-stage antics. But none of it ever bubbles over into unpleasantness, maybe because Joe always delivers a short sermon on inclusivity and love for all.

‘I think the nature of our music is open-minded,’ he says. ‘What I’ve witnessed at all our gigs is that anyone, fucking anyone, is welcome. No one feels like they should act a certain way or look a certain way – and I think that just comes from us being ourselves.’

Before the end of 2017, the band announced some massive gigs next April at G2 in Glasgow, Gorilla in Manchester and Heaven in London, with the latter two selling out five months before the shows. Momentum is obviously building fast, but how will it impact the good vibes?

‘If you’re a realist and you’re a musician, the more popular you are the more opportunity you have to play more – so of course we want to be popular,’ Joe figures.

Although he doesn’t like playing to massive crowds because he wants to ‘be able to see the eyes of the person at the back’, it’s not going to stop him on his path. ‘If we write shit songs then no one will come to see us and we won’t be able to do it anymore. We don’t want that,’ he says.

Once IDLES finish their European tour, they’ll be holed up in a studio in rural Wales to record their second album with producer Paul Frazer (aka Space). They’ve already been airing new tracks Samaritans, Alcohol and Rottweiler live, and with a focus on capturing their on-stage sound, what could go possibly go wrong?

‘I think a lot of bands put pressure on themselves to be successful, but they forget what success is,’ says Joe. Your fertility increases when you’re not worrying about conceiving, he explains, using his long-term relationship, and subsequent fatherhood, as an analogy. ‘Your body is an organism, it’s an open temple,’ he adds, with a completely straight face.

IDLES have obviously incubated for long enough now and are completely relaxed in their own skin. Says Joe: ‘At the end of the day, it’s an album, and just because the songs will be permanently on record, it doesn’t mean that mistakes shouldn’t be there. We’re not perfect. It isn’t perfect, nothing’s perfect.’

‘Our X Factor debut will be perfect though,’ Mark pipes up. ‘We’ll be all Kate Bush in leotards and the judges will love us. We can play the second album – you know, those new songs which sound like IDLES but are played in the style of Showaddywaddy?’

And on that note, conversation turns back to Simon Cowell…
Features