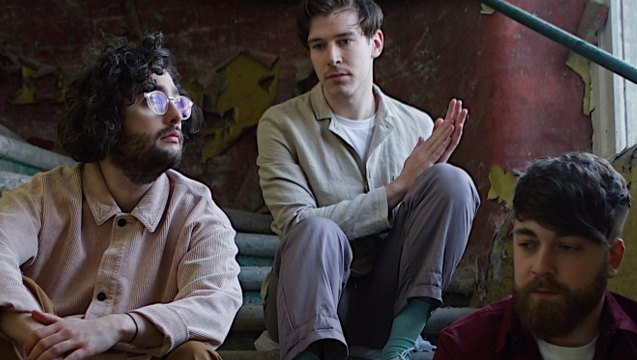 Ahead of a sold out show on a 30 degree day in Edinburgh, we caught up with Kilmarnocks finest musical export, Fatherson.

As we caught up with them they were on the road again, heading off to play a sold out show at Edinburgh's Sneaky Pete's in honour of the release of latest single Making Waves, taken from upcoming third album, Sum Of All Your Parts.

It was supposed to be hot - 30 degrees on the outside of the venue 'hot'. And with 100+ expected to cram into the 60 capacity venue, Ross from the band was preparing for a long sticky night when we spoke...

My first time making music was when I was a wee guy, probably about 10 years old. I started playing with the boys and we just learned how to make music together. We were 12 or 13 and we’ve pretty much played with each other ever since.

I had a guitar, Mark had a guitar and Greg had a drum kit and that was us, we just started playing together and never really stopped.

When did you realise there was something in it?

I think the first time you realise it’s going well is when you sell some tickets. We’ve always done well in Kilmarnock, but as soon as we started selling tickets in places we’ve never been to, we realised we were probably doing something that was alright.

Can you tell us a little bit about new track Making Waves?

It’s pretty laid bare. It’s just about finding yourself in a relationship and with a person that’s actually pretty good for you, for a change, and it’s about trying to hold on to that. It’s my take on it.

Is it based on real life events then?

I think everything should be, if you start writing songs about something you have no idea about then they won’t be believable.

Originally, we built a studio in Glasgow and we lived in that for around nine months. We got everything finalised in Glasgow before going to The Chairworks in Castleford. We recorded the whole track in sequence and we did it live – so it took a couple of days until we got there but it was really cool, it was an interesting thing to do.

Do you think this approach effects the final outcome?

I think so, I think we were almost of the opinion before we got that studio that we’d never be able to record a ‘live’ album. I think most people shit the bed with it because everyone records multitrack nowadays.

Is a jam session your usual writing process?

To be honest it changes all the time, and I think that’s what keeps it fun. There’s a vast tapestry of ways to do it, but things that end up feeling the best usually happen in the moment.

How do you think your style has changes throughout your releases?

I think with the first record, you just are quite happy that you managed to write some songs and that somebody gave you the opportunity to write an album. With the second album you kind of shit yourself because there’s a little bit more riding on it, the goalposts have moved a little bit.

Now we’re at a point where we want to make cool music with each other. We haven’t achieved everything we want to achieve, don’t get me wrong, but we’ve shed that anxiety of ‘will people like this’. I’d say this is the most confident album we’ve ever made.

What have you taken away from music so far?

Just make music that you want to, as long as you’re enjoying it and you get to make a bit of money and hang out with your friends – it’s an absolute cakewalk, I pinch myself every day because I just get to play in a band in a band with my pals as a job. And for as long as I can do that, I’m going to enjoy it.

I think that’s it; just chill out a bit because things happen how they happen, you might as well enjoy the journey.

I’ve been listened to SZA, her album is fucking outstanding, and a girl called Noname from Chicago. I can’t stop listening to Sorry Not Sorry by Demi Levato, that’s my pure guilty pleasure.

I pretty much only listen to female hip-hop, rap or grunge – I don’t listen to dudes doing anything, actually. Going into the world with your cock forward is pathetic, and I think that falls into every genre, it’s a bit exhausting.

Best venue we’ve ever played is a place called the Dalhalla in Sweden, it’s like a natural amphitheatre built into a limestone quarry, and the backstage is a lagoon with a geyser in it. It’s the coolest place I’ve ever played in my life.

Best show we’ve ever played, was the King Tut’s Stage at T in the Park, 2014. They told us the stage was going to be way too big for us and that we’d never fill the tent, but there was 10,000 people there, so…

What you advice be for emerging artists in the industry?

Try to become friends with people at Spotify. Get a million plays behind you from New Music Friday, get a bit of money from that and then go out on the road.

The landscape has totally changed, if you manage to end up with even 250,000 plays you’re going to make more money than most of your favourite bands did with their first record deal.

What keeps you motivated?

Think about talking to your fourteen-year-old self and saying ‘in ten years’ time, this is what your going to be doing’.

Some days its shit, don’t get me wrong. As much as everyone say’s you’ve got the best job in the world, sometimes it’s a shit job, but most of the time it’s an incredible job. When you finally get to do this as a living it’s a blessing.
Features