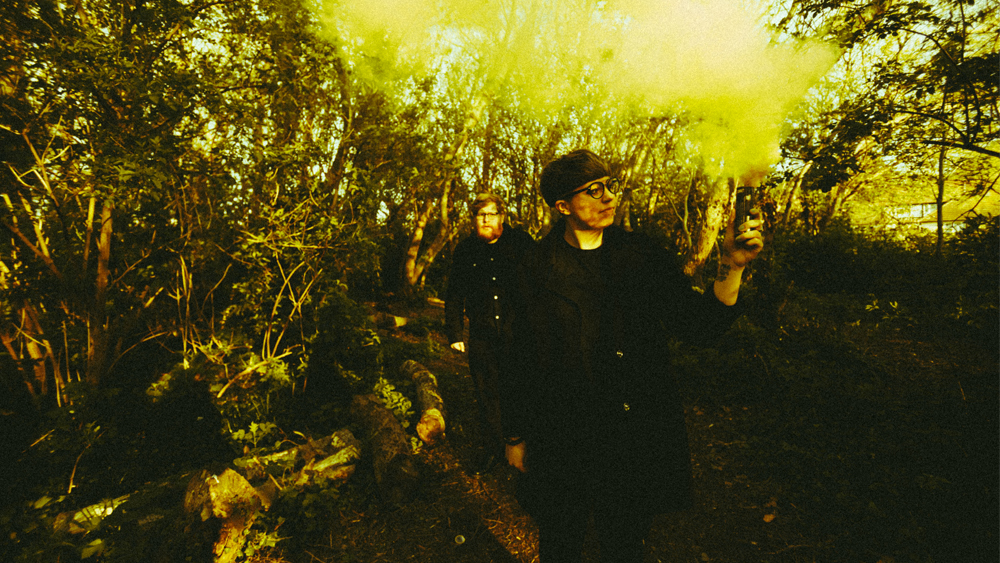 ‘We've directly watched political issues affect people we know and love and change our world. It's really hard to ignore that': Cultdreams on reflect on how the outside world affected their latest record.

Since their formation in 2014, Lucinda and Conor Dawson, then known as Kamikaze Girls, have rarely shied away from difficult issues and plain speaking.

The duo’s 2017 debut LP was a raw and defiant exploration of matters like mental illness and misogyny, which saw the band take musical cues from riot grrrl rebellion and pop melodies.

Following the record’s release, the band undertook a punishing tour schedule and Conor moved to Belgium leading to a near two-year gap in recording and a revised process for writing songs.

Rather than sparking new compositions with jamming sessions, Lucinda and Conor began their new record remotely, passing back demos back and forth via the internet.

The recording process also marked change in the band’s approach, as they undertook a more leisurely pace in the studio than their previous record allowed.

The resulting collection bears the hallmarks of these developments in its more ambitious and often soaring sound, which also retains their punk fire.

Their skin shedding was fully realised earlier this year with a name change to Cultdreams, signalling this new chapter in the band’s story.

Here, we chat to Lucinda about the duo’s evolution and what drives their political engagement…

How did you start making music together?

We met in Leeds in 2007, Conor was doing sound at an instore my band was playing, and after that our bands played together a few times. Both of our bands at the time naturally came to an end, and I moved to Leeds in 2008 — we started a band in October 2009. It's not the same band as Cultdreams, but it will be 10 years in October that we've been playing music together which is crazy to think it's been that long.

Who or what are your biggest influences?

When we first started out as a two-piece, we were heavily influenced by riot grrrl, punk and fuzzy shoegaze and grunge – bands like Sonic Youth, The Cure, Echo & The Bunnymen, Bikini Kill and L7. We both listen to quite a broad spectrum of music, but those are the ones that we both love and take a lot of our inspiration from.

What’s the thinking behind your latest record Things That Hurt?

It's a record about grief and loss, on a personal level and a political one. It's very reflective, which I didn't really realise until it was done and I listened to it as a whole for the first time. I spent a lot of time thinking about how I've changed as a person over the last few years of touring, and how things in my life and things in the world have affected me and the people close to me over time.

We spent so much time on the road since 2016, we were in Brussels during terrorist attacks, we were in the US during the presidential election results, we crossed borders into Europe the day of the Brexit vote results. It's been a really strange few years, and it's affected both of us in different ways.

The album marks not only a name change but a more expansive sound. What inspired those changes?

We decided to change the name back in March. We thought it was a good time to do it as we were in between records and not touring, and I think subconsciously because the album was already written at that point, we picked a name that matched the sound of the record. SAD and Seafoam were definitely a lot more scrappy and punk, whereas on Things That Hurt we've explored our shoegaze / lo-fi side a little more. It's still very raw, and very angsty, but it's also a lot more melodic and we're really happy with the direction it went in.

The single We Never Rest features Katie and David from The World Is A Beautiful Place and I Am No Longer Afraid To Die. How did that collaboration come about?

We've known TWIABP for maybe five or six years. The first time they toured the UK we supported them in Manchester. We stayed in touch, they came out to see us play in Philadelphia and eventually we ended up touring together for a month last year in the UK and Europe. We became good friends and they're wonderful people. When I wrote We Never Rest the structure of the song was unconventional, and a lot of the spoken word parts in the verses ran into the choruses and I realised it would be a great fit for some guest vocals. I thought of David and Katie straight away as they could do the higher and lower octave together and they both have such great voices. I was terrified about asking them in case they didn't like the song but luckily, they loved it and said yes straight away. I hope we get to do it live someday.

Lyrically your music is very candid, and it delves into socio-political issues. How important is it to you that your music enters a wider discourse?

My lyrics have always been quite frank and to the point. I'm not really big into metaphors, and I like to find ways of saying things as sincerely as I can. I appreciate not all bands want to sing and write about political and social issues, and not all listeners want to hear it, but to me, it's always felt important to be socially conscious of what's going on around me. I think a few years ago I used to shy away from political issues because I felt uneducated about it, but I finally started to pay more attention to what was going on in the world, and I guess you can almost hear that develop across the three records we've put out. So from the point of view that I was paying attention, it felt important to vocalise how I felt and what I was seeing. As I said before, we've spent a lot of time on the road seeing these things happen and unfold right in front of us, we've directly watched political issues affect people we know and love and change our world. It's really hard to ignore that.

Can you tell us a little about your approach to writing songs?

A lot of it starts with guitars for us. Conor and I will write little ideas and throw them back and forth between us. We don't get a lot of time to jam in person as we're either on tour or when we're not we live in separate countries. I tend to map these ideas into songs and create structures and lyrics from there. Other times I'll just write by myself, so we don't have a set approach.

For this album, it was a lot of throwing ideas back and forth via Dropbox. I had been wanting to write all year, but I had been touring a lot and often when I was home I didn't feel like it, I lost my spark for a bit I guess. At the end of 2018, I came off tour with my other band Nervus, it was Christmas, I had no plans and I just sat down and started writing. The record came together in about three months and some days I was sending Conor a couple of songs and some days I wasn't producing anything of substance, so I'd just get up the next day and start again.

Of the new tracks on the album, do you have a favourite?

I think Born An Underdog, Still Living One and Don't Let Them Tell You Otherwise are two of my favourites. Neither of them sound like what you would typically expect from us, but I really like that we have these on the record and I hope people enjoy them. I have this weird thing about opening songs on albums. All of my favourite records have such strong opening tracks, and in my head, I wanted a really explosive fast typical CD track to open the album, but then I wrote Born An Underdog and sent it to Conor and he was like, 'Well that's an opener isn't it...' I'm really excited to play that one live eventually.

What’s your take on the UK’s music scene currently?

I think it's thriving. I think the last two to three years have been awesome. There are so many amazing new bands absolutely smashing it across all different genres and it's really exciting. We're playing Arctangent Festival and I am hugely excited to see Pijn, Conjurer and Ithica. They're all doing amazing things at the moment. I am absolutely in love with the band Kermes too. They're from Leicester and they sound like The Cure on steroids, it's amazing. So many good bands have put records out this year too, we're spoilt for choice.

My favourite record so far this year is Patience by Mannequin Pussy. I haven't been so excited about an album in SO long like I have about this one. Their single Drunk II absolutely flawed me when it came out. I also love Lizzo's most recent record, she can do no wrong. I've also been enjoying new records from Proper, Fresh, La Dispute, and I love the Frightened Rabbit cover album that came out as well – the Manchester Orchestra, Julien Baker and Ben Gibbard covers on there are incredible.

You’ve got a big tour coming up, what can we expect from your live shows?

These are our first headline shows in two years, so we're really excited to get the play the sets we've been wanting to for ages. We've done a lot of support tours and festivals over the last two years which have been amazing, but it's cool to know we have shows coming up that are ours to do what we want to with. We're both really excited to play a lot of the new record as it's quite challenging for us to do live as a two-piece and make it sound huge.

Things That Hurt is out 16 August via Big Scary Monsters.