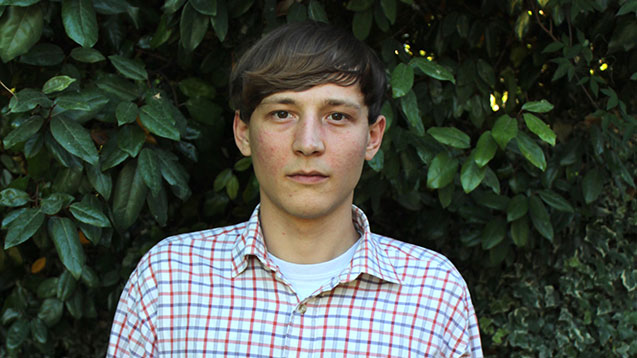 'Most music we are used to hearing is in the standard Western 12-note tuning, so it’s exciting to discover new harmonies': electronic wizz Church Andrews on his syncopated sound...

Church Andrews is Yorkshire-born Kirk Barley, a musical futurist whose throbbing rhythms march to the same beat as SND and Beatrice Dillon.

Dissonant electronics and synthetic melancholy are his stock in trade, as he brings a unique bump and swing to stripped-back techno.

His latest outing, CA1, is a four-track cassette for the Health label which takes you on an algorithmic adventure of stabbing synths and crunching hi-hats. Entirely crafted away from the Western 12-note scale structure, its alien tones sound like nothing else out there.

While not being Church Andrews, Kirk is also behind Accidental Records-signed Bambooman – a purveyor of dusty, organic electronics spanning six EPs and an LP.

Battles - C/BEP, Terry Riley - Shri Camel, and Raymond Scott – Manhattan Research 1 & 2. Have all had a place in my heart since my teenage years. And they still inspire to this day.

Like a lot of musicians, I started playing in bands with friends at school. The most relevant/influential to me was an experimental post-punk band called Fistful Of Yen.

You have explored plenty of different musical ideas over the years – what sort of sounds feel most natural for you to make at the moment?

I've been making lots of organic sounding ambient and minimalist material recently, which is kind of jazzy too, I guess. It’s also very focussed on sound processing, be it on field recordings or say synth sounds.

To contradict this, I've also been making lots of Church Andrews stuff which is entirely digitally synthesised, and quite clinical sounding, and generally more beat focused.

As a whole though, often the music I'm making, is quite minimal in terms of elements/melody. And the ideas and techniques from these side projects, often feed their way into my Bambooman productions at some point.

Your latest venture is a new four-track cassette for Health – can you tell us the thinking behind it?

I wanted to make something from only a few elements that was completely digitally synthesised. As I've found that setting limitations or a syntax for a project really helps interesting ideas come out quickly for me, and in general is pretty fun way of working.

It says on the Soundcloud blurb you used ‘algorithmic composition techniques’ to construct it – can you explain how this method works?

It sounds more technical then it actually is (in this case), for this project it basically means music composed with the aid of computer, as a lot of the patterns I've used are initially generated by chance procedure (or in other words using a random pattern generator). I've built a few MIDI plug ins with in Synthedit to help achieve this.

What kit did you use? We saw mention of ‘intonation tuning systems’ – sounds interesting!

It was all done in Cubase and Ableton using digital synths/vsts. There is not much going on in terms of effects like reverb etc. It’s all fairly basic.

With regards to tuning, on a lot of the synths you can run your own tuning scripts/patches different to the standard western 12-note tuning system. I’ve been working a lot with 12-note Just Intonation tunings in which the frequencies of the notes are related by ratios of small whole numbers. Intervals tuned in this way are called pure or just intervals.

Most music we are used to hearing is in the standard western 12-note tuning, so it’s exciting and refreshing for me to work with different tunings and discover new harmonies and chords that I haven't worked with before. There is also an infinite amount of possible tunings you can work with, so lots to be discovered.

Next up I have a fairly dancefloor focussed 12-inch coming out on Accidental, which includes a banging Herbert remix on the B side.

I also just finished a commission for Nick Luscombe's Musicity project, for which I made a musical response to the building Aldgate Tower (located above Aldgate East tube station). I’ll be debuting the track in a performance there on the 21st of this month.

Then next month I'm headed to play Dimensions Festival in Croatia which I'm really looking forward too.

And as always, I have lots of music on the go. Hopefully there will be another Bambooman record coming early next year. And I've also been working on an ambient album under my own name which will be out perhaps sooner. And the next Church Andrews EP is almost ready too. So, lots to keep me busy!

Do you have any words of wisdom for new producers?

I guess the best bit of advice would be to try to limit yourself with the amount of equipment, sounds and tools you use, and just work with a few things you really like and get to know them really well. There are so many options these days in terms of tools and sounds to work with, it can all be a bit daunting and you can very easy to get lost in it all. And it distracts from the actual music making.

It’s also important to try do your own thing, whatever that is, be true to what really excites you and inspired by the things that really resonate with you, not just the latest trend or whatever.

There’s been loads of really great music coming out, in particular I've been loving what Beatrice Dillon, Elsa Hewitt, Goat (JPN), Rian Treanor and Parris have been doing. I’m also very excited to hear the next Lonnie Holley record when it drops.