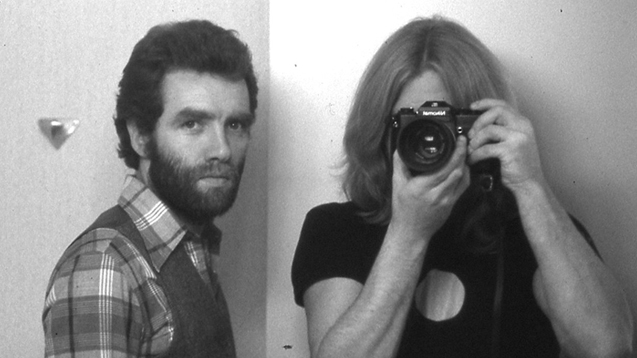 Bob Young is Status Quo’s unofficial fifth member, their roadie, tour manager and harmonica player as well as co-writer on many of the band’s biggest hits with Francis Rossi… we look back at his career and re-issue of his country LP, Back in Quo Country…

Bob Young is Status Quo’s unofficial fifth member, their roadie, tour manager and harmonica player as well as co-writer on many of the band’s biggest hits with Francis Rossi.

Bob is steeped in Quo history, having been a key cog in the mechanics of the group from 1968 until 1981. Throw in some time spent looking after a range of other artists such as Richard Ashcroft and Vanessa-Mae, plus some rock n roll books and he’s well placed to spill the beans on his time in the heart of the biz. With his album, Back in Quo Country getting a recent re-issue by Cherry Red Records, we caught up with him to find out more…

What are your first musical experiences?

In my home town of Basingstoke my Uncle Cliff had a skiffle group and I’d watch him play in the pubs whenever my dad would take me.

He gave me my first guitar and lessons. I knew early on I wanted to try and write songs and I eventually started listening to the likes of Bob Dylan, Leadbelly and as many of the old blues artists I could find.

My teens were spent as an apprentice engineer but I’d try and see many of the artists that regularly came to town. The Who, Animals, Troggs, John Mayall’s Bluesbreakers band with Eric Clapton backing Sonny Boy Williamson - it was an exciting age to live in before technology totally kicked in. I began playing and singing in all the local pubs and clubs while writing songs and poetry and dreaming of travelling the world.

What led you to the music industry?

I think I always knew I’d work in the industry one way or another. On finishing my apprenticeship in 1966 I headed off to Sweden with a plan to hitch-hike through Europe to Yugoslavia. I got as far as Stockholm, met some friends in a band who were living there and stayed with them, paying for rent and food by becoming their roadie and getting my first real taste of the music business. On returning to the UK I immediately moved to London and Notting Hill where I busked every weekend in the Portobello Market to make just enough money to live on.

How did you get involved with Status Quo?

Status Quo were on the 1968 Gene Pitney package tour riding on the back of their hit Pictures Of Matchstick Men and I’d gone along with Amen Corner to the show at the Hammersmith Odeon.

I was standing on the side of the stage during Quo’s sound check and got talking to Francis Rossi. We chatted for a while, got on well and I thought nothing more of it. Two weeks later I was in Nottingham driving the van and equipment for the Herd, a group featuring Peter Frampton.

At the gig I met Quo’s managers as they’d come to offer me a job as the group’s (only) roadie. They offered me £5 more than the £10 Jethro Tull were offering so it was an easy decision. A sliding doors moment that would change my life forever.

Within a year I’d become their tour manager and had also co-written three songs for their 1969 second album Spare Parts. Money got tight and the gigs smaller as the memory of their one hit single faded and they soon became unhappy. They got rid of the management and started being themselves in how they dressed and the music they played.

Francis and I started writing together and on the third album Ma Kelly’s Greasy Spoon in 1970, we contributed five of the ten songs. That album showed the first signs of the direction band was heading in.

What are your fondest memories of being involved with the band?

Well travelling the world with your best mates and making new friends that have lasted a lifetime, it doesn’t come much better than that. Together we experienced record sales, gigs and success that grew to silly huge proportions worldwide and everything good and bad that went with that while learning about the music business and how to keep the road wheels turning. Even in America where we toured a lot in the seventies without any major success had many magic moments. Being in the unique position of tour manager, songwriter and harmonica player for thirteen years with them from 68’ - 81’ set me up for the next chapter outside of that Quo bubble.

Your partnership with Francis Rossi led to many of the band’s biggest hits - what was it that worked so well?

When we first wrote together it felt very comfortable and natural. Throughout the seventies we were together maybe nine or ten months of every year on the road and in the studios and wrote because we wanted to. Some songs such as In My Chair took us no more than half an hour start to finish while others months and sometimes years to sort out. From that period came songs like Down Down, Caroline, Paper Plane and a few dozen others. I’m also very happy that over the years I got to write several songs like Living On An Island and Mystery Song with Rick Parfitt who sadly passed away on Christmas Eve. A big loss…

Seventeen years ago Francis called out of the blue and suggested getting together. We did and we talked for a few months and eventually the writing fell comfortably back into place. I think we’ve since written around forty new songs, many making it onto the last several albums.

Back in Quo Country is being re-issued by Cherry Red - could you explain a little about the record, who you got involved and why?

It’s thirty years since my original In Quo Country album was released and this re-release was suggested by Hugh Gilmour and Steve Hammonds who I knew well and have a great track record with these kinds of releases.

Francis and I have always had a soft spot for country music and a few of our songs had a leaning towards that when we wrote them. It was later when the band recorded them they took on what I guess could be called the ‘Quo sound’. I’d had it in my head for some time that if I ever came off the road with them one of the things I’d do would be put a great band together and record my own album of some of the Quo songs I’d co-written and with more than a nod to the country music I like. With much encouragement from Micky Moody I eventually got into Phonogram studios in Marble Arch with all the players I’d hoped for. Guitarists Micky, Albert Lee and Billy Bremner. On pedal steel BJ Cole, bass Mo Foster, keyboards and violin Graham Preskett and drummer Kokomo’s Terry Stannard.

I don’t think I’m qualified to give advice on actual songwriting other than listen to everything, write with others you’re comfortable with and don’t be limited to any one style. To all writers I’d say make sure your music and songs are protected through organisations like PRS, ASCAP, BMI and the likes. Also if you do sign to a publisher make sure they believe in you and work your songs and are not there just to collect your royalties if and when you get some success. Take advice on any agreements you sign as your songs can be yours for life if you look after them and songs that sit around for thirty or forty years can suddenly find a new life and income.