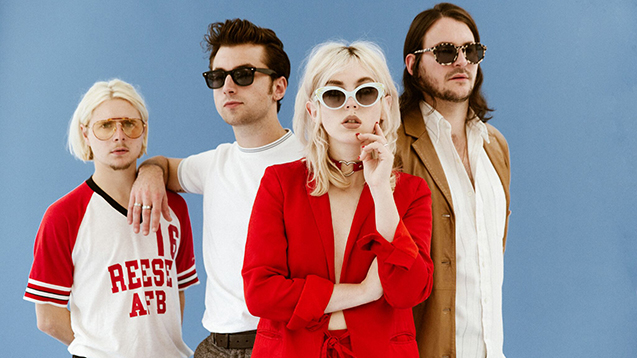 'When you love what you do so much, it’s really easy to fight for it' - Black Honey's creative force Izzy B Phillips on her unwavering vision plus what's in store for the band's long-awaited debut...

'You have to say, “This isn’t good enough,” and it’s not because I’m trying to be horrible – it’s because the artwork comes first, the music comes first. When you love what you do so much, it’s really easy to fight for it.'

Izzy B Phillips, songwriter, frontwoman and all-round creative force behind guitar-pop band Black Honey, is at home, chatting to us over the phone about learning to be a leader – and sticking it to anyone who gets in the way of her vision.

'We’ve done whole videos before which I’ve just scrapped. I want to make sure that people are actually seeing what I see, not a weird interpretation of what is in my head.'

We can just imagine her as she says that: draped over a mid-century sofa, phone in hand (vintage, naturally) and rolling her eyes in dramatic irony.

Then again, it's quite likely that we've summoned that image from the band's carefully crafted aesthetic. Since forming in 2014, they've conceptualised a visual identity to accompany their hypnotic sound, inspired by cult movies by Wes Anderson, Quentin Tarantino and Wim Wenders. All desert diners and gun-toting bombshell heroines, Izzy says she became ‘completely obsessed’ with how cinematography could play a role in the band’s output.

Now, with new single Bad Friends freshly unveiled, the band are set for another jam-packed summer of festival appearances plus a headline tour to be announced later in the year.

Here, in this extended interview taken from our feature The prism of vision: music and art in the digital age, we chat more to Izzy about the Black Honey aesthetic plus hear what's in store for their long-awaited debut album... 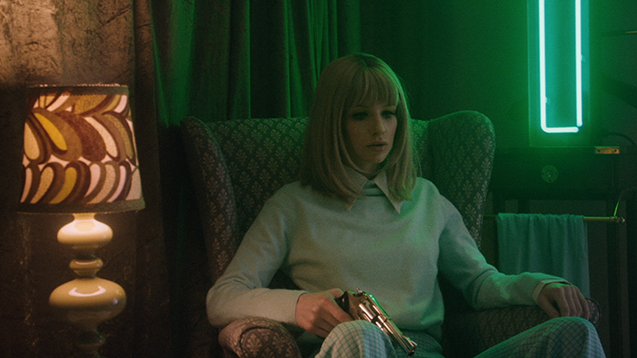 Did you have a vision in mind when you were first starting the band or did it start coming together once the music was written?

I think it was quite a gradual process really. I wrote Teenager when I was 17. I was subconsciously thinking in more cinematic terms when I wrote that, but I didn’t know it at the time. Then my ex-boyfriend started showing me Wes Anderson and Tarantino movies – cult things I’d never seen before – exposing me to the art side of cinema. I got completely obsessed. When that obsession got its grip on me, that’s when I started to see that I could take the songs further in the cinematic visual: I could visualise the music video as I was writing the song.

Now, everything is a part of cinema for me. It’s that feeling of when you’re on the bus and you have your headphones in: it’s a really transformative experience, like you’re starring in your own narrative. If you’re having a really shit day and you put on a sad song, it’s raining outside, and you forlornly stare out the window – it becomes like you’re living your own movie. That’s how I feel when I listen to music. I wanted to see if I can make other people feel the same.

So do you have a video in mind for every song you write?

Yes, pretty much. I’m so bombastic with ideas. I’m like, “Then they’re in the desert, and they’re shooting each other, and there’s a gun." I'm a lunatic that’s just watched way too many movies and has somehow manifested them into one vision. Most of the time we can’t afford to do the things that I want to do.

And yet the videos you’ve put out so far are so stylised and look pretty big production. It must be important to get them looking perfect?

Yes, it’s super important. We’ve done whole videos before which I’ve just scrapped. I want to make sure that people are actually seeing what I see, not a weird interpretation of what is in my head. If I do a few hours of research of videos, I hate all videos – even if they’re high-budget. I happen to detest what’s out there in the world, so I just really want to make something that I would want to see.


How important is artwork to you as a band?

It’s a luxury that I can show people how I see things through art. I’m really pedantic about artwork: I get really stressed out that it’s not right. I work with very particular people who I trust. I don’t like taking risks or experimenting. People’s interpretations of what we are and what we actually are are two really separate things. It’s the same with songwriting. I’ll only write with my friends who I really, really trust. I won’t write songs with any old guy. I’m quite particular about it.

The artwork’s important, but also it’s the songs that it comes down to at the end of the day. You could have the best artwork in the world but if you haven’t got a tune then what’s the fucking point?

Did you ever find it challenging to voice if something wasn't right?

When I was younger I was much more shy and I knew that I had this creative ability, but I didn’t know how to execute my ideas very well. I’m not a natural leader but I’ve just learned the skills to be one. You have to say, “This isn’t good enough,” and it’s not because I’m trying to be horrible – it’s because the artwork comes first, the music comes first. When you love what you do so much, it’s really easy to fight for it.

How did you find your gang of collaborators?

That’s the hardest bit about being an artist: finding people that you would trust with your work, and people that want to do it and aren’t going to charge you the earth. I think it’s about finding the proper future of their field and scouting them out. My whole thing is we’re not going to pay loads of money but we’re going to make art this is going to live forever. If they’re real artists, they’ll always be like, “Yes.” No one gives a fuck about the money side of things at this stage. It’s just about making something that’s meaningful. If I find someone I believe in, I’ll help them grow with me, and they’ll help me grow more. It’s a really good partnership. I learn so much from the people around me.

What about your partnership with Charlotte Patmore?

She’s my best friend. We totally set out as two young women with a vision from day one of: “We’re so fucking bored of the internet. Let’s make something that feels more sincere and has a bit more story to it than just, here’s a selfie." I’m so fucking bored of watching everyone show pictures of their breakfast or what makeup they’re wearing. We wanted to tell something that’s more sentimental.

The best thing about it was that there was no big shoot, no lights and fucking rentals. It was, “Come on tour. We get up in the morning, we go and find a location anywhere around and then you just shoot. That’s the rule.”


How important is merch to you as an independent band?

Merch feeds the band. Whenever you go to a gig, you pay your ticket at the gate but the band won’t really see the money from that. I just want to bring Black Honey to life as a more visceral experience. My favourite thing ever, in an almost narcissistic way, is when you play a show and you see every kid in the audience wearing your t-shirt. You feel like a proper squad.

What can you tell us about the new music that's up your sleeve?

The new single’s going to be a mad, absolutely bonkers disco song. We wrote it as a joke and everyone in our whole team walks around singing it because it’s such a earworm kind of song. It literally has a Macarena style dance. The video’s definitely going to involve it.

There’s almost a trap-inspired song. That one’s dividing opinions so much in our little team. I’m excited for the fact the album’s going to have loads of tunes on it that no one’s heard. I’m so bored of albums that have come out that are just the singles that are already released, and you’ve heard them a thousand times.

I’d say the rest of the vibe is schizophrenic. Its train of thought follows a romantic mood swing. It’s really moody. There’s a lot of sulking and eye-rolling across the whole album. The thing I’m most proud of, which I’ve never managed to do until recently, is be able to serve up a little bit of a punchline and cheeky wink. There are some real moments in it that are almost funny.

How do you approach writing?

It normally starts with me like, psychopathically scrawling my feelings into my journal. I’ve kept one for about 17 years – I’ve got 38 full books. I scan in drawings, everything. It starts with the emotional and then it grows from there. Sometimes I do that thing where I wake up and me and Davie Bowie have been writing songs together.

That’s the best dream ever!

You’ve said before that major record labels ruined all your favourite bands. Have you had any offers or are you 100 percent indie?

We’ve had offers. In a weird, hypocritical way we're kind of still working with majors, but in a way that works for us. We’re doing a licensing deal, the same route that Skepta took for grime. We don’t sign a huge advance and get millions of quid and then blow it all off, whilst people at major labels sit there and don’t do their jobs. We allocate our own marketing budget and we put our own strategy together but we have the facility to use in-house pluggers, or in-house people that do all the jobs in major labels.

The whole system of labels is fucked. Some kid is at their desk and then something lands in their lap and they have to work, like Black Honey or Taylor Swift. They’re never going to give the tiny bands the shot that they need. I really want the system to change and I know it’s going to really soon. It’s going to take a lot of money for me to sign my rights away to all of my music for the next ten years. Do you know what I mean?

Bad Friends, the single from Black Honey is streaming now.