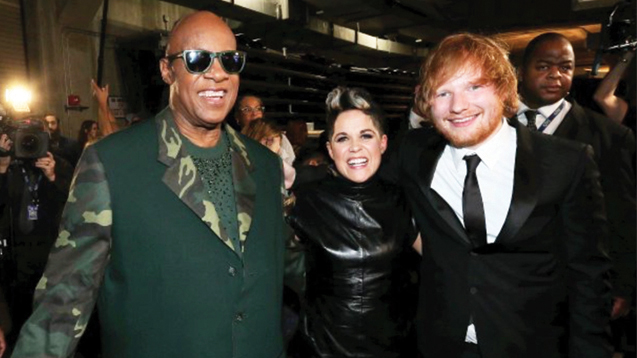 Amy Wadge spills the beans on her Grammy-winning Thinking Out Loud co-write with Ed Sheeran...

Bristolian singer-songwriter Amy Wadge (above with Stevie Wonder and Ed Sheeran) has co-written with scores of established and emerging artists over her 20-year career.

In that time she's worked with a surprisingly diverse clutch of acts from Janelle Monáe, James Blunt and Ms. Dynamite to Birdy, Dua Lipa and The Shires.

But she’s best known for her long term writing partnership with Ed Sheeran, who she met when he was just 17.

Together they spawned the chart-topping hit Thinking Out Loud in 2015, which appeared on Ed’s sophomore album x and bagged the pair the prestigious Song of the Year Award at the Grammys earlier this year.

Here, she tells us about how it came about...

I remember it all like it was yesterday. I wanted to visit Ed because we hadn’t seen each other properly for about a year - he’d been crazily busy. I drove up to his place in Suffolk with no intention of doing any writing.

He was in the shower, so I picked up a guitar and started singing what are now the first two lines of the song. This voice shouted down, ‘Wadge, what’s that?’ I replied, ‘I don’t know,’ and before long, I could hear him walking round upstairs – the tune in his head - singing, ‘take me into your loving arms.’

We stopped there because we went out for dinner with his mum. She invited me back for coffee, but Ed told her, ‘No, me and Wadge have got a song to write.’ When we got to the house we put together Thinking Out Loud in about 20 minutes; it just flew out.

Ed had lost his grandfather quite recently and there’s a song on the album called Afire Love, which is all about that. I remember that day we talked about his grandmother and how lost she was at the funeral without her lifetime partner. At the time, my mother-in-law was dying. Ever since my father-in-law had passed away 12 years before, she had lost the will to live. We discussed it, and how amazing it is to still be with the same person at 70.

Thinking Out Loud came from all of that emotion; from Ed losing family member and realising that actually, for most of us, it’s our ambition to have a lifelong companion. All those things you worry about when you’re young and in a relationship don’t mean a thing as you get older.

So that’s where my head was at the time but, like anything, I don’t know really know where the song came from. The lines just came out of my mouth. I hadn’t written them down anywhere; it wasn’t something I’d been thinking about until that point when I picked up the guitar.

We’ve always been a tag team, Ed and I. He says a line and then I say one. I don’t play; despite the fact that I played the guitar for the first two lines of on Thinking Out Loud to begin with. Ed is a much better guitarist than I am, so he always takes the guitar.

The first time I ever met him, when he was 17, we wrote nine songs in two days. We’ve always been super quick, and this session was no different. Ed is such a fast songwriter so together we’re like lightening! I think it comes from years of knowing each other really well. We’re not scared to say when things are rubbish or when they don’t work. There’s no pussyfooting around.

That day I went to visit, before we wrote Thinking Out Loud, Ed already played me the whole of what is now x. As far as he was concerned, the album was finished. But after we’d recorded the new song on his iPhone, and he played it through his speakers, he kept saying, ‘this one should be on the album.’

I told him not to worry – there would always be another album – and I drove away not knowing exactly what was going to happen with it. But by the time I got back to my home in Wales Ed rung me to say he’d recorded it straightaway, and I think it shows. His performance of that song is just extraordinary. If you really, really listen, there’s an authenticity to what he’s singing about and there’s a raw freshness to his vocals.

Soon after he told me it had made the album and by the following week, he’d decided it would be the third single. I remember the first time I saw him sing it was on Later… With Jools Holland. I was in the audience and I thought to myself, ‘this is going to change my life.’

If you’d asked me 20 years ago, I probably would have wanted it to be me singing that song, me in the spotlight. What’s been the greater surprise for me is the profound enjoyment I get from watching someone else sing. I’m a better writer than I ever was a performer.

Going on to win the Song of the Year Award at the Grammys in February was totally incredible and utterly surreal. I’m not even close to digesting it yet. I’m going back to LA again in two weeks to work with Ed and I’m really looking forward to sitting down with him and saying, ‘oh my god, that really happened!’ It was all a bit of a blur on the night but it was wonderful; it truly was.

http://amywadge.com/
Features
Back to top