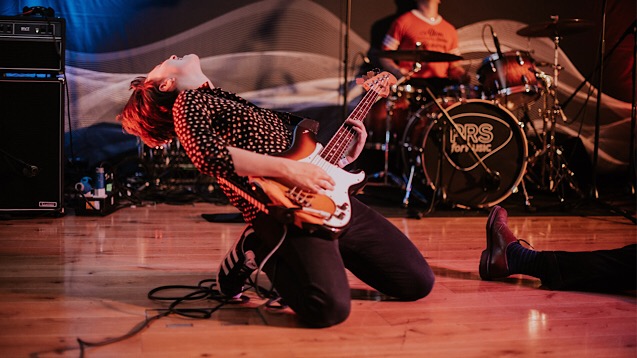 Armed with ferocious riffs and no-holds-barred lyrics of disillusionment, Hull punk-rock four-piece LIFE are a band that demand attention. Watch them tear the roof off at PRS Presents here...

Hull punk-rock four-piece LIFE are a band that demand attention.

Armed with ferocious riffs and no-holds-barred lyrics of disillusionment (Trump, Brexit, police violence), the staunchly DIY quartet have been tearing up stages from SXSW to Reeperbahn Festival in Hamburg over the past 12 months.

Their critically acclaimed debut album, Popular Music - produced and mixed by Grammy Award winner Ian Dowling - was self-released in 2017 and featured in BBC Radio 1’s Album of The Year 2017 list alongside releases from Stormzy, The xx and Jay Z.

Meanwhile over at radio, their raucous punked-up sonics have caught the ears of BBC Radio 1 and BBC Radio 6 Music, with frequent playlisting cementing their status as a band to take notice of.

Currently working on their second album with Luke Smith (Foals, Clor, Palace), they put on an electrifying performance at the latest PRS Presents gig and M was there to catch the action.

Watch it all kick off below...