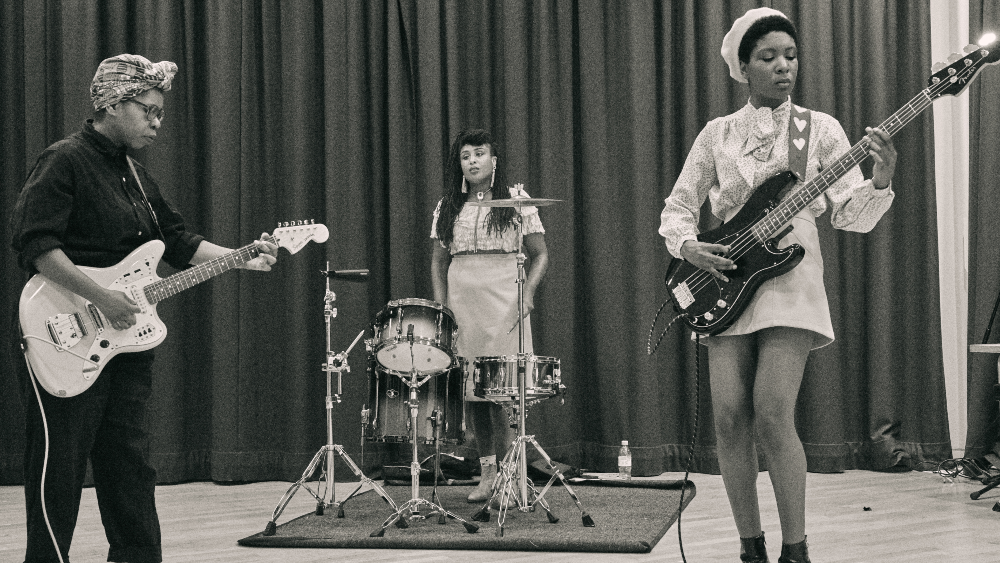 Black musicians have played an essential role in the history of alternative music yet are often overlooked in favour of their white counterparts because they don't fit the industry standard. Today, the next generation of indie and punk bands seem far more content to create music outside of what is expected. This week's Black History Month Guest Editor, Stephanie Phillips, explores how Black British artists have shaped the scene.

From Poly Styrene’s guttural cries against conformity to the angular, biting guitar riffs of Bloc Party’s Kele Okereke, the impact Black musicians have had on alternative music over the years has been immeasurable. For years, Black musicians and fans of alternative music often had to endure being the only people of colour in punk spaces, just to see their favourite band or play shows. As a punk on the London DIY scene for over a decade, most of my early show experiences were like that. Being the lone Black punk in the crowd, as well as dealing with incorrect assumptions that Black people don’t make that kind of music, has always been frustrating. In the last few years, thanks to the genre-flattening effect of streaming and social media, more Black bands and musicians are making a name for themselves in alternative music and are showing what can be created outside of what is expected from Black British musicians.

'For years, the incorrect assumption that alternative music is made for and by white people was held by many in the music industry and beyond. Ironic when you consider the origins of rock itself.'

For over a decade, the singer and guitarist Rachel Aggs has toured the world with her bands, starting Trash Kit and going on to form the post punk dance act Shopping and SAY award-winning Sacred Paws. As a mixed-race Black girl who spent her childhood in the English countryside, she was used to being one of a few queer people of colour around. Her upbringing playing folk music with her parents, awakening in riot grrrl and queercore music, and love of West African highlife, has led to the creation of her unique, buoyant guitar style rooted in Black culture.

Many other musicians also refuse to be confined to one specific genre, opting instead to apply a pick and mix methodology to their creative exploration. London duo Bob Vylan mix hardcore, punk and grime on their latest EP We Live Here, the title track of which tackles the bleak reality of the everyday racism they experienced in the UK: ‘Neighbours called me n***** / Told me to go back to my own country / Said since we arrived this place has got so ugly / But this is my fucking country / And it’s never been fucking lovely.’ It’s confusing that alternative music has become synonymous with whiteness given the catharsis found in distorted guitar music is a perfect vessel to let out the unrelenting anxiety felt living in a racist society, as Bob Vylan demonstrate.

For years, the incorrect assumption that alternative music is made for and by white people was held by many in the music industry and beyond. Ironic when you consider the origins of rock itself. Whether it was the guitar theatrics of Chuck Berry and Sister Rosetta Tharpe influencing Elvis, Led Zeppelin and Eric Clapton’s heavy referencing from early blues, or the reggae and ska beats that propelled the Clash and The Slits, Black music has always been shimmering heart of rock music.

Though Black artists have always been creative in every genre, their legacy is often misremembered, and their approach often misunderstood. As one of the few bands with Black members in the ‘90s, Skunk Anansie were determined to express the sexism, racism and homophobia lead singer Skin experienced but were often met with both explicit and subtler forms of racism. Speaking to The Observer, Skin said: ‘Black women from Tina Tuner to Grace Jones and Mel B are perceived as aggressive, overtly sexual, animalistic, panthers in cages. The industry then was owned and run by middle-aged white men. If you weren’t sexual they didn’t know what to do with you. You made them feel uncomfortable, because you weren’t playing the game.’

The band often complained of being miscategorised as soul or R&B by industry executives, unable to understand the band’s clear rock influences with their own ideas of what Black people should sound like. Today, for many Black alternative musicians very little has changed and artists still feel they are overlooked for deals and industry support because they don’t fit the mould. Speaking to Pitchfork about the struggles Black indie artists face, digital coordinator at Terrorbird, Sabrina Lomax, said: ‘Anybody who knows anything about the music industry knows that most music isn’t profitable, but there’s this sense that Black music is not valuable unless it’s profitable. It speaks to real racism in the label world because, if it was always a matter of making money, no artists would get signed.’

'As Black people clamour for more diversity in their scenes and artists search for new ways to platform themselves, the music industry would be wise to keep the momentum going on this unavoidable train.'

There are ways that Black people are trying to reclaim their rightful place in the genre. I’m one of the organisers of Decolonise Fest, an annual event dedicated to platforming and remembering punks of colour. Starting in 2017, the festival’s success was largely due to people of colour of all ages who were tired of feeling alone in their individual scenes and were no longer happy to settle with the liberal racism they experienced. Following on from the success of Afropunk in the states, the idea of a more eccentric vision of Black creativity began to resurge in the mainstream. Paired with the rising accessibility of home recordings and sites like Bandcamp that streamline the promotion and sales of a record, Black artists were able to sidestep the label route and release lo-fi punk that didn’t follow the rules of any particular genre.

There are signs that Black artists are being given more of a chance to pierce through the noise. The bass-heavy rap-rock duo Nova Twins recently announced their spot at next year’s Reading festival, an event known more for the organisers’ inability to book female acts than it is for being progressive. Singer-songwriter Michael Kiwanuka made headlines recently when his indie rock and ‘60s soul indebted third album, Kiwanuka, won the Mercury prize.

As Black people clamour for more diversity in their scenes and artists search for new ways to platform themselves, the music industry would be wise to keep the momentum going on this unavoidable train.