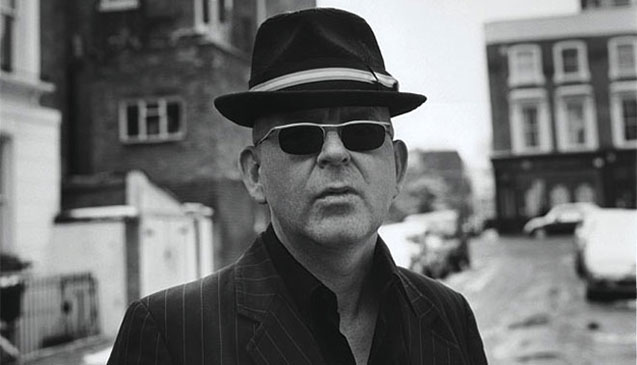 'It was my ambition to have my own religion, but Bill Drummond told me I was nuts - what an indictment!: Alan McGee on the crazy Creation years...

Indie auteur Alan McGee has played a leading role in shaping the sounds and style of British culture for more than 30 years.

As founder of Creation Records, he has been responsible for committing some of guitar music’s best loved bands to wax, including Primal Scream, House of Love, My Bloody Valentine, Teenage Fanclub and Oasis.

From discovering these acts to helping shape their sound and meteoric rise, the Glaswegian mogel ushered in new game-changing genres from acid house-drenched indie to shoegaze and Britpop - earning him legendary status and even entry into Number 10 to meet Prime Minister Tony Blair.

After a lengthy hiatus from the business, Alan has spent recent years with his old pals the Happy Mondays and Jesus and Mary Chain, as they hit the road again with new material to fuel them.

We popped down to new Hoxton record shop Matters of Vinyl Importance last night (Tuesday) to catch a live Q&A covering his journey from working class Glasgow to running one of Britain’s best loved indie labels. This is what we learned…

On religion
It was my ambition to have my own religion. That’s not a joke, but I was on drugs [at the time]. I thought to myself, 'Who’s crazy enough?' If I said I was in touch with the supreme being I could probably start getting money out of Americans. Maybe 10 grand per 100 people. I thought, 'Who’s fucking nuts enough to buy this? Bill Drummond!' I went to see him at JAM Studios in North London and told him, ‘I want to start my own religion. Let’s do it together.’ He said, ‘You’re fucking nuts!’ It’s an indictment when Bill Drummond thinks you’re nuts!

On the House of Love
The House of Love were a band who should've just stuck to the beers! They were great… but there were too many drugs in that situation. We used to take them to [Danny Rampling’s club] Shoom and [Paul Oakenfold’s club] Spectrum and places like that. But they just shouldn’t have taken drugs. It loosened Terry Bickers off to the point he got into mental health issues, but he was probably going there anyway. And Guy [Chadwick] just shouldn’t have done it anyway - and then they fell out. They’re honest these days, especially Terry, about how they looked to U2 [for inspiration]. Even if they just got halfway up the Christmas tree they’d have absolutely killed it, cos they were great.

On being clean-living these days
I was sitting with Shaun, Gaz and Paul [from the Happy Mondays] discussing soya milk on the last tour. I’m just thinking, ‘These guys used to sell me drugs. This is fucking nuts!’ Their girlfriends were there and everything. They must’ve thought we were idiots for talking on about almond-soya milk.

On his career
Was I about the money? Yeh! I’m just being honest. But it was about music – and it still is about music. I was talking to a taxi driver the other day and he asked what I do. I told him I’m an old guy managing old guys. He started laughing. There’s a business in that model, with people like the Mondays and the Mary Chain, it’s a tangible model. It’s so fucking difficult these days, and I’m not saying I know the route to goal anymore, but I know the route for your Shaun Ryders and Jim Reids.

On first meeting Liam Gallagher
In 1993 you didn’t get people like that in indie bands, but you did get good looking drug dealers. So I thought, ‘He’s gotta be the drug dealer’, but he was the singer.

On signing Oasis
It was the most unbelievable thing. I stopped playing their demo to anyone cos I thought we’d never get them. They were already above the radar. Creation was always good when nobody was looking and I signed the Fanclub or the Valentines. We were great at picking up bands that no one thought there was any future in and making it good. This one [Oasis] was obviously going to do well, and there were two or three other people interested, but Noel did keep his word.

On riding high with the band
Back then I could tell the editor of the Evening Standard to fuck off, that was the power of Oasis. We were untouchable. The band realised that the record label they were signing to were as nuts as they were – and they were getting off on us being nuts.

On meeting Michael Jackson
I was in Japan [in late 1992] and Michael Jackson was doing eight nights at the Tokyo Dome. I did not give a toss about meeting him, but the person who did was playing a gig in a club down the road – Bobby Gillespie. They wouldn’t let Bobby near MJ but they let me. He was gutted… So I went in the room to meet MJ and my bottle went. He was really tall and seemed really big and skinny. They told me to announce myself, but when I get nervous I go really Scottish. So I said, ‘Alan McGee’ [in the thickest accent]! I didn’t think he was going to be great, but he was fucking unbelievable.

On bands he wished he’d signed
I was gutted I didn't sign The Stone Roses or Nirvana. But I was nowhere near either of them. I think Geoff Travis [Rough Trade founder] was the closest to getting The Stone Roses. I would loved to have signed Nirvana too, but that happens.

On new guitar music
I think hip-hop is the new rock n roll, if I’m being honest. What I’m doing with these older bands is niche. They can all make great records, but they’re for people of my age. For young people, [music] is good. People who get the idea that music is rubbish now are wrong.