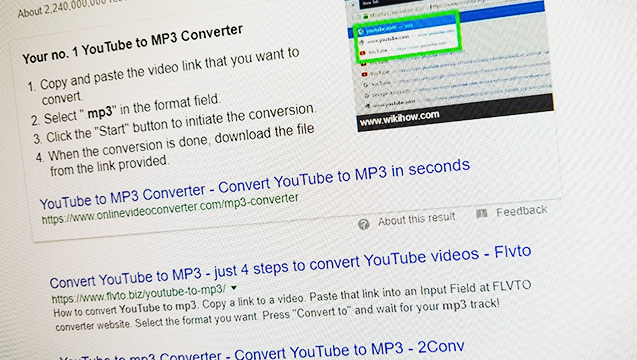 Websites dedicated to pirating music from YouTube are causing trouble. 35% of 16-24-year olds are ‘stream-ripping’ music - and that number is set to rise.

Websites dedicated to pirating music from YouTube are still presenting a big issue for the music industry, with 35 percent of 16-24-year olds ‘stream ripping’ music from the platform, according to an IFPI report.

The IFPI, which represent the interests of the recording industry worldwide, claim in its 2017 Music Consumer Insight Report that this figure is estimated to rise to as much as 53 percent in the coming years.

The process of stream-ripping involves taking the sound from a YouTube video, often music, and converting it to an MP3 file before downloading the audio without paying rightsholders.

Websites that facilitate this process are still attracting millions of visitors every year, despite the rise of free streaming services which effectively eliminate the requirement for music piracy.

2016 saw the beginning of a crackdown on these sites by major record companies in the UK and US, the results of which have seen many stream-ripping sites closed down like MP3Fiber, which was shut down this week following legal pressures.

However, a huge number of these sites remain active and are profiting massively through hosting monetised adverts on their sites, taking money away from songwriters, performers and rightsholders.

The British Phonographic Industry (BPI) are among the names fighting to remove these illegal stream-ripping sites from the internet and encouraging users to listen to their music through legitimate free channels.

In an interview with The Independent, Geoff Taylor, chief executive of the BPI said: ‘Although coordinated action by the record industry is delivering results, with major platforms like YouTube-mp3 closed down, we must continue to act against illegal sites that build huge fortunes by ripping off artists and labels.

‘We hope that responsible advertisers, search engines and hosting providers will also reflect on the ethics of supporting sites that enrich themselves by defrauding creators.’

The platform’s terms of service state explicitly that it prohibits the downloading or copying of videos on YouTube without the consent of rights holders and YouTube claim to be taking appropriate action when they are notified of an ‘infringing tool’.

However, a quick Google search of the term ‘YouTube to MP3’ reveals around 2.24bn results with hundreds of how-to guides and user-friendly options that simply require users to paste in YouTube links and hit ‘download’ to receive their music.

Some digital rights groups claim that these stream ripping sites provide a legitimate service and that closing them all down would be the wrong course of action.

The reality for the music industry, as said by Taylor, is that the work done by streaming services and the industry is being undermined by the presence of these websites and the rampant music piracy they allow.

Currently, The IFPI estimate that 96 percent of internet users are consuming licensed music. But with the number of people illegally downloading from YouTube on the rise year on year, that rate of consumption may begin to fall if the issue is not confronted.
News
Back to top
Close