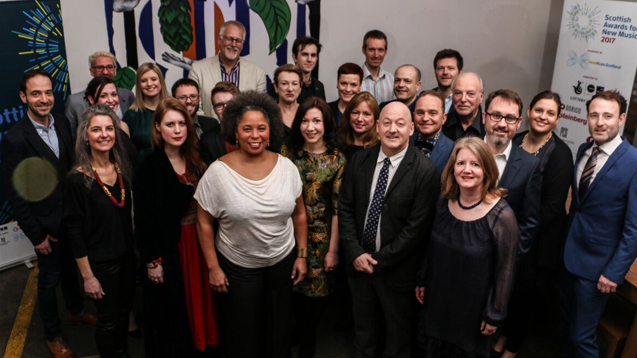 Helen Grime, Robert Irvine and Ailie Robertson were among the winners of the Scottish Awards for New Music.

Helen Grime, Robert Irvine and Ailie Robertson were among the winners of the Scottish Awards for New Music.

Taking place on 8 March in Glasgow, the awards were created with support from Creative Scotland to celebrate and champion the highest standards and achievements of Scotland’s composers, musicians, sound artists and ensembles. PRS for Music sponsored the large scale work category won by Helen Grime.

It aims to highlight the innovative, experimental and ground-breaking work taking place and showcase breadth of the country’s contemporary music scene.

The event featured performances from the award-winner of the recorded new work category, cellist Robert Irvine, and award-nominee performance artist and musician, MacGillivray.

Alan Morrison, Creative Scotland head of music, said: ‘With such an amazingly strong set of nominees across each of the categories, the inaugural New Music Scotland Awards have instantly claimed their place on the classical calendar.

‘These are the performers, composers and ensembles who are driving forward one of Scotland’s most exciting and experimental music sectors. Congratulations to tonight’s winners and also to the venues, festivals and record labels who bring their work to an increasingly eager public.’

There were over a 180 nominations submitted by artists, audience members and the general public, reinforcing the depth and breadth of new music activity in Scotland.

The seven winners of the Scottish Awards for New Music 2017 are, in no particular order: