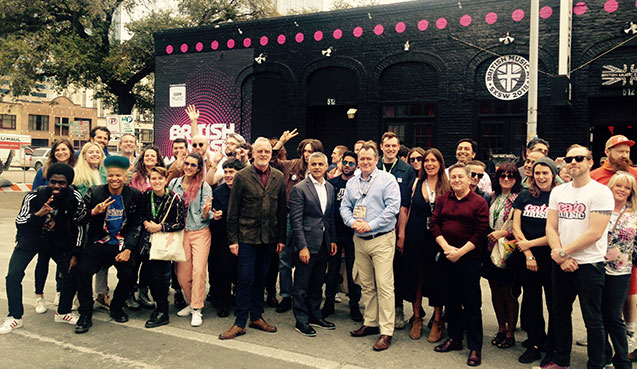 Blue Lab Beats, Rachel K Collier, Chagall and Otzeki were among the artists to meet with Mayor of London at SXSW to discuss the future of British music.

Blue Lab Beats, Rachel K Collier, Chagall and Otzeki were among the artists to meet with Mayor of London Sadiq Khan yesterday (Sunday) at SXSW to discuss the future of British music.

Khan attended the gathering, organised by UK Music’s Michael Dugher and Musicians’ Union’s Horace Trubridge, to hear from the artists about how his office can support their work both in London and around the UK.

Khan pointed to his involvement in the recent introduction of the Agent of Change principle, which offers a lifeline to grassroots music venues at threat from closure due to redevelopment projects.

He also referred to the scrapping of London Metropolitan Police’s Form 696, which discriminated against urban and grime music events across the capital.

‘The cultural benefits of music – the joy and nourishment it gives to us – is something I’m really proud of,’ he acknowledged.

‘One of the reasons London is so well known around the world is our music heritage. Whether you’re an artist, whether you run a live music venue, organise gigs or are a music publisher, you’ve contributed to London being renowned for who we are – open-minded, outward-looking innovators.’

Also gathered in the audience was Chris McCrory, from Glasgow band Catholic Action, who put to Khan: ‘I produce bands and work in London a lot. Many of the artists we work with worry that London’s status as a cultural capital is coming to an end because of the lack of affordable social housing.

'It’s more affordable for me to commute to work from Glasgow to London. We can roughly just about afford to be an artist, and I’m wondering how London is going to sustain that.’

Khan replied: ‘I agree. The average income of an artist in London – including musicians – is £10,000 per year. Not everyone is an Adele or Stormzy or Ed Sheeran. One of the biggest problems is the cost of living in London and the lack of affordable housing, the cost of transport, the cost of getting a studio, and on and on.’

He went on to outline some of the initiatives aimed at redressing the issue, including redrawing the definition of affordable housing, freezing public transport fares and overseeing the creation of new living/work spaces for artists to rehearse and record in.

Khan also took questions on the need to protect music education in schools and addressing the transfer of value from music to digital service providers.

The event took place at the British Music Embassy, the UK's official SXSW showcase event and partnership between AIM, BBC Music, the Department for International Trade, PPL and PRS for Music.

Khan is currently at the showcase in Austin, Texas, to deliver a keynote speech for the tech conference strand.
News
Back to top
Close