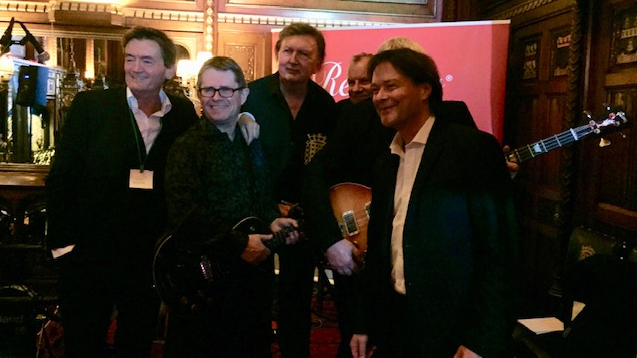 Rock ’n’ rolling politicians MP4 have released an EP in support of Musicians Against Homelessness, launching it at a star-studded gig inside the Houses of Parliament on 25th October.

Do You See Me? is a poignant and moving plea to passers-by written from the point of view of a rough sleeper.

The band (pictured above with Feargal Sharkey and Simon Darlow) said: 'When Musicians Against Homelessness approached MP4 to put on a gig in the House Of Commons we knew we had to say yes. Not only did we agree to their request, but also we pledged to release a record to highlight the cause. Homelessness is a complex issue requiring more political action. But we also know, as a cross-party group of MPs, that to get results we need to keep awareness high.'

MP4 are the only band in history to have been granted permission to perform in the State Rooms of the Speaker’s House in the Palace of Westminster.