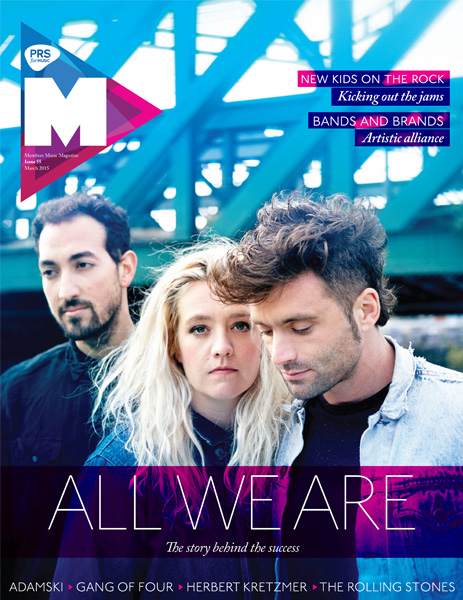 Check out the latest print edition of M magazine. This quarter we profile Liverpool success story All We Are, one of the UK’s most underrated songwriters Herbert Kretzmer and take a look at the new rock revival spearheaded by Royal Blood...

Welcome to M55, the latest print edition of M magazine and first of 2015.

This quarter our cover stars are the Liverpool-based All We Are – a psych-pop trio who’ve have a phenomenal 18 months. We spend time with the band and their producer Dan Carey to chart their route to success, which has been aided by the PRS for Music Foundation

We celebrate the genius of one of the UK’s most underrated songwriters. From Les Miserables to Kinky Boots, Peter Sellars to George Martin, Herbert Kretzmer has an impeccable track record that spans hit musicals, TV shows and pop gems.

British rock made a comeback in 2014 and we met some of the bands at the forefront of the new metal revolution. We hear from rowdy duos Royal Blood and Slaves on the current state of play, and from PINS’ front woman Faith Holgate on the route to independence.

We delve deep again for Picture This and look back at the iconic Rolling Stones gig at Hyde Park 1969 from music aficionado Andrew King – the man who hosted the gig and was tasked with releasing thousands of white butterflies live on stage to honour the death of Brian Jones.

As usual, we’ve tapped up some interesting members for our perennial I Wrote That, 60 Seconds and Sound Effect pieces, while business news explores the ongoing digital debate.

We hope you enjoy this issue and find some time to jump over to M online to check out all the added extras we couldn't fit in the mag...