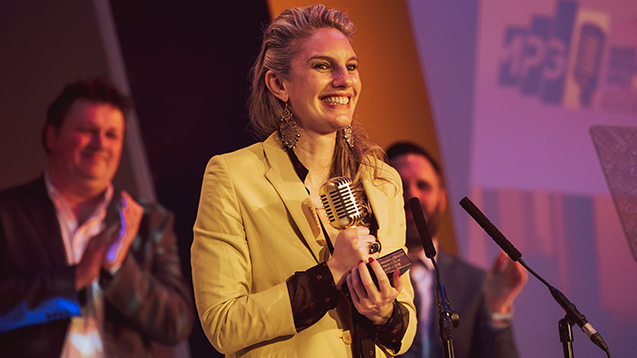 Catherine Marks took away the top accolade of UK Producer Of The Year at the ceremony last night in London.

The winners of the Music Producers Guild (MPG) Awards 2018 were announced last night in London, with Catherine Marks (pictured) awarded the top accolade of UK Producer Of The Year.

Marks previously won MPG’s Breakthrough Producer Of The Year Award in 2016 and was nominated this year for her work on The Amazons’ self-titled album, Manchester Orchestra’s A Black Mile To The Surface and The Big Moon’s Love In The 4th Dimension.

Her other production, mixing and engineering credits include Wolf Alice, Foals, PJ Harvey, Kanye West, MIA and The Killers.

A total of five gongs went to women on the night, with organising saying it proves, 'beyond doubt that music production is no longer a male dominated business.'

As previously announced, PRS for Music board member Imogen Heap received the prestigious Inspiration Award, which MPG award to a recording professional who they believe to be, ‘responsible for a body of work that has significantly inspired others’.

The pair have overseen some of the most memorable albums of the past 40 years, developing a sound dubbed as 'That English Pop Thing' and working with artists including Madness, Morrissey, Elvis Costello, Bush, Dexys Midnight Runners and Aztec Camera.

Tony Platt, MPG Awards Managing Director, said: 'We are delighted to be celebrating 10 years of MPG Awards and it is especially encouraging to see the emergence of so much fresh new talent alongside the success of earlier breakthrough winners and the deserved recognition for more established talent.

'I think we have every right to be proud of the milestone this represents - long may it continue!'

UK Album Of The Year, sponsored by Universal Audio
Glass Animals – How To Be A Human

Re-mixer Of The Year, sponsored by Novation
UNKLE

Breakthrough Producer Of The Year, sponsored by Focusrite
Jolyon Thomas

Breakthrough Engineer Of The Year, sponsored by Genelec
Marta Salogni

Studio Of The Year, sponsored by RME
Abbey Road

The A&R Award, sponsored by The Association of Independent Music (AIM)
Jane Third