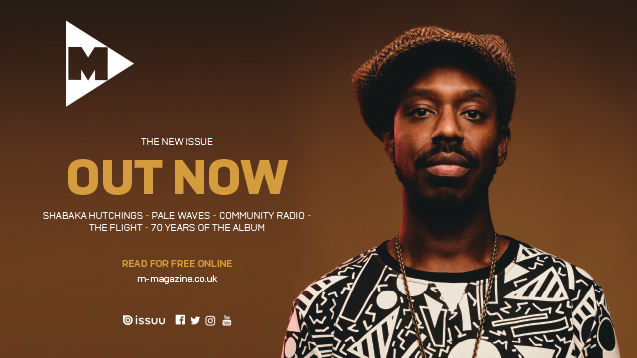 We’re excited to announce the autumn edition of M magazine is now available.

This issue, we meet visionary Shabaka Hutchings, the formidable force behind Britain’s jazz resurgence, to learn what makes him tick.

The Mercury Prize-nominated band leader, saxophonist and composer, who is now mentor to a whole new generation of talent, gives his take on a UK tradition flourishing in the 21st century and unpacks the tension between composition and improvisation.

We also spend some time with rising indie-pop quartet Pale Waves to learn about life inside one of the world’s most hotly-tipped new bands and find out how they went from zero to hero in less than two years.

In our Platinum Status feature, we ask what lies ahead for the album format, which celebrates its 70th birthday this October. Artists including Anna Calvi and MNEK share their thoughts, while industry experts examine how the format can thrive in the streaming age.

Elsewhere, we’re tuning into community radio to uncover a hyperlocal scene that’s breathing new life into the airwaves. From music veterans DJ Paulette and Trevor Jackson to the brains behind Reprezent, Soho Radio and more, we learn how it’s evolved and where it’s headed.

You’ll also hear from award-winning composer duo The Flight on the making of their epic score to the latest Assassin’s Creed videogame, and electronic auteur Bishi on her latest venture.

See below to read the full issue online now…