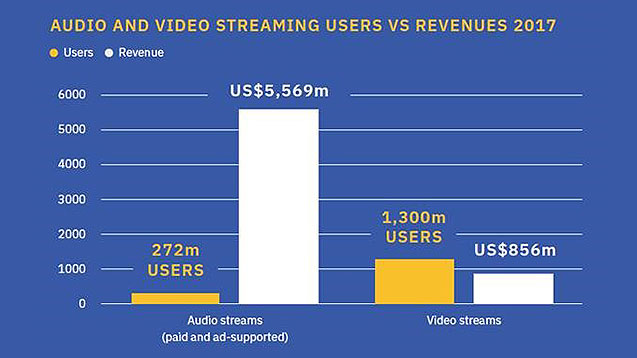 The IFPI has used its 2018 Global Music Report to call out unlicensed and under-licensed video streaming platforms which are avoiding paying millions to rightsholders for the use of their music.

The IFPI, the international trade body for recorded music, has used its 2018 Global Music Report to call out unlicensed and under-licensed video streaming platforms which are avoiding paying millions to rightsholders for the use of their music.

Between them, these unlicensed or under-licensed platforms have the world’s largest on-demand music audience, which IFPI estimates to be more than 1,300 million users (see image above).

However, the revenue returning to rightsholders, including songwriters and publishers, in 2017 amounted to just $856m (£613m).

In contrast, licensed audio subscription services (both paid and ad-supported), which had a much smaller userbase of 272 million in 2017, contributed $5.6bn (£4bn).

The IFPI stated: ‘There must be a fair digital marketplace where all the participants play by the same fair rules. The sustainable and balanced growth of the digital content market continues to be undermined by a fundamental flaw in legislation underpinning the market that has created a “value gap” [also known as the transfer of value], a mismatch between the value that online user upload services, such as YouTube, extract from music and the revenue returned to the music community.

‘It is currently the biggest policy challenge facing the music industry. For music to thrive in a digital world, those that are creating and investing in music must be able to negotiate fair commercial terms for its use.

‘Furthermore, digital music services that are licensing music on freely negotiated terms, must be allowed to compete on a level playing field – something they currently do not have. The global music community is united in its call to fix the value gap and is campaigning around the world for a legislative solution.’

Elsewhere, the report found that the global recorded music market grew by 8.1 percent in 2017 to $17.3bn, its third consecutive year of growth since IFPI began tracking the market in 1997.

But, despite the recent uplift, revenues are still only 68.4 percent of the market’s peak in 1999.

In 2017, streaming remained the main driver of recovering revenues. For the first time, it became the single largest revenue source with 176 million users of paid streaming services contributing to year-on-year streaming growth of 41.1 percent.

Streaming now accounts for 38.4 percent of total recorded music revenue, while total digital income last year made up more than half of all revenue (54 percent) for the first time.

Frances Moore, chief executive of the IFPI, said: ‘The industry is on a positive path of recovery but it’s very clear that the race is far from won.

‘Record companies are continuing in their efforts to put the industry back onto a stable path and, to that end, we are continuing our campaign to fix the value gap. This is not just essential for music to thrive in today’s global market, but to create the right – fair – environment for it to do so in the future.’