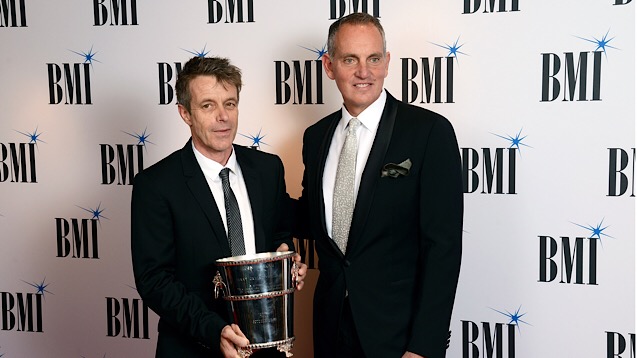 Gregson-Williams (pictured, left, with BMI president and chief executive, Mike O'Neill) has become one of Hollywood's most sought-after and prolific composers, scoring for films including The Chronicles of Narnia: The Lion, the Witch and the Wardrobe, X-Men Origins: Wolverine, The Martian, and the Shrek franchise.

The composer was awarded in recognition of 'his unique and indelible influence on generations of music makers.' He joins previous recipients including Sting, Queen, Ray Davies, Van Morrison and Bryan Ferry.

Elsewhere, Ed Sheeran and Johnny McDaid picked up the Song of the Year award for Shape Of You, marking Sheeran's third consecutive year of scooping the accolade.

Last year, he won for Love Yourself, as performed by Justin Bieber, and in 2016 for his song Thinking Out Loud.

The night also saw Natasha Bedingfield presented with the BMI Million-Air award for five million performances of her song Unwritten. Trevor Rabin received the same award for Owner Of A Lonely Heart, as performed by Yes.

Meanwhile, Liam Payne and James Arthur received awards for Strip That Down and Tinie Tempah’s publishing company Imhotep Music Ltd was honoured for Passionfruit, as performed by Drake.

Other winners on the night were Caroline Ailin and Ian Kirkpatrick for New Rules as performed by Dua Lipa, Sam Smith for Too Good At Goodbyes and Jamie Hartman for Human as performed by Rag’n’Bone Man.

For the full list of winners, visit BMI.com here.
News
Back to top
Close