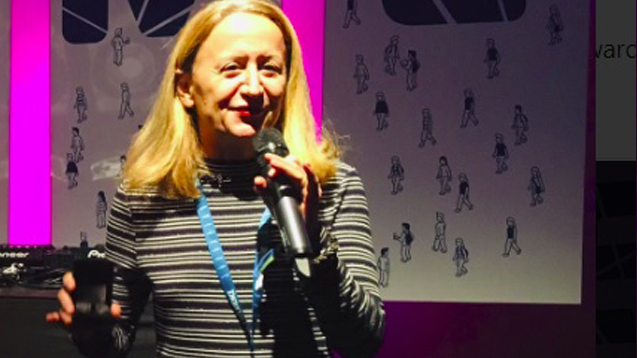 Georgia Taglietti is the lastest recipent of PRS Foundation's Keychange 'Inspiration Award'. Georgia is the Director of the Barcelona branch of shesaid.so and Communications & Digital Director, Head of International Media at Sonar.

This Spanish Keychange Inspiration award was presented at the recent BIME festival by music composer, DJ & Creative, Cora Novoa who said: “Geo is one of the most inspiring women I have ever met: hardworker, positive, eager to connect people and projects, creative, a culture and technology lover, but above all what fascinates me is her desire to create a new path for new generations through art and positive values.”

Upon receiving the Inspiration Award, Georgia Taglietti said, “Four years ago, my life was starting to shift into a new direction. I was introduced by a friend to the shesaid.so network. From that point on, my professional and personal life has been deeply enriched by new friends, colleagues and a new sense of purpose. I am profoundly honoured to be given this award, which in my heart also awards shesaid.so and its founder Andreea Magdalina. I also wish to thank all the women who have inspired me in this professional path. My wish is to keep mentoring and being mentored in order to sustain the growth and the presence of women in the music industry."

Vanessa Reed, CEO of PRS Foundation and founder of Keychange added her congratulations: "Everyone I meet has something positive to say about Geo, she is a fantastic role model for women working in the music industry, not only for her work with the brilliant shesaid.so network but also her impressive career in the live music sector including over 20 years at Sonar music festival.”

Keychange is a pioneering international initiative which is empowering women to transform the future of the music industry and encouraging festivals to achieve a 50:50 balance by 2022. Keychange aims to accelerate change and create a better, more inclusive music industry for present and future generations.

The Keychange Inspiration Award honours and celebrates female pioneers who have made an extraordinary contribution to music and are role models for the next generation and for the Keychange network of 60 talented female artists and industry professionals. Keychange partners select an Inspiration Award winner in each of their countries.

See keychange.eu to learn more or sign up to the initiative.

www.shesaid.so
News
Back to top
Close