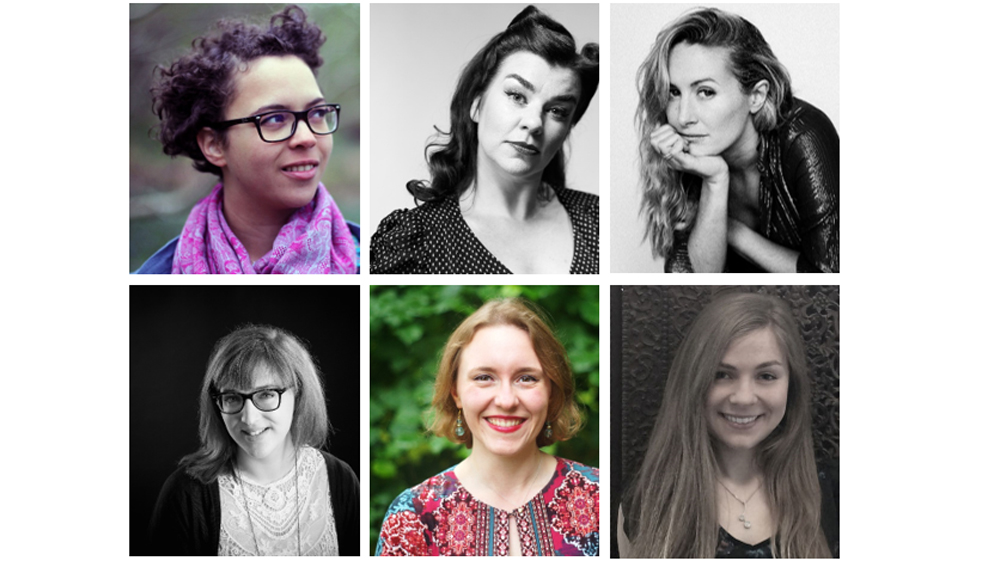 Six composers from across the UK and a range of specialisms have been selected to take part in Wild Plum Songbook, an innovative new career development initiative.

PRS for Music
has partnered with Wild Plum Arts and Cheltenham Music Festival for
the scheme, which will see composers receive feedback from renowned composers
Joanna Lee and Errollyn Wallen. Professional development and practical
workshops over the course of two days will see their works for mezzo-soprano
and piano performed and recorded by Rachael Lloyd and Lana Bode.

Wild Plum Arts and Cheltenham Music Festival will commission one of the works from the workshops to be premiered during Cheltenham Music Festival’s Composium – a new one-day industry-wide event for composers, publishers, music industry leaders and influencers. The chosen work will also be included in the Wild Plum Songbook, a growing portfolio of newly-commissioned works.

The selected composers, pictured above clockwise from top left, are:

Ella
Jarman-Pinto, a
Cumbria-based composer whose recent commissions include a short film with Maker
Projects that won a Bronze award at Cannes Lion for Cinematography in 2018.
Ella was Composer in Residence with Streetwise Opera from 2016-17 and has received
repeat performances and broadcasts by the BBC Singers on BBC Radio 3.

Janet Oates, a composer, teacher, performer and
conductor in a range of musical styles and genres. Janet is also Artistic
Director of the new vocal ensemble Philomel, specialising in 17th century works
and new commissions, with a focus on female composers. Last year, a Borough New
Music concert was dedicated to her works.

Kate Marlais, currently the Cameron Mackintosh Resident
Composer at Lyric Theatre, Hammersmith. She has been nominated for a Best
Composer Stage Debut Award for her work on Abandon. Last year, Kate set up
Modulate, an initiative for female composers for stage, supporting the move
towards 50:50 gender balance in the industry.

Rose Miranda
Hall, an award-winning
composer whose work focuses on telling narratives that challenge common
preconceptions through opera and contemporary music theatre. Her work has been
performed across the UK, Germany, Hong Kong and Canada; current projects
include opera ‘Dead Equal’ which will headline Army@TheFringe 2019, and
participatory community chamber opera ‘The Jewel Merchants’.

Sarah Lianne
Lewis, who has worked with
the BBC National Orchestra of Wales, Quatuor Bozzini, UPROAR, and Ligeti
Quartet, and is currently working with the Royal Scottish National Orchestra
and the Berkeley Ensemble. Her music explores semi-improvisatory techniques,
Japanese poetry and patterns in nature, and has been performed and broadcast in
Europe, Canada and Australia.

Harriet Wybor, Classical Account Manager, PRS for Music, said: “I am delighted to welcome these composers to the Wild Plum Songbook initiative and look forward to hearing the results of their workshops. We recognise the importance of career development in the classical sector, and it’s great to continue our support for composers through this partnership with Wild Plum Arts and Cheltenham Music Festival.”

Lucy Schaufer, Artistic Director, Wild Plum Arts, said: “Wild Plum Arts dedicates 2019 to All About the Women, and this mentorship initiative for The Wild Plum Songbook presents an ideal opportunity for us to support women composers in the beginning of their careers as well as those already confident in their artistic identity. We are grateful to our partners PRS for Music and the Cheltenham Music Festival and we look forward to working with these six incredibly talented women.”

Alison Balsom, Artistic Director, Cheltenham Music Festival, said: “Cheltenham Music Festival has for 75 years been synonymous with world-leading composition and we want our new Composium to become an essential event in the calendar for the classical music industry. At its heart will be the chance to hear brand new work and we are incredibly excited that one of these composer's new works will come to fruition at the Composium in July, thanks to our joint commission with Wild Plum Arts.”