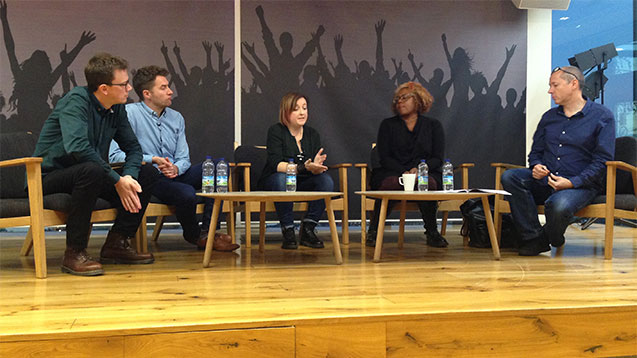 Addressing the audience gathered at PRS for Music’s annual Composer Seminar last week, he questioned how many composers in the room were learning about the recording process and self-producing their own material.

When asking for a show of numbers, more than half the 200 composers present raised their hands.

Murcott, who chaired the Why Record New Music? session, said that in pop music, the home studio is everything, suggesting this may be becoming the case within the classical community too.

And, while classical music sales may not be spectacular, there are plenty of opportunities open to the composers who take steps to record their work.

He was joined by composers Mark Bowden and Errollyn Wallen, plus Ellie Wilson (NMC Recordings) and Tom McKinney (BBC Radio 3), who all shared their views on the classical record industry and the rise of the composer-performer and composer-producer.

Murcott: As a classical composer, why record your music?

Wallen: In the old days you could send scores out to people and they might look at it. These days, to have a recording not only makes it easier for someone to hear that work but also for the composer it’s a way for you to be part of the performance practice of your music. It’s so necessary, you’re immediately global in a way. It’s promotional and archival. You are part of the realization of the work.

If you’ve been involved closely with the recording, it does produce a useful document for anyone else performing your music. There’s some communication between what you imagine the performance to be and their interpretation. It transcends the limits of the score. Music notation is incredible but there are limitations.

Murcott: What about simply the emotional reason for composers?

Wallen: I think it’s every composer’s responsibility to get their music out in the world, so [recording] is the ultimate.

Murcott: What about money – has that ever been a reason to record classical music?

Bowden: I think it certainly has in the past, I have older colleagues who say that making CDs in the nineties was an income – but it’s not for me.

Wilson: You’ve got to realise know that there’s longevity in recordings, especially now with streaming and the way it works with your back catalogue. It does bring in income and it helps instigate licensing opportunities.

Murcott: Should recordings replicate the live performance or do they have a separate identity?

McKinney: I get frustrated when orchestras or ensembles record with no intention of performing what they’ve just played in a live setting. Knocking things together bar-by-bar is soul-destroying. What I want from a recording is the intention that it would always be played live. It doesn’t sit well with me to just record something in isolation, because I know the ease of editing now.

Murcott: What about new skillsets - do composers need to be producers now?

Bowden: Engineering is an art form in itself. I’m always amazed how much engineers hear that I don’t. The skillset of an engineer is incredible – the recording stands or falls on the basis of how good they are.

Murcott: We keep using the term classical music, but I wonder if we’re not ever-so-slightly uncomfortable with that now…

Wallen: I think contemporary classical is the term.

Wilson: We use the term ‘new music’ a lot, but it means nothing to someone outside the industry. Contemporary classical seems to work for publications like Gramophone and BBC Music Magazine – they understand it in relation to NMC.

Murcott: In pop music, the home studio is everything. Is this the same with classical? Who might mix their own recordings at home in this room? Can we have a show of hands? [half the room, around 100 people, raised their hand.]

Bowden: I’ve mixed a lot of my own recordings and made my own archival recordings. I’ve improved performance recordings and incorporated things from rehearsals – I think they’re really important skills for all composers.

Murcott: Today’s composers are becoming producers by proxy, as part of the job…

Wallen: Well, I think it’s important to remember that the study of recording is distinct to composing.

McKinney: I think you can do it at home but a great producer or sound engineer is invaluable.

Murcott: Distribution of recordings is changing dramatically – how is that affecting NMC?

Wilson: We have to embrace streaming if that’s how people want to listen to music – and playlists are the absolute way forward to get music heard. You have to accept that there are engaged listeners and passive listeners, and we have to provide music in all sorts of different ways.

Murcott: How about the recording as a promotional tool?

Peter Maxwell Davies told me that having a recording of your work is like having a calling card. You’ve got something in your hand you can give to people to listen to. I know that publishers are delighted when we create a recording because they can use that to get new commissions and new artists performing that work. The recording is the starting point and everything branches out from that. The sales might not be amazing from the recording but the potential you get from having that recording is as much as you want to make of it.